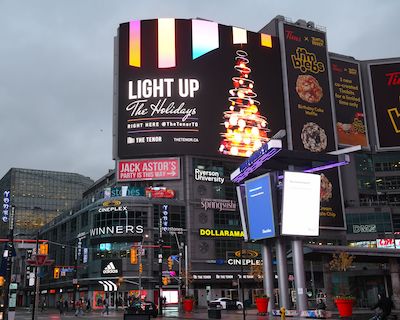 BentallGreenOak has renamed 10 Dundas Street East in Toronto as The Tenor, the latest step in a major revitalization for the office and commercial property. (Courtesy BentallGreenOak)

The BentallGreenOak-managed mixed-use building formerly known by its 10 Dundas Street East address in Toronto has been rebranded The Tenor as part of its ongoing renewal.

The Tenor name is a play on both the building’s address and its number of floors.

“We did some focus groups with millennials and it resonated,” general manager Bob Emond told RENX. “It’s simple and easy to remember and it just flows.”

The renaming is part of a multi-year re-investment strategy that has included the installation of one of Canada’s largest outdoor digital billboards, which cost more than $2 million. Redoing all of the media boards within The Tenor will take place next year.

A number of giveaways, events and performances are taking place this month as part of the rebranding of the building.

Little Canada was a turning point

Emond became general manager at the building in 2018 as BentallGreenOak was looking to elevate its presence. The following year it welcomed Little Canada to a 45,000-square-foot space on a multi-year lease.

“That got the wheels turning on how we could best present ourselves to the public as more than 10 Dundas,” said Emond.

Little Canada is a one-of-a-kind interactive attraction that takes visitors on an immersive journey across Canada in miniature.

Its planned July 1, 2020 launch was delayed by COVID-19, but it’s open now and is expected to attract more than 250,000 annual visitors — with a long-term goal of 500,000, including tourists and students on educational field trips.

Tenants at The Tenor

The Tenor was built in 2008 and is owned by 10 Dundas Street Ltd. The 10-storey building includes 268,392 square feet of retail space, with larger tenants including Winners, Adidas and Dollarama.

The fully leased structure also includes a Cineplex movie theatre with 24 screens, almost half of which double as Ryerson University lecture rooms during the day. In addition to its food court, The Tenor’s Jack Astor’s, Milestones and Spring Sushi restaurants all have balconies overlooking the city.

“We’re not the Eaton Centre,” said Emond. “What we really are is a destination for entertainment.”

Even The Tenor’s 63,502 square feet of office space houses arts and tourism-related tenants, including Toronto Film School and Destination Ontario.

Emond said The Tenor was receiving more than 800,000 monthly visitors pre-pandemic and he looks forward to 3,000 to 4,000 students a day using it once in-person classes begin again at Ryerson and Toronto Film School.

They’ll be returning to a place that won this year’s The Outstanding Building of the Year (TOBY) Award for enclosed retail buildings from BOMA International. It already had a BOMA BEST Gold certification and a TOBY Award from BOMA Canada.

TOBY Awards recognize quality in commercial buildings and reward excellence in building management. The awards program begins at the local level and culminates in the international awards. All facets of building operations are evaluated, including community involvement, site management and environmental policies and procedures.

Emond said more than a dozen binders looking at all aspects of operations within The Tenor — including best practices, environmental impact, waste reduction, recycling, tenant engagement, social responsibility, community involvement and building appearance — were put together in preparation for the award application.

“We’re very, very proud of the entire team,” he said, citing The Tenor’s in-house marketing and operations employees and its partners, from janitorial services to security personnel.

The Tenor’s large exterior digital signs complement those on other buildings overlooking Yonge-Dundas Square, which has led to the public space being compared to New York City’s Times Square.

Emond is also a Downtown Yonge Business Improvement Area board member and said the Yonge-Dundas corridor revitalization, of which The Tenor is a part, remains a work in progress.

While the pandemic has cut back on events and programming in Yonge-Dundas Square, there are plans to create a pedestrian-only area from Gould Street south to the square for special events.

“We think that the future is bright,” said Emond. “We want to get back to revitalizing the square so Yonge and Dundas is truly seen as the heart of Toronto — a place to be and a place to be seen.”

Steve McLean Commercial Transactions Toronto / GTA Dec. 8 2021
Steve McLean Business reporter
Steve is a veteran writer, reporter, editor and communications specialist whose work has appeared in a wide variety of print and online outlets. He’s the author of the book Hot Canadian Bands and has taught reporting to college students. He is based in Toronto.