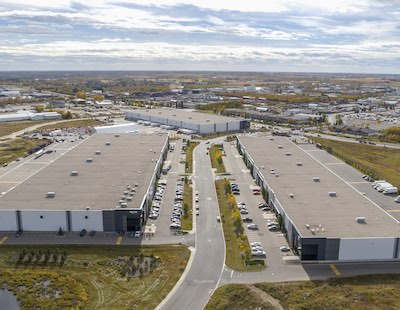 Three buildings in the Henday Industrial Park in Edmonton, comprising 618,363 square feet of core industrial real estate and 3.5 acres of outdoor storage, have been purchased by BentallGreenOak.

The park’s sale was facilitated by the CBRE National Investment Team on behalf of One Properties, CPP Investments and Walton.

“You look at where it’s located: I’ve got Yellowhead (Trail) to the north. I can access Anthony Henday (Drive) in literally minutes. So that gets me north, south, east, west. So major transportation corridors are crucial and this is like centre ice in the northwest,” Young told RENX. “I think the quality of the construction of the buildings, the rent roll of the assets, great quality tenants, go to the potential growth in the Alberta economy.”

The property was 98 per cent occupied at the time of sale.

No sale price was released, but Young said it was the second-largest industrial deal done this year in Edmonton just behind Northport Business Park, which Crestpoint Real Estate Investments Ltd. bought for $116 million.

“We are very happy to be able to continue to execute on our strategy of expanding BGO’s industrial footprint, in response to the acceleration of e-commerce and the growing importance of modern, well-situated logistics centres in Canada,” said Michael Fraidakis, managing director at BentallGreenOak, in a statement sent to RENX.

BentallGreenOak is the real estate arm of Sun Life.

“The vendors are in discussions to continue to potentially add more space to the park,” he said.

According to CBRE’s most recent industrial real estate report, the Edmonton market has seen a “vigorous pace” for lease and sale activity so far in 2021 due to the “increasingly robust” warehousing and distribution sectors.

“I think like every other major industrial market the logistics business has really taken off. I would say that at no other point in my career – and I’ve been doing this for 31 years – I have never seen this many large industrial users in the market at once. I would say that’s consistent with Calgary and Edmonton, but Edmonton in particular,” said Young.

“I would suggest to you that COVID, and the supply chain issues that the planet saw, has forced a lot of these users to revisit their logistic line, their ability to get the product to market.

“In Edmonton, if you’re a large user in the northwest right now and you’re over 100,000 square feet there are not very many quality options. I think this is going to spur a bit more development. . . . There’s lots of activity going on right now in the large-bay distribution market.

“I will say too that the smaller-bay product is starting to move. It was quite slow during COVID. It was quite small because it was oil and gas-related but we’re starting to see some absorption even in the small-bay as well. I just think it goes to show you the strength of the industrial business in the province.”

On its website, Arrow Engineering says the three large buildings on the Henday Industrial Park site were designed to meet the needs of a variety of tenants.

“Each building was developed to be versatile and changeable, depending on the tenant’s space and operational requirements,” it says.

Arrow completed the civil engineering of the project, including the underground and service design for storm and sanitary water systems, as well as surface work to tie the site into the adjacent subdivisions, roadways, and nearby railways.

The transaction is the second major piece of industrial news in Edmonton the past two weeks, following the announcement of a massive 2.9-million-square-foot Amazon robotics fulfillment centre, which is being constructed by Panattoni Development Co.

That site is located just a few blocks away in the Highland Business Park, just outside the Edmonton border in Parkland County.

Don Wilcox Commercial Development Ontario Jul. 8 2021
M
Mario Toneguzzi Business reporter
Mario Toneguzzi, based in Calgary has 37 years of experience as a daily newspaper writer, columnist and editor. He worked for 35 years at the Calgary Herald covering sports, crime, politics, health, city and breaking news, and business. For 12 years as a business writer, his main beats were commercial and residential real estate, retail, small business and general economic news. He nows works on his own as a freelance writer and consultant in communications and media relations/training.