A wave of sublease office space will soon come onto the Montreal market, presenting “incredible o... 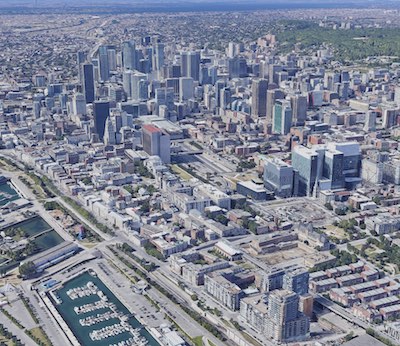 A significant amount of sublease space will soon come onto the Montreal office market. (Google Maps)

A wave of sublease office space will soon come onto the Montreal market, presenting “incredible opportunities” to tenants who remain bullish on offices during the COVID-19 pandemic.

That was one of the sentiments expressed at a virtual session on office leasing during the Montreal Real Estate Forum on Oct. 6.

The amount of sublets coming to market started to take off in August, said Erik Langburt, executive vice-president of Cushman & Wakefield in Montreal.

“We anticipate that’s going to continue to happen until at least the end of the year. That’s a big story.”

For tenants who have concluded the office is where they want to be over the long term and have a handle on how many employees are going to be coming back, “this is going to be a feeding frenzy,” Langburt said.

“They’re going to have their pick of the space that they want. Sublets are going to present incredible opportunities for them.”

Noting his firm has done transactions on a few sublets, Langburt said discounts are already much steeper than prior to the pandemic.

“Pre-COVID, we were getting full recovery and beyond on most of the sublets that were on the market,” he said. “The discounts are starting to be pretty steep on sublets, because companies just want to get them off their books.”

Nick Ceravolo, director of leasing at property management firm Groupe Petra, said property owners and managers cannot ignore the fact sublease space will come on to the market, but must remain confident in their product.

“It’s just the packages will be done differently and be packaged differently.”

Although current government regulations allow offices to be filled at 25 per cent capacity, they are only at about five to seven per cent capacity downtown, said André Plourde, senior vice-president at Colliers International in Montreal. “It’s very depressing.”

As long as the situation continues, it will be difficult for momentum in the market to pick up and transaction activity will remain low, he said. Still, “we’re still not seeing a decline in rents or an increase in lease incentives.”

There is not an enormous amount of inventory in the pipeline, Plourde said. Much of the available space is in the 100,000- to 125,000-square-foot range, or in buildings that are highly sought-after by tech firms.

He’s not concerned about the impact the new National Bank head office will have on vacancies. The bank is building a 40-storey head office at 800 Saint-Jacques St. W. that will be one of the city’s tallest office buildings.

Most of the space the bank will vacate is at 600 and 700 de la Gauchetière St. W., both of which have new owners, Kevric and Allied Properties REIT, respectively.

They are “repositioning those assets, investing heavily in them, making them more modern and more appealing,” Plourde noted.

In addition, the National Bank tower will not be delivered until 2023, “so we still have a couple of years until that space gets back to the market.”

Plourde said the fundamentals of the Montreal market were so positive prior to the pandemic “it’s going to take a lot more time of difficult conditions to impact the market.” So, he’s cautiously optimistic about the future.

Langburt said there have been many “positive green shoots” during COVID-19, citing gaming, tech, medical and e-commerce companies which have expanded their office space.

“That is a testament to the diversified economy that Montreal built for itself prior to the pandemic.”

He said Montreal’s office space market is not overbuilt and the space that is projected is “very conservative.”

Ceravolo said the pandemic has shown working from home can work in terms of productivity, but there is no replacing the collaboration and face-to-face contact office space provides.

However, there will be a rethink of office space utilization post-pandemic. What will likely result is many more enclosed offices, conference rooms and spread-out work stations. “I think we’re going to go back to where we were 10 years ago,” he said.

Plourde predicted about 25 per cent of employees will want to work from home one or two days per week but this will not result in an increase in vacancy.

While it’s too early to tell what will happen with work from home, Langburt says the enthusiasm seen earlier in the pandemic has started to decline.

Given what he’s heard from clients and the media, he estimates about 80 per cent of office employees would like to come back to the office two to three days a week.

This was validated by a recent Google survey reporting 62 per cent of its employees would like to return to the office, but not on a full-time basis.

“The longer the pandemic goes on, the better the case for the office becomes.”

Danny Kucharsky Residential Development Greater Montreal Oct. 14 2020
D
Danny Kucharsky Business reporter
Danny is a multiple award-winning journalist based in Montreal, who has written for about 75 magazines and newspapers in Canada and the U.S. His credits include The Globe and Mail, Montreal Gazette, Maclean's, Chicago Tribune and a wide variety of business, specialized trade and medical magazines. Danny was also the Montreal correspondent for Marketing Magazine for several years.