Vicano Construction Ltd. and its development arm are riding a wave of industrial expansion in Sou... 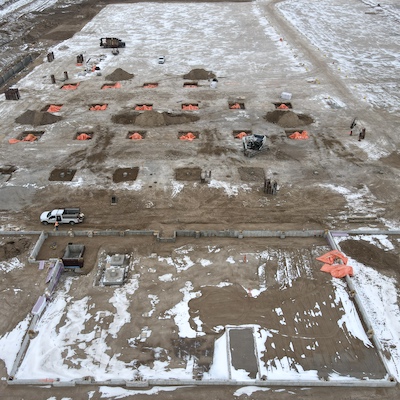 Vicano Construction and developments has broken ground on this 518,705-square-foot distribution centre in Brantford. RENX has confirmed the facility is being constructed for Hershey.

Vicano Construction Ltd. and its development arm are riding a wave of industrial expansion in Southwestern Ontario, including the construction of a new 518,705-square-foot distribution centre in its home city of Brantford.

The family-owned and operated company was founded in 1973 by its president Peter Vicano. Today it is active on multiple fronts, including land acquisition to add to its development pipeline.

Vicano has just closed on an 85-acre block of employment-designated land in Brant County likely destined for light industrial or distribution and has another 30-acre parcel under contract.

However, its current major focus is the large warehouse project on Oak Park Road in Brantford. It’s just a few hundred metres from Hwy. 403, which connects the region to the rest of Ontario and the U.S. border.

Although the firm can’t comment on the building owner, RENX has confirmed it is being constructed for U.S.-based candy and food producer Hershey.

“We had (the land) under contract for about six months. We were prepared to develop a distribution warehouse here for someone,” Peter Vicano said of the property. “Word got around that we had this property and we were going to be erecting a distribution centre.”

About the Brantford distribution centre

Construction started in the fall, with completion scheduled for December 2021. The $50-million facility will include a two-storey office area, as well as the distribution centre with 40-foot clear ceiling heights and 80 dock-level truck loading bays.

The refrigerated facility is being built on a 56-acre property which offers ample parking, including spaces for 371 trucks.

It’s the first project in the Oak Park extension of Brantford’s northwest industrial area. Vicano said it was able to get virtually all of the required approvals within a very expedient three-and-a-half months in order to accommodate the tight construction timeline.

The sprawling property was formerly a gravel pit operated by TCA Aggregates (part of the James Dick Construction group of companies).

Vicano is acting as the designer and builder for the site, which is how it prefers to operate.

“It’s a good example that we are a one-stop shop,” said Marc Vicano, a project manager, construction. “We are able to manage the entire process from site selection to all the approvals through to construction.

“To use the word turnkey, that gets thrown around, we do everything here to get them actually in the door, from the time of weeds growing in the ground to the time that they’ve got trucks coming in.”

Marc is one of three brothers now heavily involved in the business. Michael Vicano is also a project manager, construction while Paul Vicano is the company’s vice-president of development.

While Vicano is working on increasingly large projects today, that wasn’t always the case.

“I started 46 years ago in 1974,” Peter said when asked about the company’s early days. “I graduated from Mohawk College as an architectural technologist.

“Worked for an engineering company in Hamilton for three years and when I came to understand that designing buildings wasn’t the way I wanted to get ahead in life, I started a construction business without having any construction experience whatsoever.

“We slowly grew into what we are today. We grew at a very slow pace, by the way. Slow but sure and methodical where we took the little risks. That is really to this day our mantra; we do not take too many risks whatsoever.”

After focusing on construction for about 15 years, Peter also stepped into development, creating Vicano Developments Ltd.

“That started maybe about 30 years ago, where we just decided at one point to build for ourselves instead of just for clients.

“We did a little project in downtown Brantford, a little two-storey office building. I don’t know how we financed it, but we did. The bank worked with us and we eventually sold it and made a few bucks and were able to do another one.”

“For about 30 years we have been developing property for ourselves. We have a fairly significant portfolio of industrial buildings, commercial buildings . . . including a student residence building in downtown Brantford.”

Today, Vicano has a build-and-hold philosophy for its development projects.

“It has been that way for a long time,” Peter said. “It wasn’t at first, mind you. At first, it was to create and sell so that we could do another project because we just didn’t have the equity or the financial partners.”

In addition to the Hershey project, Vicano recently completed a 535,000-square-foot project across Oak Park Road for another client and is building a 135,000-square-foot freezer/cold storage facility in Brantford.

It is also continuing to build its land bank in Southwestern Ontario, as demand for industrial and distribution space increases in the so-called Greater Golden Horseshoe and other areas ringing the Greater Toronto Area. Brantford is about an hour west of downtown Toronto.

“We’ve got a fairly large inventory recognizing that what’s hot today is no doubt industrial and distribution,” Paul Vicano said.

“Even with COVID, we are getting a lot more calls from food distributors, cold storage and e-retailers who have a need to buy their own or lease their own real estate to quickly distribute to their customers.”

High prices and lack of available land are forcing companies into outlying areas. With its lower land and leasing costs, and its location between the GTA and the U.S., border, Brantford is increasingly attractive.

“Land was relatively inexpensive up until about the past 12 months and it is going up now quite a bit. Where we might have seen land prices at $250,000 an acre 18 or 24 months ago, now they are probably hitting $400,000 an acre. Brantford is probably catching that GTA wave of supply and demand.”

The Vicanos expect that to keep them busy for the foreseeable future.

“We’re getting more and more calls from Toronto real estate brokers acting on behalf of clients looking for half a million square feet,” Paul said.

“We get a half-million-square-foot building every decade in Brantford, if that. (But), with what I’ve seen in the past six months, we’re getting calls every month from somebody looking for that size of a building.”