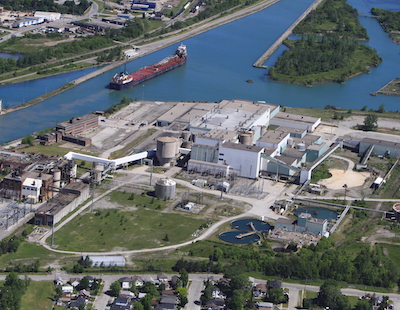 HOPA Ports and Bioveld plan to turn this site along the Welland Canal at Thorold, Ont., into the first of a series of multimodal hubs as part of the Niagara Ports development plan. (Courtesy HOPA)

A new Thorold Multimodal Hub in Southern Ontario offers more than 500,000 square feet of indoor warehouse and 200 acres of outdoor storage and material handling space that can be configured to suit diverse industrial operations.

The hub, located on the Welland Canal in Ontario’s Niagara Region just 30 minutes from the American border, is comprised of space owned by HOPA Ports and a 155-acre former paper mill owned by Bioveld Canada Inc. The facility will be managed by HOPA Ports, through its Great Lakes Port Management subsidiary, which also offers development services.

“Our goals are to increase cargo volumes and attract more investment into Niagara,” HOPA Ports commercial vice-president Jeremy Dunn told RENX. “We’ve had a ton of support from the economic development people and local businesses and local governments.”

Creation of the hub is the first concrete step in the “Niagara Ports” plan to create a corridor of multimodal industrial hubs along the Welland Canal. The plan was launched by HOPA Ports and Niagara civic stakeholders in September.

Other hubs, in nearby Port Colborne and Welland, are also attracting interest while still only in the conceptual stages.

“We’re trying to develop the Niagara Trade Corridor, which is something that various levels of government have gotten behind and are working on,” said Dunn. “These are major investments, so it’s important to get them right and make sure we understand them and are designing them for the right user groups.”

Dunn said the company has invested more than $350 million in the Hamilton site over the past 10 years and is willing to use its experience and knowledge from that undertaking to work with tenants that commit to Thorold.

That includes building-out space and investing along with them to better their businesses.

“When we’re building grain terminals in Hamilton, customers aren’t comfortable making those investments on land that’s not theirs,” said Dunn. “So we can offer leases of up to 60 years in duration and we can put skin into the game, which often helps assuage their concerns.”

Some parts of the hub are already operating, while more leases are being finalized and HOPA Ports is making its way through a number of letters of intent from interested businesses.

“What we’re trying to do is offer marine and transportation-served assets in Hamilton, Niagara and Oshawa,” said Dunn. “What we’re doing is creating multimodal spaces across these areas to facilitate trade and to help support Ontario industries.”

Available spaces at the Thorold hub range from 2,000 square feet to 50 acres and include a central warehouse, several other warehousing sites, a truck dock and bays, a train shed, manufacturing shops, a wood shop, an auto shop and offices. Leases will include indoor, outdoor, turnkey and develop-to-suit options.

“One space has eight truck-loading docks and a couple of overhead doors adjacent with direct access to indoor trans-loading,” said Dunn, “and there are quite a number of dividing walls in there with other spaces.

“We have another section with 50-foot ceilings that would allow for high racking and warehousing. We have some other spaces with rail and truck lines coming in adjacent to open spaces.”

Dunn thinks the hub is appropriate for any company that ships or receives goods. He said it’s garnering much attention from companies that ship to the Northeastern United States and Canada.

Canadian National Railway has a rail yard just south of the hub and its lines serve the site, which allows for marine loading and unloading. There’s significant outdoor storage space for rail cars and one line goes directly into a heated warehouse with capacity to hold eight rail cars.

“That really lends itself to the trans-loading of paper or steel or any other type of product or consumer good that would need to be kept dry for direct rail to warehousing purposes,” said Dunn.

The hub also features easy truck access via Hwy. 58, and it’s one traffic light away from Ontario’s 400 series of highways.

In addition to HOPA Ports and Bioveld, which specializes in the productive repurposing of brownfield and industrial sites, Transport Canada also owns land along the canal.

“All of these parties are working together to develop this terminal,” said Dunn. “Our strategy is to align different partners along common objectives to grow industry.”

Due to this alignment of goals and the scarcity of marine-served industrial properties, Dunn said HOPA Ports has a “buy, hold and develop” strategy and no intention of selling any of the hub’s land or assets.

Steve McLean Commercial Development Toronto / GTA Jan. 11 2021
Steve McLean Business reporter
Steve is a veteran writer, reporter, editor and communications specialist whose work has appeared in a wide variety of print and online outlets. He’s the author of the book Hot Canadian Bands and has taught reporting to college students. He is based in Toronto.