A new business park under development in Winnipeg is yet another sign of an industrial real estat... 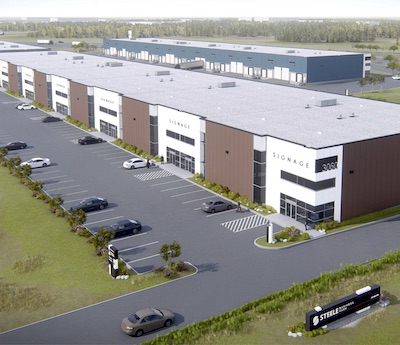 A new business park under development in Winnipeg is yet another sign of an industrial real estate revival taking place in the Manitoba capital thanks to its burgeoning inland port.

“It’s a good time to be in industrial real estate, finally, in Manitoba,” Martin McGarry, president and CEO of MMI, told RENX in an interview.

Industrial development had been a slow-moving segment of the city’s commercial real estate market for several years, he explained.

However, that’s changed in the last two years after a significant portion of CentrePort gained access to key infrastructure, including a $220-million highway along with water, sewer and other critical utilities.

“It’s taken a while to get all the infrastructure, planning and zoning done,” admitted Diane Gray, president and CEO of CentrePort Canada In. She said the inland port has been more than a decade in the works. “But, now we’re really seeing the development get going and the MMI project is one of the latest examples of that.”

The inland port, once fully developed, will be the largest in North America.

Officially launched in 2009, CentrePort has been slowly gaining momentum due to its key location. Adjacent to the James Armstrong Richardson International Airport — which offers 24-hour cargo services – and serviced by three class-1 railways, it is a true tri-modal transportation centre.

In addition, 70 per cent of Manitoba’s trucking companies are also located at the inland port, which services Central and Northern Canada along with the Midwest United States.

As such, it had been on the radar of many companies.

However, only after key infrastructure was in place did development surge, Gray said: “We’ve been able to attract about approximately 100 new companies,” since services were added to CentrePort’s northern portion, which is just outside Winnipeg city limits.

To that end, 2019 saw a 10-fold increase over 2018 with more than $117 million in development and building permits issued for CentrePort, according to Colliers International.

That momentum has continued through the fall of 2020, a subsequent Colliers report noted, with CentrePort accounting for more than half of total square footage of industrial development in Winnipeg (528,100 square feet) during Q3 2020.

Most CentrePort development to date has occurred outside the city’s western border in the Rural Municipality of Rosser, which recently built a new wastewater treatment plant servicing the inland port’s northern district.

That said, the developable land available inside Winnipeg is also significant in scope, with 500 acres zoned for residential and another 1,100 for industrial development.

“The city has just completed a servicing design study to look at bringing its lands into development,” said Gray, noting the Winnipeg section of CentrePort still lacks water, sewer and other services.

As with its most recent developments, future projects must achieve five sustainable development goals that encourage “companies to look at energy efficiency” along with other considerations like connectivity to active transportation and setting aside greenspace, Gray said.

MMI’s Steele Business Park, for example, will include high-efficiency unit heaters and windows, as well as roofing and parking lot pads made from recycled materials. The business park will also feature water-efficient landscaping which does not require an irrigation system.

The multi-tenant development was designed for maximum flexibly to meet the needs of businesses involved in warehousing, distribution and logistics.

Like most industrial projects designed for multiple tenants, Steele Business Park is being built on spec.

“It’s that old adage: you build it and they will come,” he said.

The project includes features like 28-foot clearance, as well as two dock doors and one grade-level door for every 6,000 square feet of floorspace.

Pandemic an opportunity for CentrePort

Phase 1 can accommodate up to 13 tenants, but McGarry expects it will likely be home to three or four businesses. That’s based on early interest, which has been brisk despite the economic uncertainty of the pandemic. In fact, the pandemic has been a bit of silver lining for the development, he suggested.

Moreover, developers outside Manitoba, previously considering projects at CentrePort, are putting plans on hold as they grapple with the pandemic’s impact on existing portfolios.

“In short, it’s taken some competition out of the equation for us,” he said.

Even with competition, Steele Business Park should find no shortage of prospective tenants given the recent success of other new multi-tenant developments at CentrePort.

“The first industrial park, over 100 acres in size, came to market in 2018 and sold out in six months,” Gray said, noting uptake has been similar with other developments.

As McGarry put it, CentrePort offers a complete package of amenities for logistics, manufacturing, warehousing and distribution companies.

“There have always been good reasons to be in Winnipeg,” McGarry said. “But now with CentrePort, those reasons are speaking louder than ever to these firms.”

Steve McLean Commercial Market Trends National Dec. 23 2020
J
Joel Schlesinger Journalist
Joel is a Winnipeg writer covering a wide variety of topics from personal finance and real estate to health and fitness. His work has appeared in many major Canadian daily newspapers, including the Winnipeg Free Press, Vancouver Sun and The Globe and Mail.