After plummeting in the second quarter and improving in Q3, confidence in the Canadian real estat... 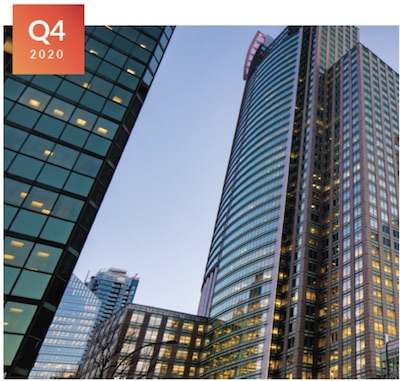 After plummeting in the second quarter and improving in Q3, confidence in the Canadian real estate market waned slightly heading into year-end, according to the Q4 2020 REALPAC/FPL Canadian Real Estate Sentiment Survey.

The survey captured the thoughts of a variety of industry leaders, including chief executive officers, presidents, board members and executives from a broad set of sectors, including owners and asset managers, financial services providers, and operators and related service providers.

Data was collected in October 2020 and the report includes anonymous excerpts from interviews with participants as well as the survey data.

When asked to compare current market conditions to the situation a year earlier, 32 per cent of Canadian respondents believed they were much worse.

The sentiment in the United States wasn’t far off from that.

Uncertainty remained in the Canadian real estate market moving into 2021, though there was some optimism about vaccines reducing COVID-19 concerns.

Three per cent of Canadian respondents thought general real estate market conditions will be much worse in a year.

A selection of quotes from respondents:

– “I would describe market conditions at a lower level in Q4 2020 versus 2019, but still stable and reasonable. There’s high liquidity in the marketplace for mortgage debt and refinance opportunities are very solid. We are seeing fewer transactions as there are not as many sales. Refinancing or repositioning financing and development financing are all quite strong.”

– “The next 12 months will see a tremendous number of small businesses fold and the result will be much higher vacancies, lower rents and higher cap rates. Overall, 2021 and 2022 will be very difficult for commercial real estate; however, the downturn will be good for transactions in the later part of 2021 and much of 2022.”

– “(There are) more unknowns today than at any given time in the last 20 years. With the exception of hospitality and retail, private markets are slower to react as players in the market try to digest. (There’s a) slow realization that previously unassailable sectors like office and residential will be impacted, but the extent is a question mark. If unemployment remains where it is for a period of time, and government support ebbs, it will have an impact across the spectrum. The biggest factors in a recovery are treatments/vaccines for COVID-19 as well as continued government support and a subsequent stimulus/recovery plan.”

No respondents believed they will be much higher. All of those numbers closely mirror those from the U.S.

Here are some quotes from participants:

– “There is a bifurcation in real estate values. Residential and industrial are still doing well while retail and, to a lesser extent, office is struggling. This will not change as there are some systemic changes taking place in the use of real estate.”

– “At a macro level, rent rolls are being suppressed because businesses are uncertain. With that being said, if your rent is questionable, that’s going to have an impact on your asset value and it will spread a lot of cold water on transactions. Within retail, the pandemic is driving the impact. The bricks and mortar contest against online will continue. Tenants are in trouble as the pandemic accelerates asset devaluation in retail. On the commercial side, I think that it is a temporary issue. I see the watermark on operating expenses showing up right now. There’s not a lot of movement in assets so there’s not a lot of transactions to show if this is a true downturn. Depending on a company’s capital structure, organizations might get aggressive on devaluing assets to give themselves a bit of head room for the next couple years, but that’s more aggressive tax planning. There’s devaluation because of rent, and the watermark on operating expenses. This is where technology comes in and delivers. In a building that is not run efficiently, technology will offer operating costs on a fixed basis causing NOI to go up.”

Lenders remain active, though there’s an increased level of scrutiny during the due diligence process, with many less willing to engage in higher risk investments.

Four per cent of Canadian respondents said the availability of debt capital will be much worse in a year.

There was a wider discrepancy with the U.S. results in this category. There was less optimism south of the border, where the respective sentiment numbers were two, 15, 38, 40 and five per cent.

Here are some quotes from respondents:

– “The dichotomy among the lending community is staggering. Rates change so quickly.”

– “We prefer Tier 1 and Tier 2 banks. Tier 1 banks are most cautious while Tier 2 banks are more willing to have a conversation. Alternative lenders see this as an opportunity.”

Two per cent of Canadian respondents thought the availability of equity capital will be much worse in a year.

Some quotes from participants:

– “(Equity capital is) not as bad as we thought it would be. Alignment between objectives with investors is very important. We would not go on a road show right now.”

– “We have had groups express interest. Investors are looking for a history of being conservative with debt. There are more conversations around risk mitigation versus track records.”

– “People are looking for anywhere where they can find a decent level of risk-adjusted return. There is a lot of capital moving into the space in private markets in general, whether it’s equity or debt.”

Ferguson Partners compiled the sentiment survey in conjunction with REALPAC.

The boutique talent management firm is involved with executive and board recruitment as well as compensation, leadership and management consulting.

Steve McLean Residential Shopping Centres National Dec. 22 2020
Steve McLean Business reporter
Steve is a veteran writer, reporter, editor and communications specialist whose work has appeared in a wide variety of print and online outlets. He’s the author of the book Hot Canadian Bands and has taught reporting to college students. He is based in Toronto.