Canderel is preparing to launch sales for its Bayview at The Village condominium, the latest step... 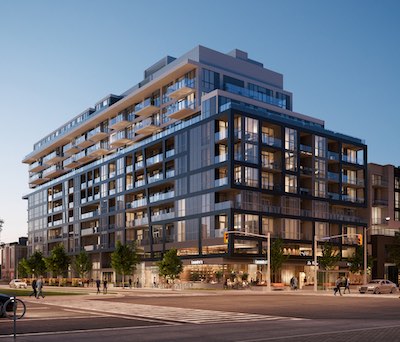 Bayview at The Village is the latest Toronto condo offering from Canderel. (Courtesy Canderel)

Canderel is preparing to launch sales for its Bayview at The Village condominium, the latest step in the Montreal-based company’s expansion of its multifamily presence in the Greater Toronto Area (GTA).

“Toronto continues to be a real magnet for global talent and I see that continuing for years,” Canderel chief executive officer Brett Miller told RENX. “Governments are facilitating the ability of immigrants to get landed immigrant status and, as that continues, Toronto will need housing.”

Bayview at The Village’s 10-storey Graziani + Corazza Architects-designed building will offer 239 condo units, ranging in size from studios to three-bedrooms and priced from the mid-$400,000s. It will also have two-storey townhomes with private gardens at prices starting at $1 million.

Miller said the mixed-use project is well-suited for young professionals who want to move into the neighbourhood and local residents who want to downsize but remain in the area.

“We tend to allow for a certain amount of flexibility through the sales process. We’ve found with these mid-rise projects, particularly for downsizing buyers, that they like to put some of these units together. We’re always open to that.”

Bayview at the Village’s selling points

II By IV Design is responsible for Bayview at the Village’s interior details, which Miller said are more like those found in higher-end downtown Toronto condos than those generally seen in more suburban areas.

Amenities will include: a media room; a communal workspace; a fitness centre; and a social lounge with a private dining area.

Located near Bayview Avenue and Sheppard Avenue East, it’s across the street from the stores and restaurants of Bayview Village shopping centre, which will undergo a major redevelopment to add residences and enhance its retail and experiential offerings.

Bayview at the Village itself includes a retail element that wraps around the northeast corner of the building.

An official on-sale date hasn’t been announced, but it is planned for this month or in April.

“In this particular neighbourhood, we feel there’s quite a bit of pent-up demand because there’s been very little supply of new condos in the area over the last several years,” said Miller, who assumed his current role two years ago after spending six years as CEO of JLL Canada.

Canderel is targeting Q4 2023 occupancy for Bayview at the Village.

“Everything’s in place to push the button and move forward as soon as we’re satisfied with our sales numbers,” said Miller.

“For the early buyers of that project, there was a considerable uptick in their equity values,” said Miller.

The 12-storey, 122-unit Quadrangle-designed 900 St. Clair West is part of the first phase of the KingSett Capital-partnered St. Clair Village.

Miller said it’s just under 90 per cent sold, with plenty of interest coming from local downsizers — some of whom combined units. Foundation work is progressing and work on the building envelope will start this summer, with occupancy scheduled for early summer in 2022.

Still to come from Canderel

Canderel has been working with City of Toronto officials on the design elements of a proposed mixed-use development of a 1.8-acre site at 545 Lake Shore Blvd. W., just inside the western end of Queens Quay.

“We’re a month or two away from being able to confirm exactly what the final project will look like,” said Miller.

Canderel has close to 1,000 units in its pipeline and is looking at half-a-dozen new sites across the GTA, according to Miller.

“Through COVID, it’s been slightly less competitive from a buyer perspective. Not that there’s been any discounted selling or bargains. Prices have been as strong as they’ve ever been.”

Canderel is also heavily involved in project and property management and is looking to expand in those areas.

“We’re still quite focused on the service side of our business,” said Miller. “People just think of Canderel as a developer, but we’re really a service provider to institutional capital.

“That part of our business is growing through acting as a development manager for owners of sites that want to transform them into condo or rental projects.”

The Waverley heads up busy 2021 for Fitzrovia Real Estate

Steve McLean Residential Development Toronto / GTA Mar. 12 2021
Steve McLean Business reporter
Steve is a veteran writer, reporter, editor and communications specialist whose work has appeared in a wide variety of print and online outlets. He’s the author of the book Hot Canadian Bands and has taught reporting to college students. He is based in Toronto.