The real estate needs of Canada’s emerging cannabis sector are still shaking down as producers, p... 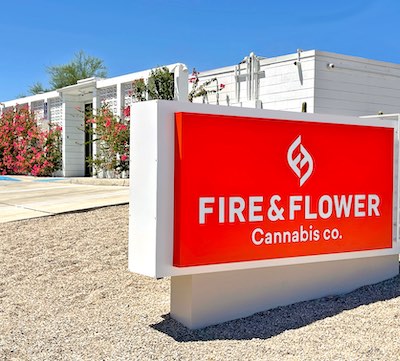 The real estate needs of Canada’s emerging cannabis sector are still shaking down as producers, processors and retailers mature.

While the retail sector grows rapidly and offers opportunity for retail property owners, the market for massive greenhouse production facilities has slumped. Processors of cannabis 2.0 products such as beverages and gummies are having to compete in the tight and increasingly costly industrial property sector.

The Canadian cannabis market is also developing unevenly as each province opens up its regulatory regime differently.

Nadia Vattovaz, chief operating officer for retailer Fire and Flower, says Alberta is moving toward maturity in the market more quickly than other provinces because it has a head start in opening up.

In Ontario, the retail sector took its big leap forward only in the past year and a half, jumping from about 400 stores to more than 800 during the period overlapping the COVID-19 pandemic. Now those stores must establish themselves, says Vattovaz.

“This has implications in terms of competitiveness similar to what we saw in Alberta a year ago. It will definitely be a survival game.”

Vattovaz says one evolution within the industry is that retailers are finding more Canadian property owners who are receptive to housing cannabis stores. They recognize cannabis retailers are traffic drivers to malls and adjacent tenants.

“It’s so important for a cannabis retailer to maintain their license and that means respecting the rules and regulations set out by each province and making sure that they’re responsible,” she said. “I don’t know any players who aren’t quite careful how they operate.”

The success of cannabis during the pandemic showed landlords the retailers are resilient, says Vattovaz.

Fire and Flower has about 86 stores across Canada, says Vattovaz. The company prefers malls and downtown locations, although it does have some standalone outlets.

The company also has an agreement with Couche-Tard, owner of the Circle K convenience stores, for adjacency locations beside Circle K locations in the Alberta cities of Grande Prairie and Calgary.

Vattovaz says her company generally looks for a footprint of between 1,000 and 1,800 square feet. The firm chooses new locations based on the data it has on its customer base.

Fire and Flower stores make an average of $939 in sales per square foot, says Vattovaz.

Cannabis producers and processors are challenged by different market and regulatory forces than the retail side of the emerging industry.

Colliers International senior associate Bianca Gilbert, who is based in Vancouver, has an industry specialization working with cannabis operators.

She says many cannabis firms want to set up operations in British Columbia because it is a well-known legacy market, but they soon find zoning and regulations daunting.

Health Canada makes the rules about clean rooms and security in the facilities, but leaves zoning up to municipalities, she says. Some jurisdictions deem cannabis production industrial and some call it agricultural.

“We’ve seen some operators move over to Alberta so they can get the right zoning for their facility, and get the ability to build and be operational,” says Gilbert, an industrial sales and leasing associate.

Early giant warehouse developments from 2015 to 2018 were based on the premise the player producing the most flower would monopolize the industry, she noted.

It soon became apparent consumers wanted to consume cannabis in other forms and producers were stuck with too much plant product and property under glass.

Now the big producers are selling some of their mammoth greenhouses. Canopy Growth, for instance, sold two B.C. greenhouses in December and January for $40.6 million, sharply lower than the original investment, according to media reports.

Some greenhouses have been sold to agricultural buyers who build into their offers the cost of removing improvements made specifically to meet cannabis growing requirements, says Gilbert. The cannabis industry faces significant obligations which are not necessary to produce other agricultural products.

“I think a significant part of the shakeout has happened, but there’s going to a bit more to come,” says Gilbert.

Craft cannabis producers, who specialize in smaller production, are restricted by Health Canada to a maximum of 2,100 square feet of canopy area to grow their plants, says Gilbert, so they aren’t in the market for mega-greenhouse space.

She says they are seeking industrial property, as are the cannabis 2.0 and 3.0 firms processing CBD oil, creams, gummies and other consumables.

In B.C., that industrial space is tough to find, says Gilbert. Vancouver is now at less than one per cent vacancy for industrial property. Being in a new industry puts cannabis businesses at a disadvantage in competing with more established bidders for what space is available.

Firms that can find the space face sharply higher leasing costs, and not only in Vancouver. Rents are continuing to rise in most Canadian markets as e-commerce, last-mile distribution, companies which are on-shoring storage and/or production, and other users clamour for more space.

Despite the challenges of matching cannabis businesses with properties, Gilbert says she enjoys her area of specialization.

“There’s not very many opportunities where there’s a new industry coming into the world and working with that is exciting,” she says.

Don Wilcox Commercial Transactions Ontario Sep. 3 2021
K
Kathy Kerr Business reporter
Kathy Kerr is an Alberta journalist with four decades of experience as a writer and editor. She covered general news and provincial politics as a reporter for the Calgary Herald in the 1980s and worked at the Edmonton Journal from the 1990s to 2016 in several editor roles, including business editor, city editor, features editor, editorial page editor and finally deputy editor of the Postmedia Edmonton newsroom. Kathy is now a freelance writer and commentator.