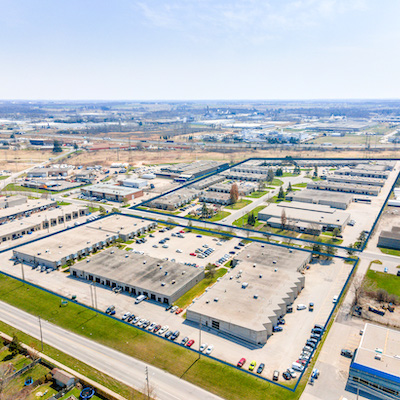 The Newbold industrial park in London, Ont., has been acquired by Epic Investments Services on behalf of an institutional client. (Courtesy Epic)

Epic Investment Services has acquired a 17-building small- and mid-bay industrial portfolio in London, Ont. on behalf of an unnamed institutional client.

The portfolio comprises 365,423 square feet of leasable space on 22.8 acres and is 98 per cent occupied. Epic has not identified the investor nor the vendor, but RENX has confirmed the properties were sold by Skyline Commercial REIT.

“It’s a portfolio of small and mid-bay industrial, very much a mix of local tenants, as well as some national (firms) who have satellite-type operations,” said Aaron Moore, Epic’s vice president, investments, during an interview with RENX. He calls the properties a “great portfolio of assets, all geographically located together.”

About the London industrial portfolio

Constructed mainly during the 1970s, the properties are characterized by mid-height ceilings, Moore said, with a mix of grade and dock loading depending on the facility and tenant.

“It’s very much one of these opportunities where, for a lot of institutional investors it’s tough to own that kind of real estate unless they have a very big management arm,” Moore explained. “The advantage for us is that we have quite a substantial management program, so we can be quite active, have boots on the ground, and senior people on the ground.”

The acquisitions came via competitive bidding, so Moore said a lot of research and strategic thinking went into the process. There are few bargains in the industrial sector these days, with demand continuing to escalate and vacancy rates compressing in virtually every Canadian market.

Skyline had acquired the portfolio in 2013 for about $53 per square foot, it reported at the time.

The REIT saw a value-add opportunity in leasing up vacant space in the assets – a situation in very stark contrast to today’s market conditions when vacant space is almost impossible to find.

At the time, it was Skyline’s entry into the London industrial market – although Skyline Group of Companies was already familiar with the city due to several multifamily holdings within Skyline Apartment REIT.

“This is very much a thematic purchase,” Moore explained. “There are certain tailwinds that a lot of players in the market see. There’s certainly a significant decrease in availability across all the major markets and frankly into a lot of secondary markets as well.”

He said CBRE’s latest figures show industrial vacancy in London at less than one per cent. It’s also strategically located to serve both the local and regional markets, and perhaps even to catch some spillover from the ever-expanding Greater Toronto Area market.

“We like the market. We think it’s a gateway market, a great spot, one of the largest in southwestern Ontario outside of the GTA,” Moore said. “It’s about 40 million square feet (of industrial space). We like the size, that it has some scale notwithstanding the fact that it’s outside the GTA.

“Rental rates in those markets have been very low and I would say they were not as quick as the GTA to move upwards.

“Getting back to that thesis, as the GTA rates get so high we are starting to see pressure now on some of the other markets. So really, this is capturing some of that value creation opportunity through moving rents, although on a different scale from the GTA. But along the same trend line.”

“This is a focus toward a specific client with an industrial strategy that we are executing on, what I would characterize as a mid-band acquisition looking to generate a bit more alpha than your typical industrial 500,000-square-foot blocks.”