CAPREIT (CAR.UN-T) has acquired the remaining 50 per cent interest in a portfolio of 787 apartmen... 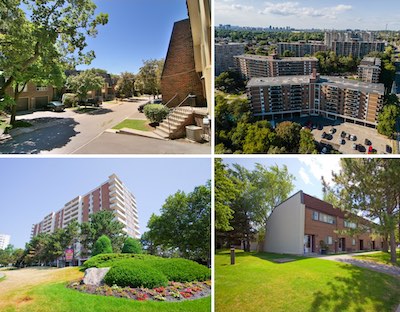 CAPREIT has acquired the remaining 50 per cent interest in a portfolio of 787 GTA apartments and townhouses. (Courtesy CAPREIT)

CAPREIT (CAR.UN-T) has acquired the remaining 50 per cent interest in a portfolio of 787 apartments and townhouses in the Greater Toronto Area which it previously held as part of a joint venture.

The trust paid $159 million to become the sole owner of the properties. CAPREIT had acquired its initial 50 per cent interest on July 31, 2008, the firm reported in the announcement on Tuesday night.

“We are pleased to be acquiring 100 per cent ownership of these accretive properties. These are strong value acquisitions that meet our additional goal of simplifying the balance sheet for improved growth,” said CAPREIT president and CEO Mark Kennedy in the announcement.

The portfolio consists of:

– a 139-suite apartment building and a 93-unit luxury townhouse complex in North York;

– a 111-unit townhouse development in Etobicoke;

– and a 74-suite luxury apartment property on the corner of Chaplin Crescent and Eglinton Avenue West in midtown Toronto.

The 583 apartment suites include bachelor, one-, two- and three-bedroom units, with the 204 townhome portfolio including two-, three- and four-bedroom suites. Occupancy in the portfolio was approximately 98.5 per cent at closing.

CAPREIT has been the property manager for the portfolio since acquiring its initial 50 per cent interest. The trust has also made significant upgrades to the properties.

As part of its ongoing value-add strategy to increase asset values and revenue-producing potential, CAPREIT has invested $48.2 million in the portfolio since the acquisition of its original 50 per cent interest.

Improvements include new heating boilers, water fixture retrofits, in-suite and common area LED lighting, and other energy-efficient investments. In addition to significant cost savings and enhanced operating efficiency at the properties, the investments resulted in an 11.9 per cent reduction in energy consumption and a 12 per cent reduction in GHG emissions since 2010.

“The portfolio has significantly increased in value since our original investment, in part the result of our proactive and successful property management programs, and capital investments that have increased operating efficiency and reduced costs,” Kenney said in the statement. “We are also pleased that our investments and our focus on ESG programs have contributed to meeting our goal of reducing our environmental footprint.”

CAPREIT financed a portion of the purchase by assuming the other half of the existing mortgages, which equate to $37.2 million at an average interest rate of 3.16 per cent and an average remaining term of 7.8 years. The balance was paid in cash.

CAPREIT and its recent acquisitions

The trust has been steadily growing its portfolio through a series of significant acquisitions, most recently in June and July with the acquisitions of 1,225 residential units through several transactions.

During that period, CAPREIT spent over $235 million to acquire apartment portfolios comprising 13 buildings in Victoria and London, Ont., as well as two manufactured homes communities (MHCs) with 342 sites just outside Windsor.

CAPREIT is Canada’s largest publicly-traded provider of rental housing. The trust owns or has interests in approximately 69,600 residential apartment suites, townhomes and manufactured housing community sites across Canada, in the Netherlands and Ireland.