The Concert CREC Commercial Fund LP has acquired one of Western Canada’s most significant distrib... 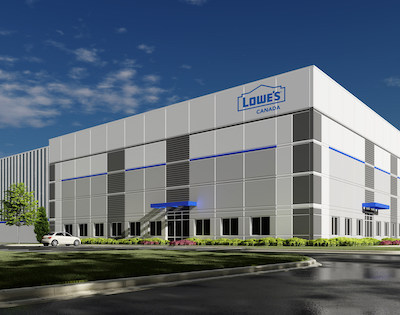 “We’re very excited to have secured a superb facility in an exceptional and increasingly important location,” said Brian McCauley, Concert’s president and chief executive officer, in the announcement Tuesday. “This is a coveted and key distribution hub for national and North American companies and the purchase captures a tenant in an active home improvement sector.”

It was developed by Calgary-based Highfield Investment Group – which is spearheading activity at the High Plains property – and represents about a $120-million investment. Construction at the site commenced in June 2020 and it was completed during the summer.

“With this acquisition, we are continuing our focus on building our portfolio of commercial properties and growing in attractive regions in Western Canada,” said Andrew Tong, managing director of the CREC Commercial Fund LP, in the announcement.

“Having a prominent organization like Lowe’s Canada choose this location signals their trust in the current and future importance of the Calgary area as a key logistics hub.”

The Calgary acquisition caps a year of growth for the fund, which to date has included buying the L’Oreal Distribution Centre in Montreal and two office buildings near Toronto Pearson International Airport.

Concert Realty Services Ltd. manages the fund’s portfolio, which is supported by multiple Canadian pension funds and institutional investors. It has an asset value in excess of $2.3 billion and over 11.5 million square feet of leasable area.

The High Plains Industrial Park has attracted a number of major firms since Highfield made its first land purchase at the site in 2006 and development has taken off in recent years as industrial demand has risen.

Highfield recently bought about 269 acres of adjacent land to add to the 1,100 acres it already owns at the site.

Founded in 1989, Concert develops, acquires and manages Canadian over $7 billion in assets, backed and owned by over 200,000 Canadians represented by union and management pension plans.