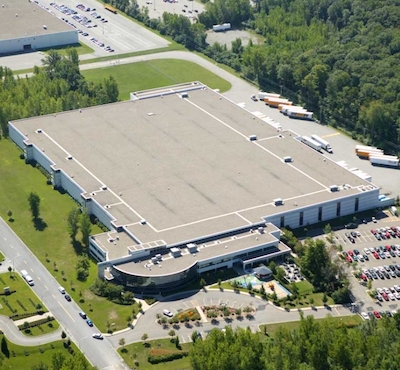 The L’Oreal office and distribution centre at 3500 Douglas-B.-Floreani St. in the Montreal borough of Saint-Laurent has been acquired by Concert’s CREC Commercial Fund LP. (Courtesy CBRE)

“The property is in an exceptional location, the building itself is exceptional and you’ve got an incredible credit-worthy tenant,” CREC Commercial Fund LP managing director Andrew Tong told RENX.

The property has below-market lease rates and Tong said Concert sees a built-in upside in the long run.

“The pricing, in our view, is in line with the current market for assets of this high institutional-grade quality.”

The acquisition is Concert’s first in Quebec, though Tong said the Vancouver-based developer has looked at Montreal as a target market for years.

“Backed by Canadian pension funds and institutional investors, we wanted to take a cautious approach before entering into a new province,” said Tong. “This is our first investment in Quebec and we wanted to make sure we had a really good base and then could grow from there.

“That’s typically our style. We like to go in and take a position with something with a little bit of scale and then start to grow.”

Concert is actively pursuing other industrial and office opportunities in Montreal, according to Tong.

The 1.2-million-square-foot property at 3500 Douglas-B.-Floreani St. has a 424,422-square-foot distribution centre and office. It includes 95,120 square feet of expansion space under construction by Vista which is expected to be completed in March.

The facility was built in 2001 and features: clear ceiling heights ranging from 32 to 50 feet; a 10 per cent office-to-warehouse ratio; 38 truck-level doors; and a new roof. There’s also a park behind the building.

The property is located in the heart of Canada’s second-largest industrial market, within the Saint-Laurent Industrial Park, and has easy access to highways 13, 15, 20, 40 and 520.

Two nearby light rapid transit stations are also under development.

The property is 100 per cent leased for 10 years to L’Oréal Canada, a subsidiary of a leading worldwide cosmetic group operating in 150 countries that had 2019 revenues in excess of $45 billion.

L’Oréal Canada had sales of $1.2 billion in 2019 and the Montreal facility serves as its primary Canadian distribution centre.

The property includes an employee recreation area and a daycare centre used by L’Oréal employees and members of the local community.

CBRE brokered the deal for Concert’s latest property, which went on the market in October.

There were so many bids that a second round was held.

The price of approximately $215 per square foot exceeded expectations, according to Speirs.

Vista is one of Montreal’s largest property holders and manages more than eight million square feet of commercial and industrial space.

Along with Groupe Quint, it recently sold a 525,922-square-foot class-A logistics property with expansion potential in the Montreal suburb of Vaudreuil-Dorion to Dream Industrial REIT for $114 million.

Speirs said Vista was looking to recycle capital and took advantage of the strength of the market in selling the two properties.

Tong said Concert looked at the Vaudreuil-Dorion opportunity and saw an excellent property.

However, it preferred the Saint-Laurent location and thought it was a better fit due to its proximity to the airport and downtown Montreal.

Concert was established in 1989 and has more than $6 billion in assets, backed and owned by more than 200,000 Canadians represented by union and management pension plans.

Concert’s fully subscribed CREC Commercial Fund LP was formed in October 2016 and is valued at more than $2 billion. It includes almost 10 million square feet of industrial and office properties.

The open-ended, limited partnership fund invests in and actively manages industrial, office and commercial real estate in Canada. The portfolio is managed by Concert and serves as its exclusive commercial platform.

It entered the Ottawa market in September 2019 when the CREC Commercial Fund LP purchased a 90 per cent interest in a one-million-square-foot distribution facility.

The newly constructed facility, built by Montreal-based Broccolini, is fully leased to Amazon on a long-term basis as a fulfillment centre.

“After that transaction was announced, other industrial positions have been growing in Ottawa since e-commerce has intensified in all of the major regions across Canada,” said Tong. “We’re delighted to have a significant position with Amazon in Ottawa.”

Concert has more than 500 commercial tenants and 64 per cent of its portfolio is industrial, according to Tong. It aims to grow with tenants, many of whom are asking for more space.

“We want to have an array of real estate that can accommodate them across Canada and be a provider for them,” said Tong.

The L’Oréal property has a small additional intensification opportunity that won’t be immediately pursued and it wasn’t factored into Concert’s underwriting for the acquisition.

However, Tong said many of the company’s 70 other properties in British Columbia, Alberta and Ontario include intensification plans that will be launched when the time is right.

Danny Kucharsky Residential Market Trends Greater Montreal Feb. 23 2021
Steve McLean Business reporter
Steve is a veteran writer, reporter, editor and communications specialist whose work has appeared in a wide variety of print and online outlets. He’s the author of the book Hot Canadian Bands and has taught reporting to college students. He is based in Toronto.