Despite the COVID-19 pandemic which has gutted Canada’s hospitality sector, Silver Hotels Calgary... 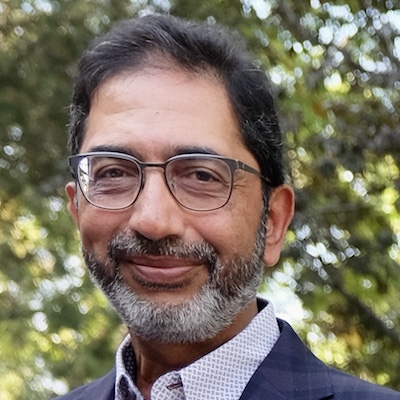 Despite the COVID-19 pandemic which has gutted Canada’s hospitality sector, Silver Hotels Calgary Ltd. has forged ahead with the conversion of an under-utilized downtown Calgary office space into the city’s newest boutique hotel.

Asheet Ruparell, managing director of the family-run company, said development of The Westley Hotel is a sign of optimism in Calgary’s long-term future.

“Calgary already had some economic issues before we did this project and we have other hotels in Calgary,” Ruparell told RENX in an interview.

“We saw numbers slowly trailing down, but we also saw an opportunity. There has not been, relatively speaking, very much supply added in the downtown market. Most of the supply was added up by the airport and other areas.

“We knew there was a market downtown for the right product. A lot of the products were tired, old and the product that we are bringing to the market is unique.

“It’s based loosely on the boutique hotel with a strong food and beverage focus on the main floor that creates a sense of community where locals can come and hang out.  . . . It creates a very vibrant space that the hotel traveller would go into and not be like a typical hotel.”

Thus, he believes there is a niche market for The Westley.

“We’ve seen that succeed in other markets and because the competition really wasn’t there, we felt quite strongly that this product would do very well.”

Hotel market to rebound from COVID

Ruparell said the hotel market will be in a reconstructive phase after the COVID-19 pandemic recedes. He expects it to take months for the initial demand to start and probably a couple of years for occupancy to get back to stable, normal levels.

“I think Calgary will do relatively well,” he said. “We feel Calgary is a very resilient city. It still has good prospects.

“We’re not tying ourselves just to the oil and gas industry creating that success. We think that there’s enough demand that will be in Calgary to fill the right properties. There will be casualties. We just have to be very strong and competitive to make sure we take our portion of the market that is there.

“It’s going to take time. You have to be able to invest in it and look long-term and that’s how we looked to this property when we got into it.

“Obviously the whole COVID pandemic has put a big wrench in things, but we see past that. We see past how the city is going to grow back over the next few years not just three months.”

The Westley an office conversion

The hotel is in the Eau Claire neighbourhood on 4th Avenue between 5th and 6th Street S.W., in a building which housed offices for about 40 years. Most recently it was the head office for Birchcliff Energy, which moved to another location.

The five-storey building with underground parking had 68,000 square feet of office space.

Ruparell said it was vacant for just over a year prior to Silver Hotel Group purchasing it in 2018 from Artis REIT for between $9 million and $10 million. Silver had been looking specifically for a property which could be converted.

“We bought it with the intention to turn it into a hotel. We’ve been in Calgary since the early 1970s and I’ve had hotels in the past and other real estate in town. We’ve had hotels downtown. . . . We’re familiar with the market. We understand it.”

Having successfully developed and launched urban boutique hotels in Toronto, Ruparell said he believes in the format and needed the right location to make the financials work.

“The choice was to buy land and build new, but frankly given the price of land and the development costs to make our economics work we would have had to build quite a large hotel, especially given that we were fairly high-end and we wanted to be a boutique hotel,”” he explained.

“I couldn’t really amortize a brand new building for 100 to 200 rooms into a downtown piece of land, especially with the market the way it was. Even with the downturn that we had . . . land prices and development costs, it would have been quite cost-prohibitive.”

The Westley to soft launch June 29

The idea to find a smaller building in a depressed office market made better economic sense. The downtown office market in Calgary has a vacancy rate in the neighbourhood of 30 per cent overall, but higher at the west end of the central business district.

“I looked at a number of buildings downtown, trying to find one that would be well-suited for a conversion into a hotel. Every building has a nuance; the floor plate, where the elevators are, mechanical systems, how close it is to the centre of downtown . . .

“There’s a lot of nuances. When we saw this building, we very quickly realized it had the most potential and very good bones.” 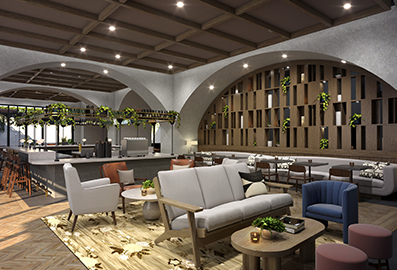 The Westley Hotel has an open transition from the restaurant to the hotel lobby, two functional meeting spaces, a sunlit fitness facility and an outdoor patio. (Courtesy The Hilton)

The Westley Hotel, which will have a soft launch June 29 with grand opening July 6, has 104 rooms and is part of the Hilton’s Tapestry Collection Hotels. The pet-friendly hotel has an open transition from the restaurant to the hotel lobby, two functional meeting spaces, a sunlit fitness facility and an outdoor patio.

“The name is really derived from our desire to create a bit of character for the hotel – to have something very distinct. It’s a distinct hotel . . . one of a kind. And we wanted to make sure that we came up with a name that somehow paid homage to where we are here in the West,” said Ruparell.

“The Westley really resonated well with all of our stakeholder groups and we felt it gave us a particular nuance and character we can build upon as we develop the brand. It’s not a particular link to anything in the past. It’s something new.”

Ruparell did not reveal the total conversion cost.

However, he said the conversion was not straightforward.

“We took a chance”

“We took a chance,” Ruparell admitted. “We bought the building and then we demolished the entire building inside. All we left was the central core, the elevators which we modernized.

“The entire HVAC system, the electrical system, all interiors were basically brought right down to a core. By doing that, we were then able to design the space as opposed to having to design the building and not know what the real issues are.

“Once we knew we had the building envelope under control we had everything removed, it became easier to design it from that approach because now we could design the rooms, the hotel. . . . By planning ahead and being able to do the demolition and really knowing what we were dealing with, I think we took a lot of the complexity out of it.”

Interior demolition work began in late 2018. Design work was finished in the spring of 2019. Construction began in the summer of 2019.

Silver Hotels Calgary Ltd., has about 20 hotels across Canada. In Calgary it has four hotels, the other three under the Holiday Inn Express banner.

Don Wilcox Commercial Market Trends National Jun. 17 2021
M
Mario Toneguzzi Business reporter
Mario Toneguzzi, based in Calgary has 37 years of experience as a daily newspaper writer, columnist and editor. He worked for 35 years at the Calgary Herald covering sports, crime, politics, health, city and breaking news, and business. For 12 years as a business writer, his main beats were commercial and residential real estate, retail, small business and general economic news. He nows works on his own as a freelance writer and consultant in communications and media relations/training.