Transport DSquare has signed what’s expected to be the biggest industrial lease of the year in Qu... 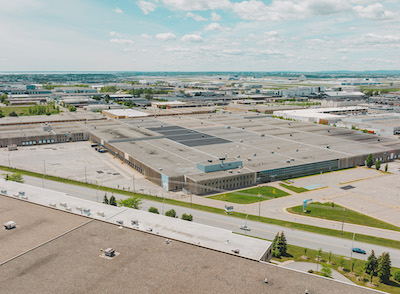 Transport DSquare has signed what’s expected to be the biggest industrial lease of the year in Quebec by securing all of an 822,000-square-foot building at 4505 Hickmore St. in the Montreal suburb of Saint-Laurent.

The third-party logistics company took possession of the property last week. It had been vacated by the Mattel-owned Mega Bloks construction toy operation earlier this summer.

“Their plan is to consolidate a few of their warehouses and take on some new contracts and centralize their hub,” said Ryan Cymet, executive vice-president of CBRE, which represented building owner Groupe CIL in the deal.

“The building is in good working order and maybe needs a little refresh, but that’s about it.”

Colliers represented DSquare in the transaction, which Cymet told RENX resulted in the logistics company signing a seven-year lease at the market rate.

“A lot of different groups were interested in the building, including manufacturers, logistics companies, wholesalers and distributors,” Cymet told RENX. “They came in all different shapes and sizes.

Having one tenant lease the entire space appealed to Groupe CIL, a real estate management company that has six properties and more than 2.3 million square feet of industrial space under management in Greater Montreal.

“The Montreal market has continued to perform at the highest rental growth nationally due to a lack of supply as well as strong market fundamentals,” said Cymet.

“Montreal is unique in the sense that we have a very strong manufacturing base as well as a lot of distributors and wholesalers and locally owned businesses that have organic growth.

“We’re not getting the boom from any specific industry, it’s collective growth. Montreal, being an island, has significant land constraints and doesn’t have readily available industrial sites to develop.”

That’s continuing to contribute to the growth in rents.

Cymet said Montreal’s industrial vacancy rate was 1.3 per cent in the second quarter and that 4505 Hickmore represents 25 basis points of vacancy that will be taken off the market.

“Montreal will remain one of the tightest industrial markets in North America,” said Cymet, who added that other large industrial lease deals are close to being finalized.

Danny Kucharsky Commercial Industrial Calgary Aug. 8 2022
Steve McLean Business reporter
Steve is a veteran writer, reporter, editor and communications specialist whose work has appeared in a wide variety of print and online outlets. He’s the author of the book Hot Canadian Bands and has taught reporting to college students. He is based in Toronto.