The Montreal area could soon run out of industrial land for development unless governments make i... 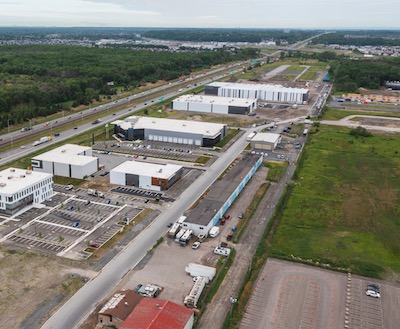 The Montreal area could soon run out of industrial land for development unless governments make it easier to facilitate zoning changes, says Dario Montoni, president of Montoni Group.

“There’s a lot of land available, but a lot of the land is zoned agricultural. There is a scarcity of land and I think we’re going to run out of industrial land probably in the next five years.”

Montoni says governments will need to move to rezone portions of the Montreal area or industrial growth will come to a halt. When it comes to industrial-zoned land, Montreal does not have the “bandwidth” of a Toronto which keeps growing, he says.

In the short term, however, “everybody’s building industrial buildings today” and several developments will be coming onto the market in the next few years.

Among them is the third phase of Montoni Group’s CentrOparc industrial and commercial development at the former airport in Mascouche, about 35 kilometres from Montreal.

CentrOparc’s first and second phases total more than 1.6 million square feet and include tenants such as Desjardins and St-Hubert BBQ and newest arrival Bicycles Quilicot.

Groundbreaking took place last month for  Bicycles Quilicot’s 45,000-square-foot headquarters, which is scheduled to open next spring after an investment of more than $15 million.

Five additional industrial buildings are being built in the third phase, totalling 1.3 million square feet at a cost of about $175 million, bringing the overall investment for CentrOparc to $300 million. Montoni Group is maintaining ownership of about 60 per cent of the site.

Montoni says one of the Phase 3 buildings, with about 300,000 square feet, has been leased to an unnamed tenant.  Phase 3 will likely be completed in two years.

“Phases 1 and 2 were supposed to be done in five years and it took two-and-a-half years, including COVID, so Phase 3 should go even faster.”

The company is also finalizing plans for about six million square feet of industrial development land in the Bromont Science Park, about 80 kilometres east of Montreal.

Montoni Group acquired the land last year for $18 million and will be making announcements this fall about the site, he says.

Montoni has few doubts there will be takers for CentrOparc, Bromont and other industrial developments.

“I’ve been in the industrial market for 27 years and I’ve never seen the (rental) rates rise that high so quickly and I’ve never seen vacancy rates as low. We’re putting up spec buildings today and when you put the shovel in the ground, the building’s already leased.”

Elsewhere, the 330,000-plus square feet of office space at the $450 million-plus Espace Montmorency, dubbed Laval’s biggest mixed-use real estate project, is about 60 per cent leased.

Tenants include Deloitte, Collège Montmorency, Scotiabank, as well as both Montoni and Groupe Sélection. Negotiations are underway with three or four other large tenants and “we’re looking to be about 85 per cent leased by the end of the year when the office portion opens up,” Montoni said.

Platinum LEED is being targeted for the office tower, which will have a co-working space on the eighth floor and terraces for tenants.

Montoni says tenants are also being attracted to the project’s link to the Montmorency Metro station (terminus of the subway’s Orange line) and its proximity to Place Bell, home of the Laval Rocket farm team of the Montreal Canadiens.

Montoni notes many of the tenants renting at Espace Montmorency have offices downtown and are looking to build satellite offices linked by Metro and close to where many staffers live.

Tenants have started to move in to the 700-plus residential rental units at the site, which Montoni expects to be about 50 per cent leased by September. Developed by Groupe Sélection, the residential component has three concepts:

– Hoop, units designed for various types of families; and

The retail component is about 90 per cent leased to about 20 stores and restaurants. “Even with the challenges of COVID over the past couple of years, it’s gone really well.”

Espace Montmorency also includes a 188-room Courtyard by Marriott hotel which will begin operating next winter.

In January, Vancouver-based Nicola Wealth Real Estate partnered with Montoni to acquire its first Montreal property, a 139,302-square-foot industrial building at 3499 Douglas B Floreani St. in the borough of Saint-Laurent. The transaction was sourced by Montoni.

The property was acquired on a sale/leaseback from the seller. It’s fully leased to Grass Valley, a television and broadcasting equipment manufacturing company, which has a five-year lease.

“They were looking to come into the Montreal market and we had this nice opportunity,” Montoni says of the deal with Nicola. “It’s a huge tract of land, (so) we have a large expansion possibility on the property.

“We’re looking for a lot of those sale leasebacks or looking at properties that have a lot of excess land so we can actually redevelop or expand the building and reposition the properties.”

In 2019, Montoni acquired the Molson Brewery site in the eastern sector of downtown Montreal, along with Groupe Sélection and the Fonds immobilier de solidarité FTQ. The partners plan to construct a mixed-use development comprising over six million square feet of space.

Montoni says demolition has started on part of the old brewery and an announcement is likely in October to make public more detailed plans for the site.

The company will announce additional large projects, mostly on the South Shore, in the fall, Montoni says.

Mario Toneguzzi Residential Market Trends National Jul. 14 2022
D
Danny Kucharsky Business reporter
Danny is a multiple award-winning journalist based in Montreal, who has written for about 75 magazines and newspapers in Canada and the U.S. His credits include The Globe and Mail, Montreal Gazette, Maclean's, Chicago Tribune and a wide variety of business, specialized trade and medical magazines. Danny was also the Montreal correspondent for Marketing Magazine for several years.