Edenshaw Developments has partnered with Windsor Private Capital to acquire a prime transit-orien... 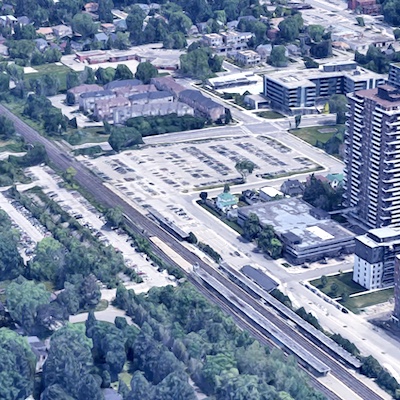 Edenshaw Developments has partnered with Windsor Private Capital to acquire a prime transit-oriented development site in what might be called Edenshaw’s own backyard . . . at the Metrolinx Port Credit Mobility Hub in Mississauga.

The 1.48-acre piece of land is currently a parking lot on the west side of Hurontario Street, adjacent to the transit station, at 30 Queen St. E. The site has already been designated by the City of Mississauga for high-density infill development because of its proximity to transit.

“This is my home for 20 years and it’s nice to be a part of the growth in a small community,” said David McComb, president and CEO of Edenshaw, in an interview with RENX. “For us, it’s a personal triumph. A majority of our staff are Mississauga and Port Credit residents. Our office is a two-minute walk from this location. We can virtually live and work within the same block.”

Edenshaw also has several other developments on the go in the area, including more than 340 sold-out condo units at Westport, which is right across the road from the transit hub.

“We have over 2,700 units in development and the majority of them are within a three-minute walk of our office,” McComb said.

The transit hub includes the new Metrolinx Hurontario Light Rail Transit (HULRT) station, which acts as the southern terminus for the line. Currently under construction and slated for completion in about three years, the north-south LRT will connect riders to Brampton Gateway.

It also includes the existing Port Credit GO Mobility Hub, with its connections to the Lakeshore West and Milton GO Transit service lines. Union Station in downtown Toronto is a 25-minute ride via the GO Train.

The Metrolinx site has a unique feature . . . it is being designed as the only underground station on the HULRT. It will also feature a pedestrian-friendly, civic square component which will complement the future Edenshaw development.

To accommodate both projects, a one-acre portion of the site was retained by Metrolinx for construction of the HULRT station itself.

“We are excited to be a part of this landmark project in Port Credit and to be working again with Edenshaw, one of our trusted and experienced development partners,” said Rocco Marcello, chairman and CEO of Windsor Private Capital, in the announcement.

“This project will be a tremendous addition to the community of Port Credit and the City of Mississauga.”

The acquisition, which is slated to close in Q4, is the end of a long process for Edenshaw.

“Six years ago, Edenshaw was one of three consortiums which were pre-approved for bidding on the Port Credit Go Train station and its redevelopment,” McComb explained. That was proposed as a P3 type of project, but after five years of talks and negotiations, the plan was shelved.

Edenshaw is now working on its development plans. Current zoning allows for two 22-storey towers. McComb said there is no parking requirement other than what will be utilized by building residents and other tenants.

“The focus for us is multifamily residential, high-density multifamily mixed-use,” McComb said. “We’ll be looking at what mixed uses best serve such a major terminus for the City of Mississauga.

“We’re really focusing on what is going to keep people activated and make this a vibrant part of the Port Credit village.”

McComb said financial details have not been released because the sale has yet to close.

He hopes to have a plan filed later this year, then spend another year or so working through the entitlement and approvals process.

The site will be Edenshaw’s fourth residential condo development in Port Credit and its fifth in Mississauga.

Edenshaw recently launched Alba Condos in Mississauga, the company’s first geothermal building, which is located a few blocks away along the LRT’s path.

The Westport condos are being developed across from the transit site and Edenshaw’s Tanu condos a few blocks away are nearing completion and slated to begin occupancy in Q4.