Gordon Yeh was a 26-year-old engineering graduate who’d decided to enter the world of residential... 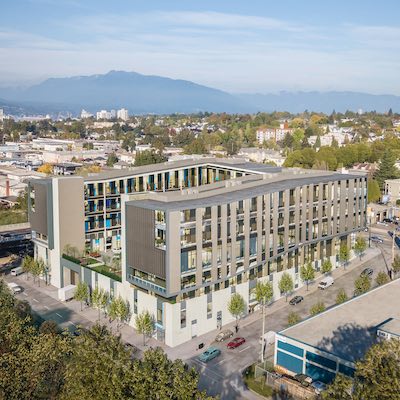 Frameworks will be a stacked industrial project in Vancouver’s False Creek Flats. Developer Alliance Partners is including an exterior truck ramp to allow loading access to the second level. (Courtesy Alliance Partners)

In the summer of 2016, he’d just finished three years in construction management at Beedie Development Group and he had excitedly lined up a few projects of his own. Then the announcement of a 15 per cent tax on foreign buyers of B.C. residential properties changed everything.

“Basically overnight everything I had planned for upon leaving Beedie fell apart,” said Yeh. “I had just quit my job thinking I had something to come out to, and then I was jobless, with no prospects.

“It was a scary time. I started over basically, from negative 10.”

Yeh had studied to be a geotechnical engineer but a couple of summer internships for Polygon and Beedie made him realize he’d rather be a developer. He had a partner whose family invested in the new development company, Alliance Partners.

No longer able to make a residential business model work, they quickly pivoted from a focus on residential to industrial. (Yeh has since parted ways with the partner and has acquired additional investors).

“When I was at Beedie, my focus was on the construction side but the asset class was always industrial, and I had seen that. Starting from scratch and not having capital and not having the resources of a company like Beedie, it was really hard to compete. It was David vs. Goliath, because all the industrial players around are relatively big.

“So we had the idea that if we can’t compete with them in terms of doing a standard project, then we have to exercise some creativity and spark some new ideas. So what we ended up looking at was this concept of stacked industrial.”

The five-storey, 173,000-square-foot Frameworks strata building will have one very distinctive feature – a ramp to its second level where trucks will load and unload, a significant extra expense and a key design aspect of the building.

A sign company called Rapid Signs was one of the first buyers when Alliance launched sales for the north side of the building in September, with most units sold. The sign company purchased 6,000 square feet of space, with plans to rent some units out until it grows into them.

The 1.5-acre site is expected to allow enough industrial and office space for 85 small to mid-sized businesses, mostly manufacturing types needing to be near the urban core, or the Port of Vancouver. Yeh said buyers are a mix of end users and investors with plans to rent out units.

His timing was key. Stacked industrial is nothing new elsewhere in the world, but in the Lower Mainland going vertical is still a novelty for the industrial sector.

Frameworks is one of three stacked industrial developments underway in the False Creek Flats area, a sprawling historic industrial core that borders the port and the downtown. 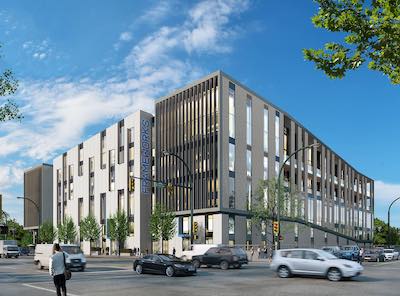 His acquisition of the southwest corner property at a major intersection, on a major truck route, aligns with the City of Vancouver’s all-encompassing new Broadway Plan, which will transform a central east-west arterial of the city and the neighbourhoods around it.

Yeh hasn’t completely abandoned his residential real estate goals. He has two purpose-built rental projects underway on Vancouver’s East Side, both in the rezoning process. He will hold those properties as long-term assets.

“A lot of developers, they like to say they called it, that they saw this happening. I’m the first one to say it was a lot of dumb luck and naivete,” he said, partially in jest, about Frameworks.

“In all (seriousness), we obviously did a lot of due diligence, because we are still a young company, so it’s very important for us to always get it right and do a bit more than everybody else.

“We went through months of due diligence and analysis, and landed on that area because it makes sense. Downtown Vancouver is only so big. That area right now is under-utilized space. There are a lot of old industrial buildings and tired buildings that look like they are about to fall apart.

“It was due for a change. And with the new St. Paul’s (Hospital) and False Creek Flats plan they worked on a few years ago, it was the natural progression for growth for downtown Vancouver.”

Something else happened in the last couple of years as well, which he couldn’t have predicted: the accelerated e-commerce trend that has transformed the retail world and the demand for warehousing, and has complicated the supply chain, especially during a pandemic.

“To have industrial pick up the way it has, because of COVID and drop-shipping companies, that we did not anticipate. We are definitely enjoying some of the upside of what the market has done.”

A change for the industry is the sudden attention on industrial, which had long been considered the least exciting sector of real estate. Now under a spotlight, there’s a little more competition.

“Previously, we were working in the shadows, doing it quietly. There were a lot of overlooked properties or projects that other people may not think were sexy or attractive, or profitable enough. It really takes that creativity and another lens to make it something that it’s not.”

Creativity in one of the world’s oldest industries such as land development is not an easy endeavour, he added. It’s a world bound by restrictions. The costly ramp at Frameworks, which required considerable design effort and requires considerable space, is a uniquely marketable feature.

“A lot of people don’t think about the space a ramp takes. It can only be so steep, so with a site that’s not overly huge, having a ramp work with comfortable turning radiuses meant the design was a lot (of expense), but the cost of the space was a lot as well. It’s like an amenity. It’s there to service the building.”

Once demolition is underway at the start of the New Year, it will take two years to complete Frameworks. He hopes for occupancy by the end of 2023.

“I think we are just really excited to be doing something kind of special and different in such an old industry, in real estate and specifically industrial. Once this Clark (Drive) building gets built and all the users and tenants are in, we are excited to see how the building reacts.

“And what I mean by that is sometimes you design and develop a building and a lot of people forget about it and leave. ‘We made our profit, see you later.’ But once people start using the building and interacting with it, they will think of creative ways to use the ramp, the second-floor industrial.

“That’s what I’m excited about, to give it life. I’m excited to see it. We have taken it from one to five. We want to see what five to 10 looks like.”

Seeking a large industrial space in Vancouver? There are none