Gary Silverberg is selective about the projects he develops, so Début in Barrie is his first sinc... 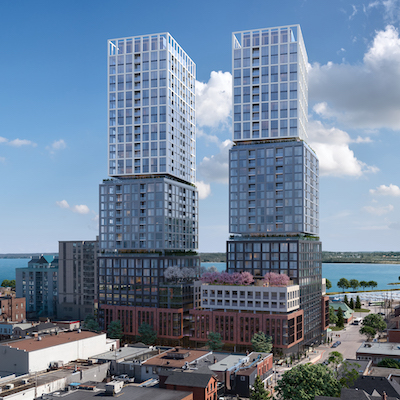 Gary Silverberg is selective about the projects he develops, so Début in Barrie is his first since Toronto’s ART Condos was completed in 2013.

“What I really enjoy doing is finding emerging neighbourhoods,” Silverberg told RENX. “This was the first one since ART Condos that really resonated to the degree that I wanted to go back to work.”

The base of the complex at the corner of Dunlop and Mary streets will feature curated shops and a pedestrian arcade serving as the gateway to the Lake Simcoe/Kempenfelt Bay waterfront, marina, Centennial Beach, farmers’ market and public transit.

Début’s second tower will likely have between 200 and 260 units. Silverberg said a “top international hotel chain” is working with him and was interested in the site, but the COVID-19 pandemic has affected its ability to make decisions on moving forward.

“If they take a portion of the building, there will be less units,” said Silverberg. “We’re just very happy with the amount of interest we have in a hotel-friendly concept.”

Sales for Début launched on Aug. 20 and Silverberg said the early reception has been very positive. Occupancy is being targeted for four years from now.

Oleson Worland Architects, Scott Shields Architects and Johnson Chou are responsible for Début’s design, which will maximize views of the waterfront and feature flexible spaces that allow for multiple uses, such as an in-suite gym that changes to a guest room, den or office.

Début should appeal to a variety of buyers, including investors, first-timers and downsizers who will live there full-time, as well as those seeking a second residence.

They can all take advantage of the area’s boating, fishing, canoeing, biking, hiking. golf, ice-fishing, snowshoeing and skiing opportunities.

Barrie is located about a 45-minute drive north of Toronto. Début is to be constructed just a few minutes from both Highway 400 and a GO train station, which connect the city of just over 150,000 residents to the Greater Toronto Area.

Silverberg acquired the 1.25-acre site two years ago from a private owner for an undisclosed price. He took it through the rezoning process immediately, since there was “pretty derelict retail” on the property and he saw great potential in what it could become.

“I think we bought at the right time because of the recognition of the transformation of downtown Barrie into something special,” said Silverberg. He noted the arrival of power centres, Walmarts and Costcos “devastated downtowns and they changed the culture of retail.

“Now there’s a transformation” of those downtowns, he added. 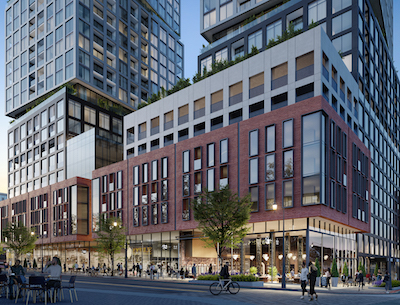 Début is being funded by Silverberg and what he called a small group of investors, as well as typical bank financing.

Silverberg is a visual artist who also has more than 40 years of real estate experience, which he outlined this way:

“I started off as an agent and did sales for housebuilders and was in the residential business for a couple of years before I went into commercial. I was the first outside tenant rep for retail and restaurants that I know of in Canada.

“We did tenant representation for Hard Rock Café, Shopsy’s, The Pickle Barrel, Lick’s Home Burgers & Ice Cream, and a bunch of names you’ve never heard before.

“When Toys “R” Us came to Canada, we put together a concept centre for them. I did farmers’ markets’ concepts and all sorts of stuff, and from there I got into development and have done everything from master-planned communities, high-rise condos, retail, industrial and office buildings.”

Toronto’s ART Condos — an 11-storey, 152-unit mid-rise at Dovercourt Road and Sudbury Street, just south of Queen Street West — was the first development Silverberg took the lead on via Triangle West Developments, a company he created.

He has similarly formed Barrie Waterfront Developments to build Début.

There are no other developments in Silverberg’s current future plans, as he expects to focus on Début until its completion.

“I’m not a mass production builder just trying to come up with another project because that’s my job. I come up with projects when I think a neighbourhood is on the verge and has pent-up opportunity and pent-up equity that hasn’t been recognized.

“It may take me 10 years to find another neighbourhood like this or Queen West.”

Danny Kucharsky Residential Development Quebec City Jul. 29 2020
Steve McLean Business reporter
Steve is a veteran writer, reporter, editor and communications specialist whose work has appeared in a wide variety of print and online outlets. He’s the author of the book Hot Canadian Bands and has taught reporting to college students. He is based in Toronto.