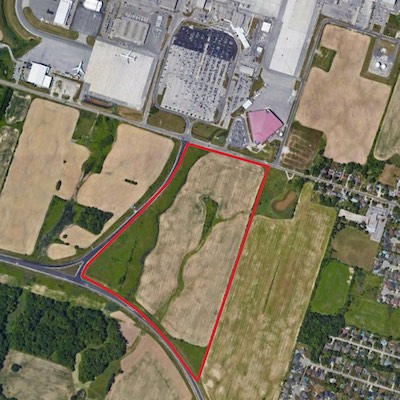 Calgary-based Hopewell Development has partnered with Nicola Wealth Real Estate to purchase two industrial development sites in the Hamilton area for a total of $80 million.

The North Service Road site was purchased for $44.075 million while the Airport Road site went for $36 million.

Murray DeGirolamo, president of Hopewell, told RENX both transactions were sourced off-market and bought from private individuals. He expects the locations will attract strong interest from users looking to benefit from the regional highway connectivity.

The two sites will add more than one million square feet of development to Hopewell’s existing pipeline of projects throughout the Greater Toronto Area (GTA), and the larger region south and west of the GTA known as the Greater Toronto Hamilton Area, or GTHA.

“Market demand and limited supply within the market for readily developable industrial land is a commodity. We like the strategy like an infill sort of smaller market site that allows you to come to market a bit quicker,” said DeGirolamo.

“There’s not 100-acre sites lying around the GTA, but at the same time those are big cumbersome sites that typically take years to put into production (due to) the entitlement process. These sites allow you to be quick to market and capitalize on the current environment and the strength of the market today.”

Given the limited supply of lease options and escalating land prices in other submarkets across the GTA, the GTHA industrial markets west of Toronto in Oakville, Burlington, and Hamilton will attract strong interest from users because of their access.

DeGirolamo said the industrial real estate market is strong across the GTHA today. All the markets have seen increased values over the course of the last 12 to 18 months.

“We’ve seen . . . where companies are onboarding more inventory into North America and Canada as a whole as opposed to this just-in-time strategy.

“There’s more e-commerce . . . the growth of e-commerce through COVID. COVID had moved the pendulum even more than we were already seeing from a demand curve. It’s crazy right now.” 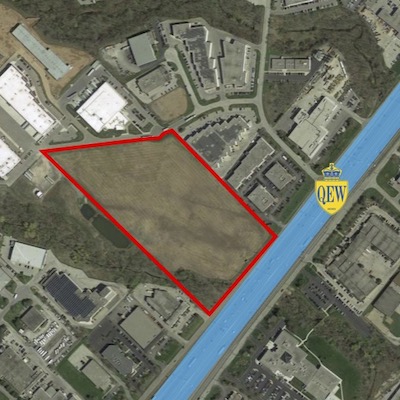 Plans for the Hamilton, Burlington properties

Both properties are being developed on a speculative basis.

Depending on the approval process, the North Service site will be ready for occupancy in early 2024, with occupancy for the Airport Road site in early 2025.

Hopewell Development, with offices in Toronto and Phoenix and its headquarters in Calgary, currently has 22 projects under development for just over 9.1 million square feet on 579.54 acres in Alberta, Arizona, Manitoba, Nevada, Ontario and Texas.

The bulk of the activity is in Alberta with 10 projects of just under 5.9 million square feet on 390.78 acres.

DeGirolamo said the company has had a presence in Toronto since the late 1990s but he was challenged in 2016 to grow its footprint and brand in the area to become a true player in the market and create a national footprint.

“We have probably just in the GTA about 4.5 million square feet in the pipeline through various partnership relations or joint venture relations. It’s meaningful. We probably have a couple hundred acres that we have in the pipeline,” he said.

“Vancouver is very challenged to get into. We’re well heeled in Alberta. So it really leaves Toronto, Montreal and the Maritimes.

“We’ve really been concentrating on trying to grow that GTA footprint and expand our brand across the country.”

In a statement, Alex Messina, director of acquisitions at Vancouver-headquartered Nicola Wealth Real Estate, said the firm is excited to expand its partnership with Hopewell.

Nicola has completed several other industrial projects in other Canadian and U.S. markets with the Calgary-based company.

“These projects provide good geographic diversity to our other industrial projects we have underway across the GTA, where leasing velocity continues to be strong,” said Messina, adding Nicola continues to concentrate its growth in major Canadian markets such as Vancouver, Winnipeg, Calgary, Victoria, Kelowna, Montreal and Toronto.

Nicola’s focus is on acquiring income-producing properties and executing development and value-add strategies.

Soneil tops $1B in AUM with 2 GTA industrial acquisitions

Steve McLean Commercial Market Reports National Feb. 7 2022
M
Mario Toneguzzi Business reporter
Mario Toneguzzi, based in Calgary has 37 years of experience as a daily newspaper writer, columnist and editor. He worked for 35 years at the Calgary Herald covering sports, crime, politics, health, city and breaking news, and business. For 12 years as a business writer, his main beats were commercial and residential real estate, retail, small business and general economic news. He nows works on his own as a freelance writer and consultant in communications and media relations/training.