How Blackstone became one of the world’s top warehouse owners

Guest Submission: Blackstone is one of the largest private equity firms in the world. With $650 b... 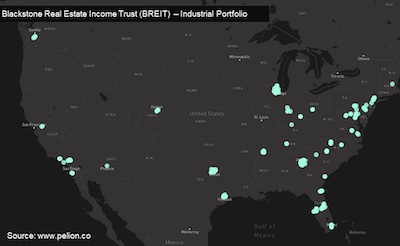 The locations of U.S. industrial properties in Blackstone Real Estate Income Trust’s portfolio. Many of the properties are part of Link Industrial, Blackstone’s U.S. logistics platform. For a full-sized, pop-out version of this map click this link. (Source: Pelion)

Guest Submission: Blackstone is one of the largest private equity firms in the world. With $650 billion worth of assets under management, the company’s investment portfolio ranges from hotel chains to technology companies to shipping terminals.

One of its biggest convictions and holdings over the past decade, however, has been warehouses.

Founded in 1985 by two former bankers at Lehman Brothers, Blackstone today is one of the world’s top owners of logistics real estate with a portfolio that spans over 950 million square feet in places like the U.S., Europe, China, and India.

Based on data sourced from Pelion, we chronicled how the private equity giant rose to become one of the world’s top warehouse owners.

Blackstone’s acquisition strategy centres on buying real estate at a discount to replacement cost and fixing those assets to enhance their value. These opportunities tend to arise during downturns or when a particular sector is out of favour.

The year 2008 was a serendipitous moment for Blackstone, as a confluence of activities provided favourable tailwinds for the firm to implement its strategy en masse.

First, the technological infrastructure that supports the e-commerce ecosystem we are familiar with today was emerging.

The first version of Apple’s iPhone, which introduced the world to the concept of the smartphone, was launched a year earlier. Third-generation (3G) internet technology, which enabled mobile browsing, was also beginning to gain mass adoption in the U.S.

Second, Blackstone had just gone public at the peak of the market in June 2007, raising $4.1 billion in what was one of the largest IPOs at that time.

Finally, the fall of Lehman Brothers had shuttered the credit markets and forced over-leveraged owners to unwind their properties at steep discounts, sending real estate prices down by 30 per cent across the board.

Armed with a new war chest, Blackstone went on the offensive, buying $2 billion worth of warehouses totalling over 45 million square feet between 2010 and 2011.

The firm housed these properties in a company called IndCor Properties, which by 2014 had become one of America’s largest industrial landlords with a portfolio of 117 million square feet and 3,500 tenants across the U.S.

In 2015, the stock market had recovered most of the ground lost during the Great Financial Crisis and capital began to return to real estate.

Blackstone took the opportunity to exit IndCor by selling it to Singapore’s sovereign investment fund GIC for $8.1 billion, a transaction that earned Blackstone $2 billion in profits.

In 2017, Blackstone similarly exited Logicor, the European counterpart of IndCor launched in 2012, by selling it to China’s sovereign investment fund China Investment Corporation for $14 billion, the largest real estate transaction in Europe.

The sale of IndCor and Logicor not only underscored the demand for logistics assets but also gave Blackstone additional dry powder to deploy.

With its thesis proven right twice on two different continents, Blackstone doubled down on its conviction and largely replicated what it had previously done with IndCor and Logicor.

The properties acquired through these transactions were consolidated into a nationwide logistics platform called Link Industrial, which today boasts over 3,000 properties spanning 400 million square feet throughout the U.S.

Also in 2019, the company launched Mileway in Europe and DragonCor in China. Both companies have become top owners of logistics assets with 120 million and 40 million square feet under management, respectively.

The coronavirus pandemic is an echoic reminder of how Blackstone got its start in the warehouse business. With some uncertainty-driven selling, and surging online sales, Blackstone once again did not let a good crisis go to waste.

In 2021, the company closed on the acquisition of WPT Industrial REIT for $3.1 billion, which strengthened its U.S. footprint by another 37 million square feet.

Around the same time, the firm spent $2.8 billion buying U.S. and European assets from Cabot Properties.

Most recently, Blackstone entered India to capitalize on its rapidly growing e-commerce landscape through the establishment of Horizon Industrial Properties. Horizon today has 16 properties spanning 24 million square feet and has plans to double its footprint over the next two years.

All told, Blackstone has acquired over 1.2 billion square feet of logistics assets totalling some $70 billion over the past decade.

The firm’s ability to recognize opportunities hidden in crises while patiently pursuing its long-term conviction not only earned it a top spot in the industry, but also makes it a noteworthy case study for building and scaling a global real estate platform.

Vasant Jain Founder, Pelion
Website: http://pelion.co Vasant is the Founder of Pelion (www.pelion.co), a SaaS-based real estate investment intelligence platform that tracks the real estate holdings and performance of REITs and private real estate funds. He is also the Founder and CEO of Alphabridge Group (www.alphabridge.co), a corporate finance and strategy consultancy. Prior to founding Alphabridge, Vasant worked in investment banking and venture capital. Vasant is a CFA Charterholder and earned a Bachelor of Commerce with Honors degree from the Sauder School of Business at the University of British Columbia.