Montreal’s Marché Central, now in its sixth phase of development, has become one of Canada’s top-... 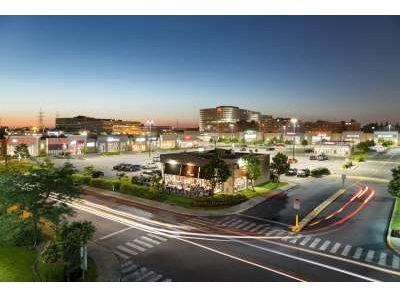 Marché Central will soon have Walmart and Decathlon stores open as part of its sixth phase of development by owner QuadReal Property Group. (Courtesy QuadReal)

Montreal’s Marché Central, now in its sixth phase of development, has become one of Canada’s top-performing power centres due to its mix of strong tenants, a central location, high occupancy and productivity, says an executive with its owner QuadReal Property Group.

“We have very carefully curated a strong roster of over 60 outlet brands, service retailers and large-format tenants who all share our value philosophy,” said Andy Clydesdale, executive vice-president of retail at QuadReal Property Group.

This creates “a compelling destination for those seeking the best product at the best price.”

“Really, when it comes to convenience and visibility, does it get better than the intersections of Highways 15 and 40?”

In late August, QuadReal announced a new 35,000-square-foot Décathlon sports store for the power centre’s sixth phase, joining a previously announced 140,000-square-foot Walmart Canada Supercentre. Both are scheduled to open during the summer of 2023.

Marché Central currently has 16 campus-style buildings with a gross leasable area of more than one million square feet. Its other tenants include Costco, Réno-Depot, TJX brands and Bureau en Gros (Staples).

Clydesdale said Marché Central meets the essential needs of shoppers with a strong retail mix of big box and outlet brands: “Part of our secret sauce is being extremely succinct when it comes to retail curation. Everything at Marché Central revolves tightly around that value proposition.”

The new Décathlon and Walmart Canada Supercentre will comprise about 28 per cent of the more than 630,000-square-foot, sixth phase of Marché Central.

Development of the remainder of the sixth phase “will take a multi-phased approach with the addition of both large-format and lifestyle-oriented retailers.”

The new phase will also include a food emporium, more casual dining options, green space, a network of landscaped walkways and a central gathering area.

The new Walmart, which will cost $20 million, will have a 125,000-square-foot green roof in the form of an active farm. It will be the first Walmart in Canada with a greenhouse on its roof, Clydesdale says.

Other sustainability features in the Walmart will include natural refrigerant for the store’s refrigeration system; LED lighting; ultra-low-flow lavatories, urinals and water closets; recycled content within its building materials; and low VOC finishes.

The Décathlon store will add to the power centre’s healthy and active lifestyle mix, which includes Mountain Equipment Company, PUMA, Golf Town, Under Armour and a Nike Factory Store.

Décathlon currently has 11 stores across Canada and more than 1,700 stores in over 60 countries.

More food options and green spaces are planned for Marché Central’s existing sections, as well as additional seasonal events in the central square. “Creating a bicycle network is also high on our priority list,” Clydesdale said.

“The future of retail, as I see it, is about having a really unique point of view and staying true to it and offering a compelling experience that people will literally write home about,” he added.

“In other words, total reinvention is afoot and if not, should be.”

Based in Vancouver, QuadReal Property Group is a global real estate investment, operating and development company with $67.1 billion of assets under management.

Clydesdale noted the company has several developments underway in Canada, including Oakridge Park in Vancouver, a joint venture of Westbank and QuadReal, which replaces the Oakridge Centre mall.

He describes the 28.5-acre redevelopment as “one of the most monumental redevelopments currently underway in North America given the sheer scale, ground-breaking design and overall ambition.”

The Post, also in Vancouver, is “one of the most ambitious heritage redevelopment projects in Canada’s history.” The project involves a redevelopment of the downtown Canada Post building on West Georgia Street.

It will include 1.1 million square feet of office space and more than 185,000 square feet of retail, and will be anchored by Amazon’s Vancouver offices.

The mixed-use, 83-acre development at Highway 400 between Highways 407 and 7 in the Vaughan Metropolitan Centre will include a variety of housing, entertainment, shopping and dining.

The company’s 32-acre Cloverdale Mall site in Toronto “is being completely reimagined to create a vibrant, sustainable and innovative mixed-use urban community.”

“To say that this is an exciting time in both retail and our company’s history is an understatement.”

Steve McLean Residential Development Toronto / GTA May. 31 2022
D
Danny Kucharsky Business reporter
Danny is a multiple award-winning journalist based in Montreal, who has written for about 75 magazines and newspapers in Canada and the U.S. His credits include The Globe and Mail, Montreal Gazette, Maclean's, Chicago Tribune and a wide variety of business, specialized trade and medical magazines. Danny was also the Montreal correspondent for Marketing Magazine for several years.