QuadReal and Menkes are continuing to expand their partnerships, paying $56.18 million for a one-... 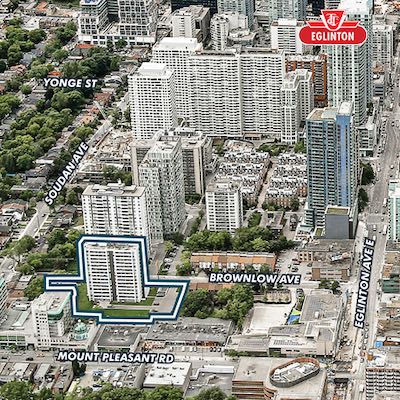 QuadReal and Menkes are continuing to expand their partnerships, paying $56.18 million for a one-acre apartment property in midtown Toronto and launching the latest elements at their Assembly Park development at the Vaughan Metropolitan Centre.

Royalwood Apartments is located at 55 Brownlow Ave., near Eglinton Avenue East and Mount Pleasant Road. It was sold by the Kagan family, which developed the building in 1965, in a deal brokered by CBRE.

QuadReal and Menkes executives declined interview requests, but CBRE representatives provided details about the property and the transaction.

“It was family-owned and operated and was part of a bigger portfolio,” CBRE vice-president of investment properties Barbara Bardos told RENX. “This was their last building and (a) prized possession.”

“There was a market-setting price per door (just shy of $465,000),” said CBRE Land Services Group vice-chairman Mike Czestochowski. “There’s a nice play there for future development with the adjoining properties.”

“It was well-kept, but maintained a fairly standard rental quality,” Bardos added. “There’s still a lot of value-add that could be materialized there with some capital expenditures into those units and maybe fixing up the entire building and updating and modernizing the lobby.”

Royalwood Apartments was marketed for six weeks and Bardos said there was plenty of interest from institutional and private investors as well as REITs.

CBRE Land Services Group executive vice-president Lauren White said there isn’t enough room on the Royalwood Apartments site for intensification, “but based on the size of the building and the number of units for the rental replacement, it could be a long-term redevelopment site if you were to rebuild on the property.”

Menkes owns eight townhouses immediately north of Royalwood, at 61 to 75 Brownlow, and applied last year to replace them with a 35-storey condominium tower, a five-storey podium, and five two-storey townhomes.

The Turner Fleischer-designed building would include 282 one-bedroom, 61 two-bedroom and 41 three-bedroom units. Two levels of below-grade parking would provide 69 vehicle spaces along with 346 spaces for bicycles.

Quadreal and Menkes also officially launched Assembly Park on Friday at the Vaughan Metropolitan Centre (VMC). Designed as a master-planned, mixed-use development, the firms call it the future “soul of the VMC.”

The VMC spans an area bordering highways 400 and 7 in Vaughan and is designed to become a high-density downtown core for the region, which sits just north of Toronto and is centred around an extension of the city’s subway system and transit hub.

Development on residential aspects of the community is already well under way. QuadReal and Menkes have launched and sold several residential projects, including Mobilio, Festival and Grand Festival, with Bravo the next tower to launch. The district is to house about 6,500 residents.

The district will ultimately include “diverse and modern housing options, compelling retail experiences, new schools, an extensive network of lush parkland and socially-oriented public spaces” according to a release.

“The creation of Assembly Park has been a careful and thoughtful process and we are thrilled to be officially launching this dynamic new community,” said Toby Wu, executive vice-president of development for Canada for QuadReal Property Group, in the release.

“The creation of Assembly Park will transform the Vaughan we know today, making it not just a suburb of the GTA, but rather a destination in and of itself,” said Alan Menkes, president of high-rise for Menkes Developments, in the announcement.

Vancouver-headquartered QuadReal manages a $67.1-billion global real estate portfolio in more than two dozen cities on behalf of its stakeholders.

Toronto-based Menkes was founded in 1954 and has become one of the largest private developers in Canada. It sold more pre-construction high-rise condos in Canada than any other developer in 2021.

Menkes has more than 5,000 condo units under construction across the Greater Toronto Area and another 15,000 under development.

Kathy Kerr Residential Development British Columbia May. 25 2022
Steve McLean Business reporter
Steve is a veteran writer, reporter, editor and communications specialist whose work has appeared in a wide variety of print and online outlets. He’s the author of the book Hot Canadian Bands and has taught reporting to college students. He is based in Toronto.