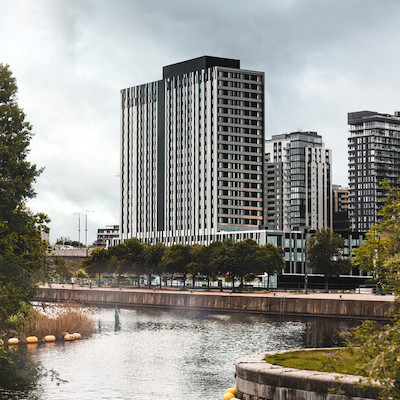 Ivanhoé Cambridge, Cogir Real Estate and Pomerleau will invest about $200 million to build Haleco, a mixed-use residential, office and commercial project on a site linking Old Montreal and Griffintown that won the C40 Reinventing Cities competition in 2019.

Construction of a 21-storey building on a former City of Montreal public works site at 995 de la Commune St. has begun and is slated to complete in Q3 2024.

Ivanhoé has an 80 per cent stake in the project, while Cogir and construction firm Pomerleau have 10 per cent each. Cogir will manage the property once it is built.

The project is part of Ivanhoé’s commitment to achieve carbon neutrality in its portfolio by 2040, said Élise Proulx, head, Quebec economic development at Ivanhoé Cambridge.

The 338,000-square-foot project will have 367 rental units, including 40 social or community housing units for low-income residents, 77 affordable rental units and 250 market rentals.

There will be different unit sizes and numbers of bedrooms, but the layouts haves not been finalized, Proulx said.

The C40 Reinventing Cities competition encourages the development of low-carbon projects that offer innovative solutions to the challenges of climate change and urbanization.

The competition was held before the city of Montreal established its “20-20-20” policy that calls for 20 per cent social housing, 20 per cent affordable housing and 20 per cent housing for families in new developments, Proulx said.

“It’s not exactly 20-20-20 but it’s in the same spirit as the new regulations,” she said, noting the city’s approval of the development.

The federal government has provided a $135-million, low-cost loan to offset rental costs for the project’s affordable housing component, Proulx said. Affordable rental rates will be established in 2024 based on average incomes for Montreal, she said.

Haleco will also have just under 43,000 square feet of gross leasable office space on the second and third floors.

Despite today’s high vacancy rates (16.9 per cent for downtown Montreal) and the current popularity of the hybrid work model, “we think we’ll rent (the office space)” in Haleco, probably to people in the community, Proulx said. “It’s not an issue.”

There will be just over 26,000 square feet of gross leasable retail space on the ground and mezzanine levels, including a community space similar to a public market that could house a variety of shops such as a zero-waste grocery store, neighbourhood shops and restaurants.

Noting the European roots of Reinventing Cities, Stéphane Côté, partner and president of the major projects division at Cogir, said “Europe is ahead of us” when it comes to cutting-edge urban development. Haleco will enable other similar projects to be built, he maintained.

Haleco is aiming for LEED Platinum certification with a design focused on energy efficiency. The building envelope will have high thermal resistance and there will be heat pumps on each floor.

About 57 per cent of the land on the site will be revegetated, with an urban farm of about 5,400 square feet, community garden, fruit trees and a pollinator garden, with native and adapted species.

Côté said there will be a low number of underground parking spaces but did not divulge the number. There will be several charging stations for electric cars.

Haleco will be located next to an existing bike path and will be near the new REM light-rail system. It will be a 15-to-20-minute walk from two Metro stations.

Benoit Dorais, mayor of Montreal’s Sud-Ouest borough and vice-president of the city’s executive committee, said the project fits into the city’s objectives to reduce greenhouse gases by 50 per cent by 2030 and to be carbon-neutral by 2050.

Martin Jacques, executive vice-president, Quebec building operations, at Pomerleau, said Haleco will surpass LEED standards by taking such steps as using some recycled concrete, a move that will reduce concrete usage by 20 to 30 per cent.

The project team will produce an annual report to the City of Montreal and C40 for 10 years to demonstrate Haleco’s progress in minimizing its carbon footprint.

“It’s more than greenwashing,” Côté said of the project, adding there is “an urgency to move” to reduce the effects of climate change.

Danny Kucharsky Commercial Market Trends Greater Montreal Jun. 9 2022
D
Danny Kucharsky Business reporter
Danny is a multiple award-winning journalist based in Montreal, who has written for about 75 magazines and newspapers in Canada and the U.S. His credits include The Globe and Mail, Montreal Gazette, Maclean's, Chicago Tribune and a wide variety of business, specialized trade and medical magazines. Danny was also the Montreal correspondent for Marketing Magazine for several years.