The LaSalle Canada Property Fund (LCPF) has grown to a gross asset value of more than $1 billion...

The LaSalle Canada Property Fund (LCPF) has grown to a gross asset value of more than $1 billion since its launch in December and the money is quickly being deployed. 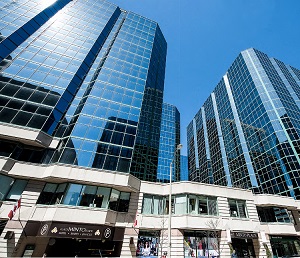 The LCPF secured up to $350 million of new capital commitments earlier this month, and has used portions of it to acquire Calgary’s Market at Quarry Park and a 33 per cent interest in Ottawa’s Minto Place. The latter is one of the National Capital Region’s largest premier office properties, a three-tower complex over a large commercial podium.

“Everyone’s very energized,” said LaSalle Canada chief executive officer John McKinlay. “We’ve put in a lot of hard work and we’re very excited about our new initiatives and how the various pieces have fit together.”

LaSalle Investment Management’s first open-ended real estate fund targeting core properties in major markets across Canada was seeded with a $440-million portfolio of nine properties from a U.S.-based corporate pension fund which was exchanged for an equity position. The investor has additional Canadian properties with a potential value of up to $310 million which could be transferred into the LCPF for additional equity in coming years.

The most recent influx of capital is from a multilateral government pension fund, a European-based global financial institution that accessed the LCPF through a parallel structure established in Luxembourg to allow access to certain European investors, as well as by LaSalle Investment Management and its employees.

“What really resonates with long-term core investors are the historical returns and low volatility of Canada,” said McKinlay. “We designed a core investment fund for both the domestic and international communities.”

It was the second transaction involving Minto Place in the past 16 months. Investors Group had acquired its 50 per cent share in the complex from Minto Capital last spring.

“It was a deal that was brought to us to see if we’d be interested in it,” said McKinlay, who called Minto Place a best-in-class asset for Ottawa. “(LaSalle Canada head of acquisitions) Stephen Robertson had a relationship with Minto and I certainly had a relationship over the years with the other partners, so it was a good fit.

“There’s a trust level there and an alignment of interests.”

McKinlay took over as CEO of LaSalle Canada last August. He previously served as executive vice-president of acquisitions for Canada at Bentall Kennedy and held senior positions at GE Capital in Toronto.

Minto Place is comprised of three class-A office towers, the retail podium and a four-level parking garage that occupies an entire city block in Ottawa’s central business district. It has 945,000 square feet of rentable area and is 97-per cent leased. Sixty-four per cent of Minto Place is occupied by government tenants.

Market at Quarry Park is a shopping centre in the Quarry Park neighbourhood developed in 2009 as part of a 400-acre master-planned community. It’s anchored by a Calgary Co-op with a lease that extends through 2030. The property is 99 per cent leased to a mix of national, regional and local tenants.

When fully built-out, Quarry Park is anticipated to house more than 10,000 residents and 18,000 employees. The Market at Quarry Park is the sole major retail hub at the centre of the node and experiences strong traffic.

Sources familiar with the acquisition confirmed the purchase price was $52.65 million, which was all equity and represents a 100 per cent interest.

“Our seed transaction had no retail and we wanted retail exposure,” said McKinlay. “This is a newer generation, proven and defensive, necessity-based retail centre in a growing market.

“There are more people moving there and some more office development could eventually happen. Transit is improving and, given where Alberta is, in our view pricing was attractive.”

The LCPF’s portfolio includes 11 assets comprising 3,467,461 square feet. Its other nine properties are:

The Toronto industrial properties were 100 per cent leased earlier this year and leasing gains have been made in the Ottawa and Vancouver office buildings, according to McKinlay.

“We’re feeling pretty good about the assets and what our asset managers are bringing to the table,” he said. “They’ve really embraced the new assets and are working hard to improve them.”

McKinlay said the LCPF has new acquisitions lined up for the third and fourth quarters, but he’s not yet able to reveal any details. However, he added that Montreal is a target market and the fund is interested in urban retail assets.

“It’s an open-ended fund, so certainly we’ll evaluate the markets. We want to make further investments, in a prudent yet expeditious manner, to put our clients’ capital to work. We will evaluate opportunities as we go and make the best decisions as we build up this fund.”

LaSalle Investment Management is a wholly owned, operationally independent subsidiary of JLL, one of the world’s largest real estate companies.

It has approximately US$60 billion of private and public equity and private debt investments under management with a client base that includes public and private pension funds, insurance companies, governments, corporations, endowments and private individuals around the globe.