Madison Group’s ALiAS is underway, with more to come

Madison Group’s ALiAS Condos has broken ground with more than 90 per cent of its units sold, as t... 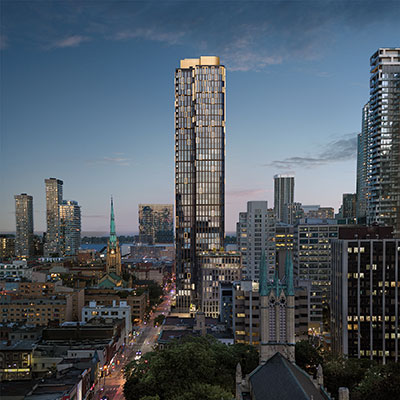 Madison Group’s ALiAS Condos has broken ground with more than 90 per cent of its units sold, as the developer continues to steadily work through its Toronto pipeline.

Part of the site at the southwest corner of Church Street and Richmond Street East had been part of the Madison Group portfolio for more than 30 years. Ownership consolidation and the 2020 acquisition of adjacent land formerly occupied by a bar and a laneway opened the door for Madison Group to begin demolition late last year to prepare for the development of ALiAS.

The Teeple Architects and Turner Fleischer Architects-designed ALiAS will have 546 suites, 18,000 square feet of indoor and outdoor amenities, and more than 7,000 square feet of street-level retail space. Studio Munge is overseeing the interiors, with The MBTW Group doing the same for the landscaping.

Suites in the 45-storey building will range in size from 360 to 1,400 square feet. Just over 10 per cent of the suites will have three bedrooms, about 40 per cent will have two bedrooms, there will be a small amount of studios and the remainder will be one-bedroom units. Prices began in the mid-$600,000s.

ALiAS’ amenities will include:

• indoor and outdoor co-working spaces, with a coffee bar and private meeting rooms;
• a fitness centre with private workout pods and a dedicated Peloton room;
• curated indoor/outdoor children’s play areas, including craft rooms and a projector lounge;
• an indoor/outdoor pet spa;
• outdoor lounge areas and grill stations;
• private dining areas;
• guest suites;
• 24/7 concierge service with automated parcel storage;
• and a new public park on the west side of the building.

The retail space will be divided between two locations: on Richmond Street and at the corner of Church and Lombard Streets. It’s expected to be occupied by restaurant/bar and service-oriented retail tenants.

Shoring is mostly complete and excavation will begin soon. January 2026 occupancy is being targeted for ALiAS.

There are a number of condos at various approval and development stages within a few blocks of ALiAS, including Madison Group’s proposed 53-storey, 296-unit mixed-use condo at 15 Toronto St. that’s in the early consultation stages.

“I think the area is an amazing location because of all of the amenities that surround it,” Madison Group vice-president of high-rise Josh Zagdanski told RENX.

“The urban fabric is continuing to evolve with more and more density. I think that will continue to better the amenities in the area and continue to attract more employers like Google, who have come into the area with their new office building.”

The company has several other Greater Toronto Area (GTA) condos under development or in the planning stages.

The two-tower, 658-unit Nobu Residences project at 15 Mercer St., which also includes a hotel and restaurant, is sold out. Westdale Properties and Adler Investments are partners in the project, where occupancy will begin next year.

Madison Group and Westdale are also partners in The Capitol, a 14-storey, 155-suite condo that launched sales a year ago and is now under construction at 2500 Yonge St.

“That project has heritage retention underway, with shoring and excavation to commence imminently,” said Zagdanski.

Madison Group is involved in the revitalization and redevelopment of Scarborough’s Golden Mile area on Eglinton Avenue East between Pharmacy and Warden Avenues, where it’s proposing several condo and townhome projects.

“Our official plan amendment was approved and we are now in for rezoning and site plan on the entire community,” said Zagdanski. “That is a very large project at close to three-and-a-half-million square feet across 20 acres.”

There are still many details to work through with municipal officials and community members, but nearby stops on the delayed Eglinton Crosstown light rail transit line have already been built in advance of future development.

“Yonge and Eglinton has rezoning that we’ve just put in and we’re in the early stages of communication and input from the City and those communities.”

Views of the Toronto condo market

Zagdanski said Madison Group continues to look for new acquisition and development opportunities across the GTA, but there was nothing he could talk about at this point.

Rapidly rising interest rates have created a degree of uncertainty for both condo buyers and developers, resulting in a more subdued market than what was experienced early this year.

The current environment hasn’t affected Madison Group’s condo launch plans to this point, though that could change next year.

Zagdanski believes things will begin to rebound somewhere between mid-2023 and early 2024.

“I’m neither an economist nor a central banker but, at the end of the day, the fundamentals of Toronto being a great world-class city and the financial centre for Canada, with the employment that exists and the growing immigration that continues to come to the GTA, I think, long-term, real estate in Toronto is a great investment,” said Zagdanski.

“It’s wonderful to see the evolution of it and how fast it has grown. I think Toronto will continue to grow as a world-class city and we’re happy to be a small, small part of that.”

Steve McLean Residential Development Toronto / GTA Sep. 22 2022
Steve McLean Business reporter
Steve is a veteran writer, reporter, editor and communications specialist whose work has appeared in a wide variety of print and online outlets. He’s the author of the book Hot Canadian Bands and has taught reporting to college students. He is based in Toronto.