Mattamy Homes has been selected as the joint venture partner for the first phase of QuadReal Prop... 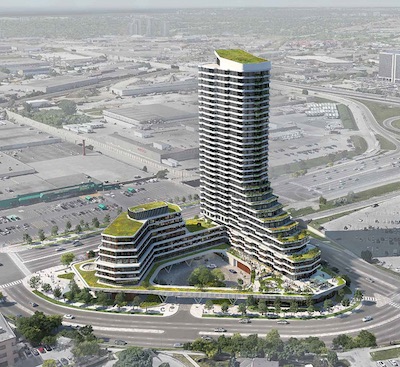 A rendering of the Triangle Site to be redeveloped as part of the Toronto Cloverdale Mall redevelopment by QuadReal Property Group and Mattamy Homes. (Courtesy Quadreal)

Mattamy Homes has been selected as the joint venture partner for the first phase of QuadReal Property Group’s Cloverdale Mall redevelopment project in Toronto. Mattamy will acquire an ownership stake in the standalone 2.3-acre “Triangle Site” adjacent to the mall.

QuadReal and Mattamy will jointly develop the condo project which includes towers of 32 and eight storeys, an extensive connecting podium structure and about 2,400 square feet of retail space. The project will contain more than 500 condos.

“We are thrilled to be partnering with Mattamy Homes on this project as we were very impressed with their executional ability, vision for the site, cultural alignment and fit with our strategic corporate objectives,” said Toby Wu, QuadReal’s executive vice-president, development, in the announcement Tuesday afternoon.

“Additionally, we are excited to embark on this transformational project that fits with our corporate goal of creating dynamic mixed-use, retail-anchored and transit-oriented community hubs in growing suburban centres.”

The project at 2 and 10 The East Mall Crescent will kick-start a massive, multi-phased redevelopment of the 32-acre shopping centre site into a sustainable and innovative mixed-use urban community.

Mattamy will oversee development, construction, and sales and marketing on the Triangle Site, while QuadReal will retain overall strategic direction of the district master-plan. It also maintains long-term ownership of the retail and purpose-built rental components.

“QuadReal is a key partner in our delivery of 13,000 condo sales within the next five years. Their track record of excellence is undeniable and we are thrilled to collaborate on this world-class development,” said David Stewart, president, Mattamy Homes GTA urban division, in the release.

Plans submitted to the city for the larger 32-acre Cloverdale Mall site, located at the intersection of Highway 427 and Dundas Street West in Central Etobicoke, include 10 towers and a series of smaller mid- and low-rise buildings.

The project would deliver over 4,000 residential units – both condos and rental apartments – over 270,000 square feet of retail and commercial space, parks and other amenities, roadways and public spaces.

Virtually all on-site vehicle parking would be underground.

History of the Cloverdale Mall

What is now Cloverdale Mall was first constructed in 1956 as an open plaza with a central pedestrian promenade in a Modernist architectural style. It was expanded and converted to an enclosed mall in the 1980s and underwent major renovations in 2006.

Currently it is anchored by several major retailers including Home Hardware, Rexall Drugstore, Winners, Kitchen Stuff Plus and a Metro grocery store.

The development plan was created in collaboration with the community following an extended public engagement process. To date, more than 15,500 visitors have provided feedback on the project at the 4,000-square-foot Cloverdale Common engagement space at the shopping centre.

Its assets under management total $67.1 billion. QuadReal invests equity and debt in both the public and private markets in Canada and globally.

QuadReal invests directly, via programmatic partnerships and through operating companies in which it holds an ownership interest.

Over its 40-year history, Mattamy has become the largest privately owned homebuilder in North America, and is Canada’s largest new home construction and development firm, delivering more than 8,000 homes annually.