UPDATED WITH COLABOR MOVE: Shovels are now in the ground at the 1.6-million-square foot Écoparc i... 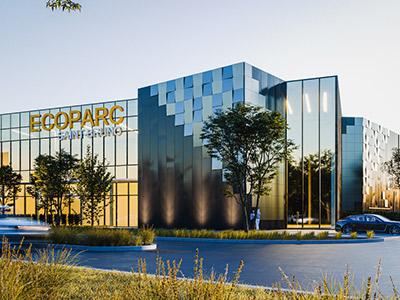 A rendering of the future Écoparc industrial campus in Saint-Bruno-de-Montarville. (Courtesy Montoni Group)

UPDATED WITH COLABOR MOVE: Shovels are now in the ground at the 1.6-million-square foot Écoparc industrial campus in Saint-Bruno-de-Montarville in Greater Montreal.

Montoni Group and partner Alberta Investment Management Co. (AIMCo) have started construction on two buildings, and Montreal-based foods distributor Colabor has announced it will be the tenant in one of the facilities at the campus.

Montoni and AIMCo say the development will incorporate a number of sustainable features and represents an investment of over $450 million. That’s up from an earlier estimate of $400 million last fall.

Montoni and AIMCo say the project will lead to the creation of about 2,000 jobs at the campus, which is scheduled to be completed in 2024.

“We are proud to have the opportunity to participate in the sustainable development of the Saint-Bruno-de-Montarville Écoparc. This is a unique site with strategically located land that will meet the current demand from industries for green buildings,” Dario Montoni, the president of Montoni Group, said in the announcement.

“We are always striving to develop industries’ most eco-friendly and innovative buildings, and we are also committed to completing this project while contributing to the sustainability and vitality of the region in which we operate.”

In a separate announcement Thursday, Colabor said it will move from its current head office and warehouse in nearby Boucherville into new facilities at the Saint-Bruno-de-Montarville property.

The growing company says the facilities will be both more modern, and offer a better operational location.

Colabor distributes food and related products for the retail market (grocery and convenience stores), hotel, restaurant and institutional markets across Quebec, Ontario and Atlantic Canada. The company says it distributes over 35,000 products to more than 15,000 clients.

It has two operating segments, including specialty foods such as fresh fish and seafood, meat and other foodstuffs within its Broadline division.

“Colabor has been in business for over 60 years. Today’s announcement marks the beginning of a new chapter in our history, as we set out to accelerate the implementation of our strategic plan,” said Louis Frenette, Colabor’s president and CEO, in the announcement. “This move will be beneficial for Colabor and its employees, as well as for its clients and partners.”

Colabor said it has signed a long-term lease for the facility. It expects to move into the new facilities late in 2023.

Colabor did not immediately release details about the size of the new facility.

Located at the junction of Hwy. 30 and Route 116 at the eastern edge of the Montreal urban area, Écoparc has highway access to all the city’s main trading markets, from Toronto to the south, Atlantic Canada to the east and the northeastern United States.

In the initial announcement about the project in November 2021, the Montoni and AIMCo said this is the only remaining tract of land in the area able to accommodate such a sizeable industrial development.

It’s also near an established industrial district which includes companies such as Wiptec, Molson Coors and Amazon.

Montreal-based Montoni is seeking certifications under the LEED v4 Gold Core and Shell and the Canada Green Building Council’s Zero-Carbon Building (ZCB) standards. The announcement says the project is targeted to reduce GHG emissions by 50 per cent.

At the building stage, this will include increased energy efficiency via the installation of rooftop photovoltaic panels and reduction of the building materials’ embodied carbon — although no specifics are provided.

Montoni says it already has over 4.3 million square feet of LEED-certified buildings in its portfolio.

About Montoni and AIMCo

AIMCo is one of Canada’s largest and most diversified institutional investment managers, with more than $160 billion of assets under management. AIMCo invests globally on behalf of 32 pension, endowment and government funds in Alberta.