North Vancouver-based Orchard Park Properties was established to facilitate the development of th... 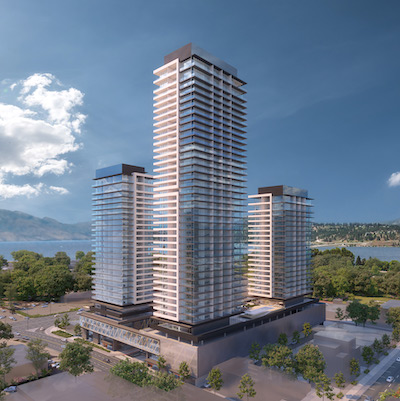 Water Street by the Park in Kelowna is a three-tower condo and mixed-use project by Orchard Park Properties. (Courtesy Orchard Park)

North Vancouver-based Orchard Park Properties was established to facilitate the development of the Water Street by the Park three-tower project in Kelowna, but the company also has ambitions to seek out other residential opportunities in British Columbia.

The Water Street development will include 650 condominium units, plus 45,000 square feet of retail and restaurant space in towers of 24, 28 and 42 storeys in the heart of downtown Kelowna. Anthony Beyrouti, a co-founder of the company, said the 42-storey tower will be the tallest between Surrey and Calgary.

“We started the company to work on this project. We’ve been working on it for the last three years,” said Beyrouti, an entrepreneur with 15 years of experience in the real estate industry. His other company, Venue Kings Ticket Brokers, has been ranked one of B.C.’s fastest-growing businesses for several years.

When asked if the company has plans for other projects down the road, he replied: “Absolutely. It’s definitely the plan. The plan is to do lots.”

He said Orchard Park Properties will target high-growth areas and areas with tremendous in-migration opportunity, with future projects possible in both Kelowna and other areas of the province.

“One of the things that’s happening in Kelowna right now – and the reason we like it so much – is people are picking it over other places. They want to go to Kelowna. They’re purposely going to Kelowna because of all the lifestyle amenities, the different seasons you can get there, the university education, the hospital. All that sort of thing makes it very appealing and we see things like that are very important,” added Beyrouti.

Downtown location for Water Street by the Park

The Kelowna development is located along the 1600 block of Water Street at the eastern end of the William R. Bennett Bridge, one block from Kelowna City Park and Hot Sands Beach. It will offer expansive views of Okanagan Lake, as well as mountain and valley views.

“Having travelled to Kelowna countless times over my life, it’s easy to see why so many people want to live here and our goal is to help them realize that dream,” said Beyrouti. “From the views, the lake and the mountains, to the lifestyle and all the available outdoor activities, Kelowna has tremendous appeal for students, retirees, downsizers and all types of buyers.

“As committed as we are to building this project and these beautiful homes, we’re equally committed to being great corporate citizens that will work collaboratively to enhance Kelowna’s status as a great place to live and work.”

Each of the towers will have retail at the base. The residential units will include a mix of one- and two-bedroom units as well as large three-bedroom corner units facing the lake to address a deficiency in the current condo market, said Beyrouti.

Water Street by the Park will feature resort-style indoor-outdoor amenities including a year-round heated pool overlooking the Marina toward Knox Mountain. There will also be 566 long-term bike spots and 727 secure parking stalls.

The goal is to launch pre-sales in the coming months with construction expected to begin later in 2021. The project will take between two to four years for full build-out.

Beyrouti did not share the total cost of the project.

“It’s about tremendous opportunity and growth in the area. Between the hospital, between the university coming downtown, between the tech hub down the road, between world-class wineries, it all comes together and creates the lowest unemployment rate in all of Canada and fourth-fastest growing city in all of Canada,” said Beyrouti.

“So we just think there’s tremendous opportunity there and we think these three towers together will create something magnificent for the city.”

Recently, Orchard Park Properties announced Apriano Meola, one of its co-founders, will take the role of head of development and construction for the Water Street project.

Beyrouti said Meola is one of Canada’s leading builders of luxury condominium residences, hotels and commercial developments, with more than 25 years of experience leading projects in Canada and the United States.

“Apriano has worked with some of the largest developers in British Columbia and North America. He’s built several high-rises. His expertise in building high-rises is immense,” he said. “I’ve been a real estate aficionado for my entire life, very involved buying and selling real estate and this opportunity to build with Apriano is something that is a spectacular opportunity and I can’t wait to get going.

“Our goal is to build a world-class development that sets a new benchmark for multi-unit residences in Kelowna and makes a valuable contribution to the neighbourhood and the city.

“Adding an industry leader with international experience building luxury waterfront projects to our team is a reflection of our commitment to this project and the people of Kelowna.”

Meola began his development career with Toronto-based Pinnacle International in 1996 before moving to the company’s San Diego office in 2003.

As a project leader for Pinnacle, he led the construction of The Pinnacle Museum Tower, a landmark residence widely regarded as one of the premier properties in downtown San Diego.

Other notable projects include Pinnacle Hotel at the Pier, a hotel and residences development on North Vancouver’s waterfront.

In 2012, Meola moved to Onni Group, where, as VP of construction, he was involved in all aspects of the development, design, construction and management of many projects in the Chicago and Los Angeles markets.

Don Wilcox Commercial Development British Columbia Mar. 17 2021
M
Mario Toneguzzi Business reporter
Mario Toneguzzi, based in Calgary has 37 years of experience as a daily newspaper writer, columnist and editor. He worked for 35 years at the Calgary Herald covering sports, crime, politics, health, city and breaking news, and business. For 12 years as a business writer, his main beats were commercial and residential real estate, retail, small business and general economic news. He nows works on his own as a freelance writer and consultant in communications and media relations/training.