Consumer confidence and retail sales in Quebec are seeing a “spectacular rebound” and retail rent... 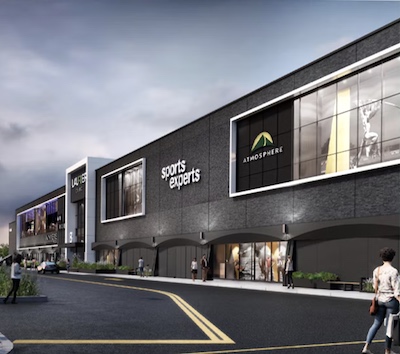 Consumer confidence and retail sales in Quebec are seeing a “spectacular rebound” and retail rents in Quebec City are poised to jump, says Dean Mendel, the founding partner of Forum Properties which specializes in shopping centre development.

He was speaking about the changing face of the retail market during a session of the Quebec Real Estate Forum, held May 4. It was the first Quebec City forum since 2018.

Located at the intersection of Highways 40 and Duplessis, the power centre includes tenants like Marshalls, Walmart, Dollarama and Cineplex Odeon and has a 93 per cent occupancy rate.

“We believe strongly that rents in Quebec City and Lévis will increase considerably in the years to come, because the gap in rents versus other big cities in Canada is much too big,” Mendel said.

Méga Centre Sainte-Foy has solid tenants and secure cash flow, a strong demographic base and potential for redevelopment on its “immense” 2.6 million square foot site. The price tag was affordable, he added. “We paid less than $200 per square foot – far less than replacement cost.”

Active in real estate development since 1988, Forum has a $1-billion portfolio that includes retail plazas in Canada, and both retail and big-box industrial in the U.S.

Mendel says he anticipates Forum will become more active in the greater Quebec City region, given its stability and sustained population growth.

“For an investor, it is a bit less competitive than other Canadian cities,” he said. “We’d like to buy and develop many retail projects and lots of multiresidential rental projects.”

Bricks and mortar is alive and well and traffic has picked up significantly, added Martin Boucher, president of Groupe Boucher, which has 29 Sports Experts, Atmosphere, Entrepot du Hockey and Mathieu Performance stores in Eastern Quebec.

Last October, Boucher opened the biggest sporting goods store in Canada in Ivanhoe Cambridge’s Laurier Quebec in Quebec City, an 83,500-square-foot store in a space previously occupied by Sears. The opening was the biggest in Sport Chek and Sports Experts history in Canada in traffic and volume.

“I came across lots of people who said the store made no sense,” Boucher said. “For those who thought brick and mortar is dead, it’s far from being dead.”

Bricks and mortar will remain at the heart of retail, but customers want more choice and the omni-channel route “is definitely the way to go.”

Eighteen months ago, 71 per cent of Boucher’s clients went online before going to a store.

“You can’t serve customers the same way,” he said. “Clients are much better informed and want to spend less time in stores. Clients arrive knowing the product well and are very rushed. It’s a significant challenge.”

People in Quebec City now shop with the web, added Donald Larose, vice-president, Quebec region at JLL. “They know what they want before they enter the store,” he agreed, noting less time is spent shopping than in 2019, but conversion rates are higher.

Boucher noted there is a trend toward neighbourhood retail with local products and “shopping centres are well-positioned for this.”

The retail mantra: Adapt or die

Retailers are at a crossroads and will be swallowed up if they don’t adapt. However, shopping centre owners must provide more leadership, he said, decrying the fact there are stores that haven’t been renovated for 15 or 20 years, and stores where fitting rooms closed during the pandemic have yet to reopen.

Many developers have expressed concern the tramway will make it harder for cars to access shopping centres on busy Laurier Blvd., the city’s major commercial artery. Current plans call for a sharing of the boulevard between cars, the tramway, pedestrians and cyclists. “We’re continuing to send the message to the authorities.”

As proof, Westcliff recently invested $30 million in a redevelopment the 49-year-old Les Galeries Chagnon in Lévis, the largest shopping centre on the South Shore of Quebec City.

“It doesn’t bother us that shopping centres are not in favour with investors,” Lapierre said. “We believe in the shopping-centre model.”

However, shopping centre owners have to think outside the box. In other markets, he noted, professional schools, municipal libraries and theatres are among the spaces the company is considering.

“As we emerge from the pandemic, we see there’s starting to be demand for our commercial spaces. The interest is there; the traffic is there.”

Steve McLean Residential REITs Toronto / GTA Apr. 11 2022
D
Danny Kucharsky Business reporter
Danny is a multiple award-winning journalist based in Montreal, who has written for about 75 magazines and newspapers in Canada and the U.S. His credits include The Globe and Mail, Montreal Gazette, Maclean's, Chicago Tribune and a wide variety of business, specialized trade and medical magazines. Danny was also the Montreal correspondent for Marketing Magazine for several years.