Soneil Investments has made its largest-ever industrial acquisition, a six-building, $73-million... 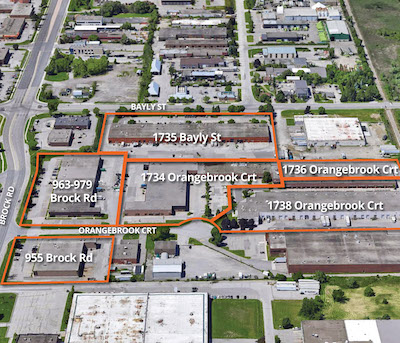 Soneil Investments has made its largest-ever industrial acquisition, a six-building, $73-million portfolio in Pickering in the eastern portion of the Greater Toronto Area (GTA).

This sudden spurt of “very rapid growth” is the product of two decades of groundwork, CEO Neil Jain told RENX.

“I would say that my dad laid a very strong foundation, especially on the industrial side, that has allowed us to really grow in these last three or four years,” Jain said. His father Sach Jain, who remains the company chairman, founded what grew into Soneil during the 1990s.

The Pickering properties surround Orangebrook Court, which runs off of the busy Brock Road corridor. Neil Jain said bidding for the property and the 370,000 square feet of buildings was “very competitive.”

“You know how much money and investment (is going) into industrial right now,” he said. “Finding good industrial that has some added value to it — our company is all about adding value — is a little bit like finding a needle in a haystack.

“The property is at least 20 to 25 per cent below market rent so there is tremendous added value on that side. There is almost 22 acres of contiguous land, which in the Pickering area has huge long-term value on the development side as well, with Durham Live and all the different levels of investments going on in Pickering and the Durham Region.”

The small- and mid-bay properties are more than 99 per cent occupied by 56 tenants. Unit sizes range from below 1,000 square feet to about 30,000 square feet.

Jain said the vendor was also a family owner: “The vendor has put a lot of cap ex into all of them to maintain them very well. They all show very well.”

Jain said his father Sach founded the real estate business as “an income supplement” while he concentrated on building his other firm, Soneil Electronics.

Soneil Electronics constructs batteries and charging systems for a variety of uses including wheelchairs, vehicles such as golf carts and other goods. Soneil Electronics, which conducts its design work in Canada but manufactures in Southeast Asia for shipment mainly to Europe and the U.S., was still in startup mode at that time.

Jain bought homes and rented them out, then slowly began to expand into industrial and other commercial properties. At that time the industrial side of things lacked the “sex appeal” it has gained in a world of e-commerce and last-mile logistics.

“Now that industrial has come to where it is now, that’s where we can owe a lot of the appreciation to our portfolio. So he looks like a bit of a genius whether or not he intended it to be that way.”

The increase in value of those assets, in turn, is helping to finance the new additions.

“A lot of our growth is really owed to the way we add value to assets and the way we generally approach the type of properties we buy,” he said. “We don’t buy stabilized assets because to put it bluntly our cost of equity is much higher than an institution or pension fund or anybody else.

“So if there is a straight six-cap property, chances are it won’t make sense for us because five years down the road it is going to appreciate, but only inflationary, or perhaps a little bit more than that. We have bought buildings over the past three or four years that had vacancy of 25 per cent.

“My first transaction that I worked on I think the property was about 40 per cent vacant and I think we were able to lease-up the whole thing within five or six months – which is one of the advantages we have, because your valuation instantly doubles and we can take a lot of cash out of that property – and invest it into something else.”

Jain said Soneil is focused exclusively on the GTA at this point because of rising property values in the region. It remains bullish on industrial, though as a private company the Jains will also consider contrarian investments.

“We’ve always been bullish on industrial and industrial is having its time in the sun. So we are targeting industrial very heavily, but we don’t have to necessarily pay above what valuation costs are in our opinion to get into industrial,” he said.

“If a great asset like these Pickering ones come to us that’s great, but it doesn’t mean we necessarily stop looking at office, or retail, or for example multires is something we’ve started looking at recently as well.”

Jain said Soneil’s portfolio is comprised mainly of industrial and office assets, with some suburban retail properties as well.

Down the road, the family is considering development, and seeking to attract outside investors. Both are designed to open up new options to Soneil.

“A lot of our existing properties are in very accessible locations along new TTC stops, LRT routes and things like that, so one of the new things we are looking at is doing rezoning on some of those properties to maximize value and then getting into the development side of things whether that be multires, condos or anything like that,” Jain explained.

Attracting outside investment would help the company scale up more rapidly. Jain said self-capitalized companies can reach investment thresholds which are difficult to break through and might not be able to grow as quickly as their experience and expertise might otherwise allow.

“Because we have the core competency within our team, we’d love to grow and be able to use other institutional capital, high-net-worth capital, family office capital to be able to grow this business even further,” he explained, noting the industrial sector is particularly attractive to many investors.

That just happens to be where Soneil has its greatest depth of expertise: “In industrial I don’t think there is a shortage of people trying to get into it, they just don’t have the expertise someone like us does.”