From design to development: Sherry Larjani and Spotlight 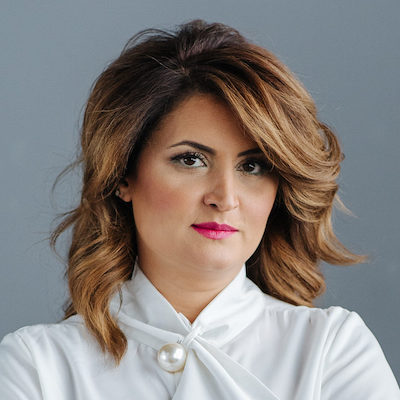 Spotlight Development president Sherry Larjani had worked with two Toronto architectural firms when she realized she wanted to bring her designs to life and get into the development side of the industry.

So, after spending time as a junior architectural designer for Gordon Ridgley Architects and Mesbur + Smith Architects, she decided to start building her own dream. She started with single-family homes and investments from family members and friends before buying her first condominium site, a The Beer Store property at 550 Queen St. E. at the corner of River Street in Toronto.

After canvassing potential partners, some of whom she already knew and others who were cold calls, Liberty Development Corporation came on as a partner for the project.

“In the beginning, it was hard to have a strategy because I was basically like a kid out of school looking for ways to get my foot in the door,” Larjani told RENX. “I had to do it the difficult way. I had to buy a piece of land that was suitable for a condo and then start knocking at doors and asking people to partner with me.”

Spotlight and Liberty are still in talks with the City of Toronto regarding the River and Queen condo, but units went on sale in October and Laranji said she’s “pretty happy with the outcome.”

Partnering has paid off

As the Toronto-based firm has grown, Urban Capital has also become a joint venture partner with Spotlight, including on its highest-profile project, the groundbreaking all-women Reina Condos at The Queensway and Royal York Road in Etobicoke.

They’re also working together on a development site Larjani assembled through house purchases at Marlee Avenue and Lawrence Avenue West. It’s now at the site-planning stage, but Laranji would like to see it launch this spring.

“I got lucky enough that I had a lot of people in the industry who were supportive and willing to partner and willing to collaborate and let me learn from them,” said Larjani. “My partners at Liberty have been amazing in walking me through different sites that I was looking at and telling me what they thought and what their ideas were and if they thought it was suitable or not.”

Larjani prefers to avoid development sites that others are looking at. She enjoys the challenge of tackling less obvious locations and building “something amazing and interesting out of them.”

Spotlight is open to developing throughout the Greater Toronto Area. While most comfortable in the residential sector, Larjani is also interested in mixed-use projects which include commercial and retail elements.

“My ideas and strategies are driven by the location of the project, the needs of the community and how it could impact that area. I’m open to looking at wherever opportunities will take me.”

Larjani said it was difficult to get financing from outside of her family in the company’s early days when she didn’t have much of a development track record. However, more doors have opened up as Spotlight has built a name for itself. She’s now getting incoming calls from potential investors and has worked with a variety of equity partners. 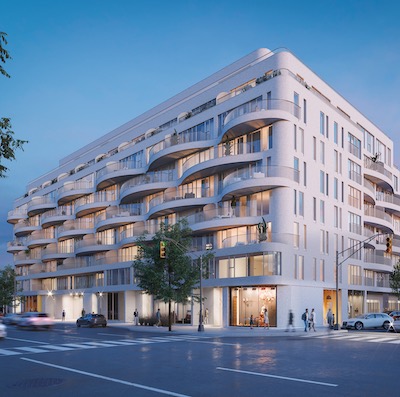 Reina Condos is a groundbreaking project in Toronto, for which all aspects of the project are being led by women. (Courtesy Spotlight Development)

Larjani and Urban Capital development director Taya Cook have broken new ground with Reina Condos, Canada’s first condo designed and developed by an all-women team. Each aspect of the development is being led by women, from architecture to project management, engineering, urban planning, construction management and sales.

The nine-storey, 197-unit building in a residential district called Queensway Village in Etobicoke will have approximately 5,400 square feet of retail space along The Queensway.

Reina Condos will include approximately 150 underground resident parking spots and 29 commercial and visitor parking spaces. It will also include an approximately 6,500-square-foot courtyard with barbecues, seating areas, dining tables and a kids play zone.

There will be executive concierge service and approximately 5,100 square feet of interior amenity space that will include: a gym; a yoga studio; a community room; a playroom for children; a hobby room; a games room; a sharing library; a snack shack; a parcel room; a pet washing station; and stroller parking.

Spotlight has a ravine-view site in Port Hope, with eight buildings constructed between 1853 and 1976 backing on to the Ganaraska River.

It plans to redevelop the site into a community that could potentially include a retirement residence, a European-style walk-through market, a craft brewery and live-work and loft condo units. RAW Design is the architect for the project, which is still in its early stages.

Barry Bryan Associates is the architect for an affordable purpose-built rental apartment for seniors in Ajax. It’s at the site-planning stage and it’s hoped construction will start by the fall.

“We’re focused on building affordable units, but also a building that’s designed for healthy living,” said Larjani, who wants sustainability and wellness elements and designations for all future Spotlight developments.

Cartier Condos, at Cartier Crescent and Bayview Avenue in Richmond Hill, will feature a mid-rise building with a green roof from RAW Design. The condo will be in a park-like setting that can be accessed by other neighbourhood residents.

Development charges for the project will go to the City of Richmond Hill to improve neighbourhood infrastructure, which has had issues with sewage system flooding. Cartier Condos is going through the approvals process and it’s hoped the project will launch late this year.

“You have to jump through so many hoops with the different municipalities and different planning departments and convincing them that your idea and vision is something that’s suitable for the area,” said Larjani.

“Every day is a challenge.”

Steve McLean Residential Transactions Toronto / GTA Mar. 23 2021
Steve McLean Business reporter
Steve is a veteran writer, reporter, editor and communications specialist whose work has appeared in a wide variety of print and online outlets. He’s the author of the book Hot Canadian Bands and has taught reporting to college students. He is based in Toronto.