TD Bank Group is taking a 30 per cent ownership stake in 160 Front Street West and will occupy 84... 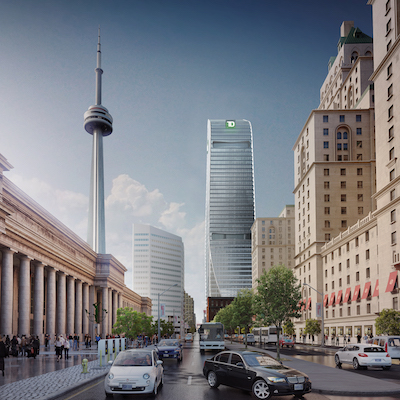 The 160 Front Street West office tower being constructed in Toronto by Cadillac Fairview. TD Bank, whose branding is shown at the top of this rendering, will be the anchor tenant and is buying an interest in the project. (Courtesy Cadillac Fairview)

TD Bank Group is taking a 30 per cent ownership stake in 160 Front Street West and will occupy 840,000 square feet over 33 floors of the downtown Toronto office building.

Cadillac Fairview will own 50 per cent of the building and Investment Management Corporation of Ontario (IMCO) will own 20 per cent. Ontario Teachers’ Pension Plan previously pre-leased 340,000 square feet in the now fully leased 46-storey building, which is valued at approximately $760 million.

“We did not set out with any expectations with respect to people wanting an ownership stake in the building,” Cadillac Fairview executive vice-president of development Wayne Barwise told RENX in an interview Thursday, just after the transaction was announced.

“With the strength of the market, we were quite happy to own the building ourselves. It speaks to the strong office market and TD’s strong belief in first-class office space and how it impacts their people and talent attraction and retention.”

The building is designed by Adrian Smith + Gordon Gill Architecture in collaboration with B+H Architects. Excavation of the site will begin in May and 160 Front Street West is slated to open in the fall of 2022.

The tower is designed to achieve LEED Platinum and WELL Building Standard certifications. Once operational, 160 Front Street West will be subject to the standards of Cadillac Fairview’s award-winning Green at Work sustainability program.

The building is in close proximity to the Union Station transit hub and will include 339 parking stalls and 492 bicycle stalls.

“They’re looking to come into a building that will have one of the highest sustainability ratings, and they’re looking for a new home for their employees which is open and flexible and is located in close proximity to transit and other amenities,” said Barwise of what the tenants will be getting.

In addition to offices, 160 Front Street West will include 12,290 square feet of commercial space. TD will have a bank branch on the ground floor of the building and Barwise said there will also be a couple of small food and beverage retailers that haven’t been confirmed yet.

Barwise said TD will have signage on 160 Front Street West and is in discussions to participate in its branding.

Cadillac Fairview also owns the nearby Toronto-Dominion Centre, which opened in 1967 at the intersection of King and Bay streets.

“Closing out our leasing efforts with our long-standing partner, TD is a significant occasion for our two companies,” Barwise said in an earlier release announcing the transaction. “Together, in 1967 CF and TD took a bet on the Toronto skyline with the opening of Toronto-Dominion Centre, forever changing the intersection of King and Bay Streets.

“I’m thrilled that over 50 years later we continue to collaborate, grow and innovate together.”

TD has also played a role in the design and construction of the interior workspaces and employee environments.

“It’s not every day that an organization has the chance to design, from the ground up, a new kind of workplace,” said Paul Whitehead, the senior vice-president of enterprise real estate for TD, in the release. “The tower at 160 Front Street West will create a free-range, open-concept campus experience, and reimagine the work experience for our colleagues.

“This is a key part of our GTA real estate strategy to transform the way our employees work, and updates to support this are already underway at many of our locations in downtown Toronto, including our flagship TD Centre.”

Cadillac Fairview currently has $1.5 billion of major office projects under development, including three other projects in downtown Toronto. These include: the $479-million 16 York, which is a joint project with IMCO; the fully leased, $200-million BMO campus at CF Toronto Eaton Centre; and the $60-million revitalization of 2 Queen Street West, for which leasing discussions are underway.

HSBC and a couple of unnamed technology companies have committed to 16 York, which is 50 per cent pre-leased. Barwise said negotiations are underway with other tenants which could increase that number to 80 per cent.

Construction of the 340,000-square-foot space above Nordstrom in CF Toronto Eaton Centre is underway and it’s expected to be turned over to BMO in January. It should take a year for the company to complete the interior finishing.

“It’s a great market for growth so we have a few things in the pipeline that we’re working on that we’re not at liberty to discuss any details about yet,” Barwise said of Cadillac Fairview’s future Toronto development plans.

Cadillac Fairview is also going through the municipal entitlement process for a 350,000-square-foot office building in Vancouver.

Cadillac Fairview is one of the largest owners, operators and developers of office, retail and mixed-use properties in North America. Its real estate portfolio also includes investments in retail, mixed-use and industrial real estate in Brazil, Colombia and Mexico.

IMCO manages a $61.6-billion portfolio that spans multiple asset classes and value-add strategies that are designed to meet the important financial objectives of public sector clients in Ontario. IMCO’s mandate is to provide broader public-sector institutions with investment management services, including portfolio construction advice, better access to a diverse range of asset classes and sophisticated risk management capabilities. IMCO is an independent organization that operates at arm’s length from government.