The partners at Ottawa’s massive Zibi development have announced a five-year plan to construct an... 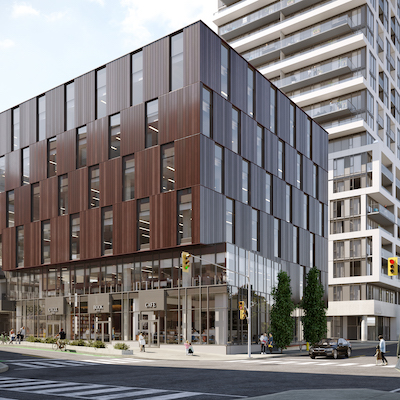 The partners at Ottawa’s massive Zibi development have announced a five-year plan to construct an additional 210,000 square feet of office space in three buildings at the site, which straddles the Ottawa River between the National Capital and the Quebec city of Gatineau.

The announcement Thursday morning does not include a firm timeline for the developments, but the first is expected to begin construction within a few months. The new buildings would bring the site to about 400,000 square feet of office space.

The new announcement involves three additional structures at the 34-acre mixed-use site, which includes both shorelines and several large islands within the Ottawa River:

– a four-storey brick-and-beam commercial building on Albert Island with 30,000 square of office space.

Of the retail space, about 22,000 square feet in the Gatineau building are being designed for a grocery-related tenancy.

A Zibi spokesperson told RENX the Chaudière Island West will be constructed on spec, but no other leasing information was immediately available. The partners “are not partial to private or public sector tenancies and would gladly welcome both,” they said in an email exchange.

Like all of Zibi, the new spaces will be carbon-free and “climate resilient,” the partners say, designed to meet the Government of Canada’s Greening Government Strategy goals.

“The pandemic has sparked much discussion and debate about the future of work and cities, but experts agree there will be demand for a new kind of workspace after the pandemic,” said Gordon Wadley, COO at Dream Office REIT, in the announcement.

“As we plan for the return to the workplace, Zibi is fully committed to creating welcoming office spaces that meet the evolving needs of employers and promote the health and well-being of workers as well as offer an increased focus on common spaces and collaboration.”

Zibi is a One Planet Living-endorsed community, adhering to all 10 principles of the framework developed by Bioregional and the World Wildlife Fund, from eliminating GHG-emitting energy sources to promoting sustainable transportation and encouraging social equity.

Late in 2020, the Government of Canada announced a target of 75 per cent of its domestic new lease or renewed lease space to be in net-zero, climate-resilient buildings.

Zibi’s Community Utility is a district energy system utilizing energy recovery from effluents from Kruger Products’ adjacent Gatineau manufacturing facility for heating and the Ottawa River for cooling. It will allow Zibi’s residential and commercial buildings to emit zero carbon for heating and cooling.

All of Zibi’s commercial buildings will include state-of-the-art amenities including keyless entry and advanced air circulation. Dream is also committed to implementing the principles outlined in the POSTpromise, which aims to support businesses as they put in place safety measures to help prevent the spread of COVID-19.

The Zibi site includes views of Chaudière Falls and nearby Parliament Hill, eight acres of waterfront parks and public spaces. 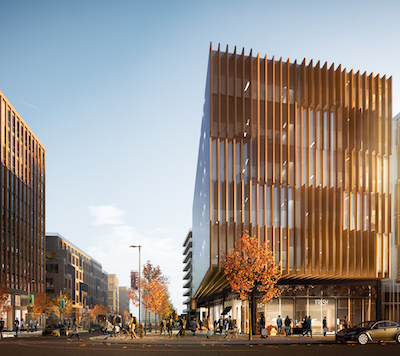 Rendering of a six-storey commercial building (right) at the Rue Laurier and Rue Jos-Montferrand intersection in Gatineau, with ground-floor retail and 120,000 square feet of office space. The building is to be constructed at the Zibi development. (Courtesy Zibi)

The community is located along bus routes serving both Ottawa and Gatineau, with the Ottawa LRT and the future Gatineau Tramway a few steps away, and access to multi-use pathways on both sides of the river.

In addition, 20 per cent of Zibi’s parking stalls will be equipped with electric vehicle charging stations.

“Zibi is fully committed to being a leader and steward of sustainability in the region. As such, we were always planning to build a new kind of community focused on people’s happiness and the planet’s welfare,” Wadley said in the release.

“Now that we see a light at the end of the tunnel when it comes to the pandemic and the region’s economy, we are looking forward to becoming home not just to our residents, but to employers and workers from all over the National Capital Region.”

At full build-out, Zibi will be home to more than 5,000 residents and provide job spaces for 6,000 workers. In will include eight acres of riverside parks and public squares and more than one million square feet of commercial space.

Several buildings are already completed or under construction at the site providing homes, employment and retail spaces.

About Dream and Theia Partners

Dream is one of Canada’s leading real estate companies with approximately $10 billion of assets under management in North America and Europe.

Ottawa-based Theia Partners is a development agency dedicated to health, wellness and sustainability in each of its projects. Theia and its partners have been instrumental in developing several of Canada’s first LEED Platinum buildings across Canada.