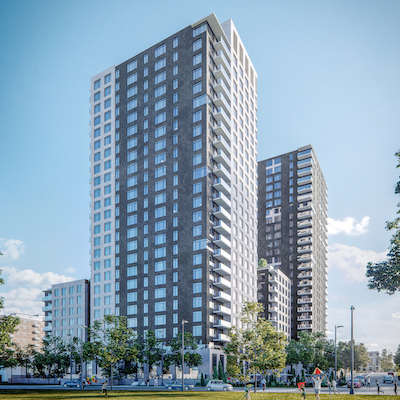 LaSalle’s LCPF has acquired an interest in the two-tower Rideau & Chapel multifamily development at the edge of downtown Ottawa. (Courtesy LaSalle)

Managers of the LCPF, which has outperformed the MSCI/REALPAC Canada Quarterly Property Index through its first three years, say they are planning more acquisitions. LaSalle Canada chief executive officer John McKinlay told RENX he expects the fund to top $1.5 billion by the end of the year.

The open-end core fund targets income-oriented properties in Canada’s major markets with financial commitments from Canadian and global institutional investors. It seeks to take advantage of mispriced assets and its diverse portfolio is comprised of office, industrial, mixed-use, multifamily and retail assets.

Less than six per cent of the LCPF is invested in retail properties, which has been part of its success considering how that asset class has recently lagged behind others — especially since the pandemic began a year ago.

The LCPF purchased a 47.5 per cent stake in the Rideau & Chapel multifamily development in Ottawa for an undisclosed price. The project is being developed in partnership with Hazelview Investments and Trinity Development Group, with Trinity acting as development manager.

McKinlay said the off-market deal resulted from a relationship between LaSalle head of acquisitions Stephen Robertson and Hazelview. The property fits well into the LCPF’s mandate, the firm likes the Ottawa market and that specific location, and it has high regard for Trinity and Hazelview as partners, he added.

The project comprises a 25-storey, 315-unit rental apartment with entitlements permitting the future construction of a second tower with an additional 318 units.

The property is located on the eastern edge of the financial business district near the CF Rideau Centre, the University of Ottawa, the Fairmont Chateau Laurier hotel, the Rideau Canal, Parliament Hill and the Rideau light rail transit station.

Rideau & Chapel’s first phase is expected to be delivered in early 2023.

“The market’s a little opaque right now, so we’ll want a little more clarity over the next two years in terms of the start of the next phase,” said McKinlay. “But we’re very bullish over the long term. It’s just about getting the timing right so the two projects don’t overlap and cannibalize each other in any way.”

Rideau & Chapel will also have approximately 9,500 square feet of retail space at grade. Leasing efforts for that space haven’t yet begun. 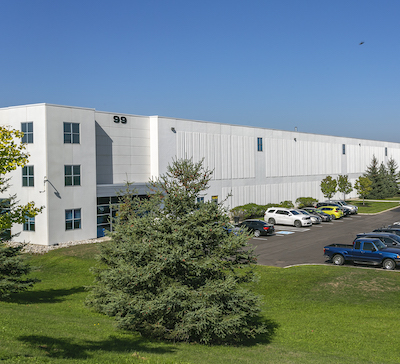 The LCPF also closed the acquisition of a 527,568-square-foot, 30-foot clear height, fully leased distribution centre at 99 Savannah Oaks Dr. in Brantford for an undisclosed price from GWL Realty Advisors.

The building opened in 2006 and has one drive-in shipping door, more than 80 loading docks and a secure parking lot for trailers. Procter & Gamble is the lead tenant and there are three other smaller tenants.

The property benefits from the strong demand of the Greater Toronto Area (GTA) industrial market that has driven growth to peripheral markets. Brantford is about 100 kilometres west of Toronto, along the Highway 403 corridor.

“It’s a highly functional, quality, well-located industrial building with great access to the highway system on the west side of the GTA,” said McKinlay.

“The industrial tentacles have been spreading out for a while to Meadowvale, Milton, Kitchener-Waterloo, Guelph and Hamilton, and we really feel like Brantford is next.”

McKinlay said pricing in Brantford was 175-plus basis points lower than for Toronto industrial properties and the price for the new property was less than $100 per square foot. It also has below-market rents and relatively short remaining lease terms, which he found attractive.

“I believe rents are growing and accelerating, and I like to have line of sight in terms of capturing those accelerating rents as opposed to making a passive bet on rent growth for the next 10 years,” said McKinlay.

“The value enhancement is clearly taking a core building and availing ourselves of the tenant depth that we’re seeing, and the rent increases.”

Future plans for the LCPF

While last year wasn’t a strong capital-raising year for LaSalle Canada, McKinlay said he’s pleased with its current position. The LCPF has about $550 million in equity to put to work and a very active off-market pipeline, he added.

“We’re really seeing a lot of interest from core capital picking up this year,” said McKinlay. “We still want to keep up with our history of putting that capital to work quickly, so we’re lining up all of the dominoes in a disciplined manner and we’re seeing a lot more international capital focusing in on Canada.”

McKinlay would like the LCPF to acquire more properties in Montreal and Vancouver.

“Montreal should be easy to figure out and Vancouver less so because it’s always pretty much the most desirable and lowest-returning market, which could potentially dilute income returns. We’re very focused on delivering higher income returns, so we’ll have to get creative on that front.”

There’s interest in urban mixed-use properties with a blend of different asset classes, as well as such niche assets as self-storage, student housing and data centre properties.

“I believe there’s space in those sectors to diversify our fund beyond the four food groups,” said McKinlay.

LaSalle Canada has executed more than $6.6 billion in Canadian real estate deals since 2000 and has 9.2 million square feet of assets valued at $2.1 billion under management.

Don Wilcox Commercial Development Ontario Jan. 18 2021
Steve McLean Business reporter
Steve is a veteran writer, reporter, editor and communications specialist whose work has appeared in a wide variety of print and online outlets. He’s the author of the book Hot Canadian Bands and has taught reporting to college students. He is based in Toronto.