Toronto had 125 cranes actively working on multiresidential towers in March, according to the RLB... 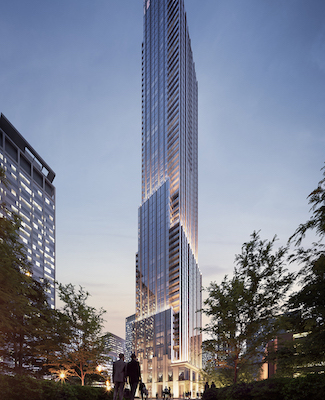 Toronto had 125 cranes actively working on multiresidential towers in March, according to the RLB Crane Index, dwarfing the total of any other North American city.

“The urban density story for our city has clearly not stalled during the pandemic,” Terry Olynyk, president and managing director of Multiplex in Canada, said in introducing a recent webinar presented by Urban Land Institute Toronto chapter.

Multiplex, an international construction contractor founded in Australia in 1962 and owned by Brookfield Asset Management, was the lead sponsor of the event that looked at the role and future of multiresidential towers in Toronto.

They spoke about their current major projects and answered Player’s questions about the high-rise market.

Metropia vice-president of sales, marketing and design Lee Koutsaris spoke about 11YV, a condominium it’s developing in partnership with RioCan Living and Capital Developments near Yorkville Avenue and Yonge Street.

The 62-storey, 593-unit tower will have 81 rental replacement units, including 20 offering affordable rents.

It will have 43,000 square feet of retail space at the bottom and a new mid-block park connecting Yorkville Avenue and Cumberland Street is part of the project.

It will have 16,521 square feet of indoor amenities, including a swimming pool, a wine-tasting room, a fitness studio, a family area, a theatre, a business centre, a lounge and a piano bar. There will also be 8,353 square feet of outdoor amenities on a third-floor outdoor terrace.

Sales for 11YV launched in the fall of 2019 and continued through the pandemic, and only a handful of suites are still available. Any concerns about living in high-rise towers brought about by COVID-19 should be gone by the time they’re ready for occupancy in five years, according to Koutsaris.

“We have not seen any major shifts or changes in demand for suite sizes or bedroom types,” she said. “The demand for quality, well-designed units in tall buildings has remained.”

However, developers are now looking at more flexible designs and incorporating home office and study areas into units or amenity spaces. Balconies, outdoor amenities and access to fresh air have also become a growing consideration.

Koutaris said there has been an increase in demand for units to accommodate multi-generational families, where older parents move in with their adult children.

Koutsaris also emphasized the importance of recognizing the role developers play in promoting inclusivity within the built environment.

She talked about how Metropia and Context have created a $3.5-million fund for Toronto Community Housing (TCHC) residents to provide scholarships and training programs to help them become tradespeople and get jobs on construction sites as part of their The New Lawrence Heights development.

In conjunction with their AYC development at 181 Bedford Rd., Koutsaris said Metropia and DiamondCorp have created a social equity fund for residents of a TCHC building at 250 Davenport to help them apply for scholarships and training programs. 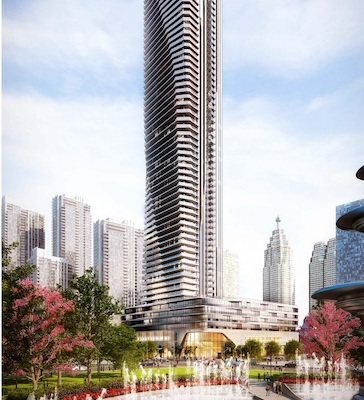 Pinnacle International sales and marketing VP Anson Kwok spoke about The Prestige At Pinnacle One Yonge, which will eventually feature multiresidential towers of 65, 80 and 95 storeys and 80,000 square feet of indoor and outdoor amenities for residents.

“We have to design buildings in a timeless way,” said Kwok. “We spend a lot of time on layouts and I think it’s important for us to have something that works for everyone.”

Kwok is also seeing more multi-generational purchases, including families buying all four corner units of a floor in a condo in order to be close to each other without living together.

Kwok said Torontonians love towers and appreciate there are plenty of new ones being built in different heights and styles. They also appreciate what these tall buildings are generally surrounded by, he added.

“A really key component of living in an urban community is all the amenities that are around you, not just the ones that you’re building and providing to your local community, whether it’s parks, community centres, schools, great restaurants or great retail within walking distance.”

A certain number of unit pre-sales are usually needed to launch a condo project. Pinnacle originated in Vancouver, where Kwok said units are generally bigger than in Toronto, and the company has tried to carry that over as much as possible in Ontario’s capital.

“That doesn’t always correlate to the financing model that we have in the city, so we’re forced to be patient on those units and sell the smaller units at the beginning.”

The 47-storey condo will have 383 residential units and rise from its square base with retail space to a 16-sided circular tower with balconies and large terraces. More than 80 per cent of the building has an outdoor space and the adjacent Delisle Park will be expanded by 50 per cent as part of the project.

“It’s about livability within the actual building and the residences, but it’s also about thinking of the broader urban context and how this project fits in with that,” said Donnelly.

Slate hasn’t begun leasing One Delisle’s retail component, but Donnelly said there will be food and beverage options, including patios.

“Our plan is to own the retail here forever. It’s all about curating the right experience in this node with a long-term view on it.”

One Delisle will also have approximately 20,000 square feet of private amenities, including a fitness centre, a wellness spa and a wine and cocktail lounge.

Slate has been working on the project, which will launch this spring, for more than four years.

“It’s really part of a broader city-building and place-making effort,” said Donnelly. “We have been investing in the Yonge and St. Clair neighbourhood since 2013.

“We own 10 buildings, including all four corners, and since 2013 we’ve been working on everything from large-scale public art to streetscape improvements to new retail, investing in existing office buildings and renovating them.”

Slate’s extensive ownership in the area has allowed it to do more than it would have been able to do had One Delisle been merely a one-off development, according to Donnelly. This includes doubling the width of sidewalks surrounding the project.

The pandemic brought on an aura of pessimism about people wanting to live in towers in major cities, but Donnelly said that’s already turned around.

“Cities are incredibly resilient and tall buildings form part of that,” said Donnelly. “Cities have always bounced back and the reality is that we are incredibly social beings.

“We also realize that we are more productive and more innovative when we cluster together.”

Steve McLean Residential Development Ontario Apr. 26 2021
Steve McLean Business reporter
Steve is a veteran writer, reporter, editor and communications specialist whose work has appeared in a wide variety of print and online outlets. He’s the author of the book Hot Canadian Bands and has taught reporting to college students. He is based in Toronto.