The 1.5-million-square-foot second tower at the CIBC Square development in downtown Toronto has b... 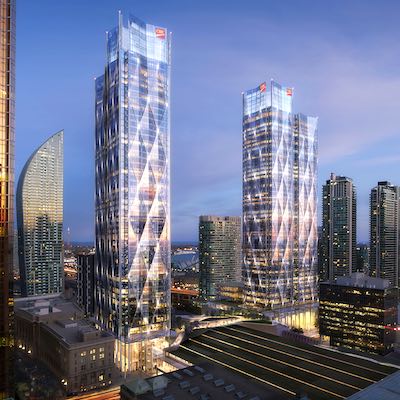 The 1.5-million-square-foot second tower at the CIBC Square development in downtown Toronto has broken ground and is scheduled for completion in 2024.

The 50-storey tower at 141 Bay St. will complement the first tower, a 49-storey building which is currently in the final phases of construction and scheduled to open its doors later this year. It is a joint venture between Ivanhoé Cambridge and Hines.

“Phase One, 81 Bay Street has brought our vision of a city-defining office complex for human-centred services and sustainable design solutions to life, all to deliver the highest tenant experience,” said Jonathan Pearce, Ivanhoé Cambridge’s executive vice-president of leasing and development, office and industrial, North America, in the announcement Wednesday morning.

“We are excited to see 141 Bay Street further define the future of office experience for tenant partners and the community.”

Although construction of the second tower launches at a time of higher vacancy and some uncertainty for the office market due to the ongoing effects of the COVID-19 pandemic, the complex is already significantly pre-leased. Four of its largest committed tenants alone have leased 2.2 million square feet of the three-million-square-foot towers (anchor tenant CIBC, AGF, Boston Consulting and Microsoft).

The CIBC Square towers are designed with an extensive amenity package and distinctive features including a one-acre elevated park which will link the two towers. It will span one of North America’s busiest railway corridors, connecting the two buildings at the 4th floor.

“The second tower at 141 Bay Street, in particular, has been designed to elevate the human experience through health and wellness. The building’s green areas, spacious one-acre park, enhanced air quality and thoughtfully appointed amenities reflect a commitment to one’s health, safety and security,” said Avi Tesciuba, Hines Canada country head, in the release.

The project was designed by architect firms WilkinsonEyre (its first project in Toronto) and Adamson Associates.

Among CIBC Square’s other features will be Toronto’s latest food hall, which is set to open in late 2021 in Tower 1. Construction of Phase 2 also allows for completion of PATH connections to Union Station and East of Esplanade through the Backstage Condominium component.

“141 Bay Street is set to seamlessly complement 81 Bay Street and our overall goal of creating a next-generation environment that will elevate all of the city’s offerings while setting a tone for the future,” said David Hoffman, general manager at CIBC Square, in the release.

“The building is being engineered to LEED platinum standards and is pursuing WELL Building Standard certification and will connect the city to a new international standard of office.”

About Ivanhoé Cambridge and Hines

Ivanhoé Cambridge develops and invests in real estate properties, projects and companies in cities around the world.

Through subsidiaries and partnerships, it holds interests in more than 1,100 buildings, primarily in the industrial and logistics, office, residential and retail sectors.

Ivanhoé Cambridge held close to $60.4 billion in real estate assets as of Dec. 31, 2020, and is a real estate subsidiary of the Caisse de dépôt et placement du Québec, one of Canada’s leading institutional fund managers.

Hines is a privately owned global real estate investment firm founded in 1957 with a presence in 225 cities in 25 countries.

Since the launch of its Canadian operations in 2004, Hines has developed, acquired and/or managed over 13 million square feet of signature projects representing a wide variety of product types. It has offices in Toronto, Calgary and Edmonton and over 97 employees.