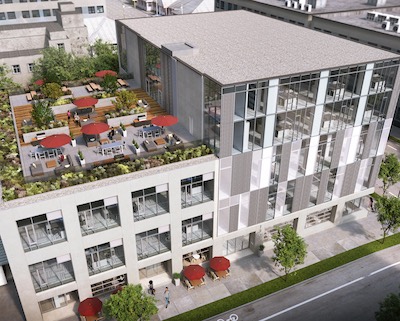 Michael Chiang, founder of the three-year-old development company, says the boutique strata building is named after its address, 1308 Adanac. It gives owner-occupiers and investors the opportunity to buy into a market that shows all signs of growing.

With a premium on central land and increased demand during the past couple of years for centrally located light industrial, the appeal for owners of the units is that they will grow equity instead of paying increasing lease rates.

CBRE launched presales in early March and has sold the two top floors of office space to a daycare and daycare training facility.

The remaining nine units of industrial are on the market for $675 to $775 per square foot, depending on the unit. Units are configurable in the 30,905-square-foot building, but most will likely cater to those needing 2,000 to 3,000 square feet.

In an email, Chiang said that due to geographic constraints, more businesses are finding “a more nimble footprint within city limits,” while also finding spaces for bulk storage and distribution needs outside the city. As a relatively new product, stacked industrial serves the small- to mid-size user.

“Industrial strata pricing as a whole is primarily driven by land acquisition and construction costs — both of which have seen significant increases in the last 12 months, so we expect pricing for end units to continue to rise as well for the foreseeable future.”

Jordan Coulter, CBRE sales associate for the industrial properties group, said the Grandview-Woodland submarket is different from nearby Mount Pleasant to the west, which is anchored by a four-city-block tech campus currently under construction.

The five-storey building will be two-thirds industrial and one-third office when it’s complete by 2022. The two levels of office, which count as a single unit, had been acquired prior to launch so there was no need to market the space.

“We are kind of tapping into this emerging market at a price where those Mount Pleasant developments were two to three years ago,” Coulter said. “We have had success on the office side and we have rolled out the remaining units, which are all I-2 zoned. And we have had a ton of interest so far.”

The site, which has views of the Northshore Mountains, used to be home to a taxi company.

Once complete, the third floor will have spectacular views, with 15-foot-high, floor-to-ceiling windows. The ground level will likely be taken up by a business that requires both retail and production, such as a bakery or coffee roaster.

That level will include a mezzanine, which is why the level one floor above is considered the third floor.

The product type attracts small users such as local niche businesses which want to stay within the urban core, said Coulter. However, they would consider a single large tenant, if one should come along.

The building is scheduled for completion in Q2 2022.

Construction of the underground parking is underway, and Coulter said once they get to street level, people are going to appreciate the scale and understand the streetscape. He expects interest to grow as construction progresses.

“This is one of those markets where developers are testing the waters and we are certainly confident the demand is there,” he said. “It’s one of those things where people are going to want to touch and feel and see it.”

The Grandview-Woodland neighbourhood includes trendy Commercial Drive and the area has a number of breweries with sidewalk seating areas, so it’s already rich with significant amenities.

The I-2 zoning fits tech uses as well as light industrial uses, so it will likely attract some interest from the city’s growing tech industry.

It will also offer a more competitive rate than Mount Pleasant and downtown.

Nearby Ironworks a major success

One of the few comparables in the area is the two-building, three-storey Ironworks, on Franklin and Pandora Streets, separated by a mews. That office/industrial strata complex, however, is larger and includes more loading bays.

The concept is the same, but the scale is much smaller than Ironworks, said Coulter.

And PC Urban, which is already well established in vertical industrial, is continuing the concept with Evolution Block, a 104,000-square-foot office/industrial strata building at 1055 Vernon Dr. That project however, is further west in False Creek Flats.

Chiang added that unlike other projects, his building has the benefit of facing onto busy Clark Drive, giving it more exposure. It will be one of the first new developments on Clark, which has many old buildings and is a thoroughfare for trucks passing through the city from the port terminal.

“Industrial intensification projects such as 1308 Adanac are the solution for attracting highly skilled jobs to our neighbourhoods moving forward,” Chiang said.

“We haven’t seen a decline in strata values in any of the neighbourhoods of Vancouver,” said Coulter.

He said he can’t speak for office, but in the industrial sector it’s been a boom year, particularly for acreage outside the city.

Those properties are seeing 10 or 20 parties taking tours and making multiple offers, with interest coming from developers and end-users.

“It’s been white hot for the last six months. Similar to what we’ve seen in the residential, we are seeing multiple offers on buildings, multiple offers on strata, especially if they are existing and ready for use,” said Coulter.

“It’s been an unexpected boom. Nobody could expect much in the last two years, but this has been one of those years where it has gone in a pretty positive direction for the industrial sector.”