With borders expected to fully reopen in the coming months and an office market expected to pick... 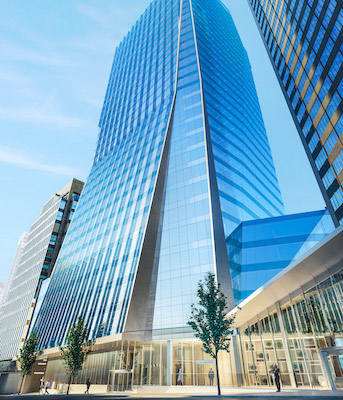 The Vancouver Centre II office tower will be the first to open among the coming wave of new office properties in the city’s downtown area. (Courtesy GWL Realty Advisors)

With borders expected to fully reopen in the coming months and an office market expected to pick up again, Geoff Heu is grateful his firm’s new Vancouver Centre II office tower is one of the first out of the gate.

“In that wave of development we will be the first to complete,” said Heu, vice-president, development for GWL Realty Advisors, Western Canada. “We’re ahead of the Canada Post building and Bentall at 1090, and we will be one of the first buildings ready for occupancy when the pandemic ends this fall — fingers crossed.

“Pre-pandemic we were very happy, because you have a lineup of tenants and you want to be the first building to deliver. So, of the buildings currently under construction, we are one of the first. We are well-positioned. Tenants can be moving in to build out their office space around the end of the year. The timing is good.”

There is an estimated 3.5 million square feet of office space under construction in the downtown peninsula. Like the GWLRA project, most developments were announced in the last three or four years, including QuadReal‘s 1.3-million-square-foot The Post building at the former Canada Post headquarters on W. Georgia, and BentallGreenOak‘s 33-storey, 562,000-square-foot Bentall 6 tower at 1090 W. Pender St.

“At this stage, we are happy with the progress. . . . I mean, admittedly, it’s been quieter during the pandemic, of course.”

The project has the bonus of an underground link with two SkyTrain lines, making it one of the most transit-oriented downtown towers.

It is developed by GWLRA, on behalf of the Healthcare of Ontario Pension Plan and The Canada Life Assurance Company.

“At that time, the office market was very healthy, it was on fire,” said Heu. “Rents moved up from the $40s and $50s (per square foot) and higher. There was continued demand, especially from the tech sector.

“Now it’s been quieter on the leasing front. The border has been shut down.

“Initially, when (the pandemic) first started, there was a lot of, ‘Geez, what’s the future of office? Is everybody going to work from home forever?’ ”

The extended wave of COVID cases hasn’t helped the situation, but Heu said the confidence is still there. He has heard from real estate brokers that many U.S. companies have been eagerly waiting to cross the border to take real estate tours.

Vancouver Centre represents the company’s belief the city’s core business district is shifting eastward, developing a tech ecosystem anchored by the arrival of major companies such as Amazon. The e-commerce giant has leased the entire 1.1 million square feet that makes up The Post, a heritage podium building with two towers.

The institutional investment company is pushing even further east with another project by the Main Street SkyTrain station, where it purchased a site — during the pandemic — for a major new office building.

Once it went on the market, there was significant interest in the transit-oriented property, which is also close to the $2 billion St. Paul’s Hospital relocation set to complete in 2026.

It is within walking distance to the Mount Pleasant tech hub, which has significant projects under development.

“There were multiple offers through the CBRE guys, and it was competitive, and during a pandemic too,” said Heu. “We have long-term confidence in the market in that location, especially with the St. Paul’s Hospital and the SkyTrain.

“It’s so close to downtown and Olympic Village, and it’s highly amenitized, and the Broadway line is coming through there. It was attractive.”

He was especially pleased to see the Electronic Arts deal at the former MEC building, announced in late July. The video gaming giant leased the 120,000-square-foot, four-storey building at 1077 Great Northern Way, also close to the Mount Pleasant tech hub.

“That was like, ‘Wow. They are taking the whole building.’ We are very happy about that because it endorses the area. And we feel the whole downtown is moving eastward because there is more land, right? So that was a big deal.”

False Creek Station is currently in pre-leasing mode and Heu expects a 36-month build out. Although local companies are actively leasing, there is still some anticipation for the American companies to get back into the market.

“We have interest, but we think it will really begin when the pandemic clears up and the borders are open and people are truly back to work and the corporate tech community is back across the border,” said Heu.