UPDATED WITH CEO INTERVIEW: Harden is expanding into industrial development and has a heavyweight... 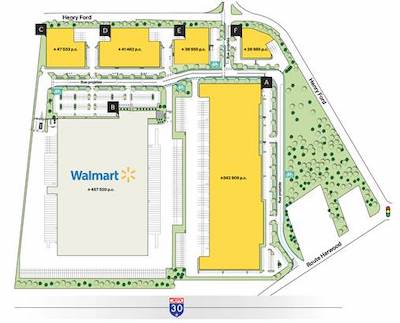 Harden and Walmart will construct a 457,000-square-foot fulfillment centre in Vaudreuil-Dorion in Greater Montreal. (Courtesy Harden)

UPDATED WITH CEO INTERVIEW: Harden is expanding into industrial development and has a heavyweight tenant, Walmart Canada, for its initial project in the Greater Montreal city of Vaudreuil-Dorion.

The Montreal real estate investor, builder and operator will construct a 457,000-square-foot fulfillment centre at its new Le Campus Henry Ford. The development is part of Walmart’s plan to spend $1 billion on its Canadian infrastructure during the coming year.

The more-than-$100-million Walmart facility will anchor the Henry Ford industrial park, at the intersection of Harwood and Henry Ford Streets along the Hwy. 30 corridor. Harden has plans to construct up to five additional buildings at the park, for a total of almost a million square feet of mainly logistics space.

“This announcement is very important for the history of our company,” Harden co-CEO Tyler Harden told RENX in an interview. “We feel that with our retail experience we are well-positioned to get into industrial.

“That basically is due to the longstanding relationships we’ve had for a very long time in the markets. That’s why we decided to make the leap into industrial.”

The property was acquired by Harden in 2017 and the firm has been waiting for the right moment to take it to market. It offers excellent access to Hwys. 20, 30 and 40 to serve both the Quebec and Atlantic Canada markets, as well as reaching the U.S. border region.

Site work is underway and the facility is to be turned over to Walmart in February 2024. Harden’s in-house construction division will manage the project.

“They will fixture it with their (Walmart) technology and robotics that will be housed in the premises,” Harden explained. “Our intention is to hold that for the long term.”

Plans and specifications are being finalized, Harden said, but a portion of the building will have a green roof and it will be LEED certified – though the level is yet to be determined.

The building will have about 45 per cent site coverage and offer 225 vehicle parking stalls in addition to accommodating over 100 trucks. It will offer 40-foot clear heights in the single-storey warehouse portion, while the office area will be two storeys.

In Montreal’s burgeoning light industrial sphere this is only the beginning for Harden, which has a long history in the retail and retail CRE sectors, and also has multiresidential holdings.

The firm has about two million square feet of industrial capacity in its development pipeline (including Le Campus Henry Ford) and Harden said it plans to grow the sector.

“Our vision is to continue to grow in the industrial-asset class and more specifically in logistics uses. This is a sector which we feel very strongly and bullish about,” he explained.

“It’s one where we feel it’s a natural fit to complement our current model from a retail perspective.”

The firm has long-established contacts with many retailers. And, it will also soon manage one of Walmart’s other Canadian stores.

As part of its facilities management agreement with RioCan REIT in Quebec, it will assume responsibility for La Gappe in Gatineau on Oct. 1. Walmart anchors the shopping centre.

The investment is also significant for Walmart, being its first fulfillment centre in the province.

“This important investment is the latest example of Walmart’s commitment to Quebec,” said Cyrille Ballereau, Walmart Canada regional vice-president for Quebec, in a release.

“We are investing for growth in Quebec and creating jobs for Quebecers to better serve our customers. Quebecers will see refreshed stores, quicker service and more options available in-store and online.”

The facility will have the capacity to store a half-million items to fulfill direct-to-home and in-store pickup orders and be capable of shipping 20 million items annually.

Walmart says its $1-billion investment across Canada includes updating and remodelling a record 80 stores this year from Port Alberni, B.C., to Carbonear, N.L.

“These projects are all part of Walmart Canada’s multi-year $3.5 billion investment to make the online and in-store shopping experience simpler, faster and more convenient,” a Walmart release states.

Established in 1985, Harden is a second-generation family-owned real estate company whose primary objective is to own and operate commercial, residential and industrial properties in communities throughout the provinces of Québec and Ontario.

Its vertical integration allows it to specialize in all facets of the real estate development process, including development, construction, leasing and property management.

With more than 100,000 associates, Walmart Canada is one of Canada’s largest employers and is ranked one of the country’s top 10 most influential brands.