If we want affordable housing, the numbers must work for everyone 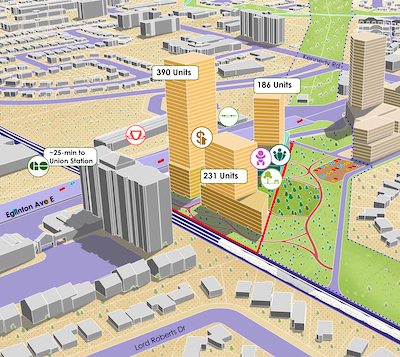 The North Parking Lot at Kennedy Station in Toronto is one of six sites proposed for Phase II of city’s “Housing Now” initiative. For a full-sized rendering of this proposal from HousingNowTO including a key to the symbols, click this link. (Courtesy Smart Density)

“Housing Now” is a major piece of the city’s HousingTO 2020-2030 Action Plan, which has an ambitious target of delivering 40,000 new affordable rental homes, including 18,000 supportive homes, over the next 10 years.

In order for these mixed-income affordable-housing projects to be successful, the numbers have to work for everyone – the city, private developers and not-for-profit operators of affordable rental housing.

Furthermore, the city has offered land for development under 99-year ground leases, which allow it to maintain control over public land assets for the benefit of future generations.

Through the Housing Now initiative, Toronto was able to successfully tap into one of its vastly under-utilized resources – surplus city-owned land.

A report by the Centre for Urban Research and Land Development (2019) noted that CreateTO, the public agency that manages the city’s portfolio of real estate assets, is estimated to have approximately 210 acres of land for sale or lease.

Of this, 124 acres are already zoned for mixed-use or residential.

Therefore, the opportunity exists to capitalize on these lands in a big way – if the city plays its cards right.

Looking back at Phase I of Housing Now, we know the plan faced many challenges.

Community consultation meetings and discussions over built form and density add years onto building timelines, which is especially concerning for a type of housing for which the need is severe.

NIMBYism will be difficult to accommodate if we are to meet the city’s goal of building 40,000 new affordable units by 2030.

Existing planning mechanisms which prioritize “protecting” single-family homes from nearby development cannot be reasonably sustained for lands near transit.

Casting shadows on the flower beds of those who enjoy the luxury of living in a single-family home next to a subway station might need to be an acceptable outcome.

Toronto has not built large quantities of affordable housing at speed or scale in around 40 years, and organizationally, we’ve lost a lot of the muscle memory to do so.

It’s no secret we need to reform our processes to quickly zone, approve, permit and build higher-density affordable housing.

These targets are not impossible as long as the political will is present to change the defaults on how affordable housing is handled and bypass restrictive policies which prevent us from achieving the density needed to make these projects viable.

For instance, Edmonton council recently voted to remove minimum parking requirements from its zoning bylaw, which took effect on July 2.

If Toronto follows suit, it could shave millions of dollars off the cost of new housing development and shorten timelines for project completion.

Unfortunately, almost all initial unit targets proposed in 2018 for the 11 Housing Now Phase I sites were significantly less than what the actual housing opportunities on those sites could have offered.

In response, HousingNowTO, a volunteer organization of local housing advocates, conducted site assessments for the six Phase II sites. As a full disclaimer, I am one of the volunteers and we (Smart Density) have been heavily involved with this pro bono consultation.

HousingNowTO concluded there is room to effectively double the total estimated unit counts proposed by CreateTO. This would add almost 3,600 new units, including over 1,200 affordable units.

The HousingNowTO volunteers recently submitted a 46-page proposal as an Annual Progress Report item on June 15, 2020. We hope the city realizes it cannot afford any further missed opportunities.

Mark Richardson, technical lead of HousingNowTO, said it best as he spoke to councillors making their submission this June: “In round one of HousingNow, the city’s unit targets have been consistently 30 per cent under global-best practices . . . we have to maximize the number of units on every site that is proposed.”

One of the six sites is the 2.9-acre Kennedy Station North Parking Lot.

As part of the HousingNowTO submission, this planning report demonstrates a vision to maximize city-building and affordable-housing opportunities on the site.

This site enjoys a high level of current and planned future transit options. It lies directly across from the Kennedy Mobility Hub, which includes the Kennedy Subway Station and bus terminal, the Kennedy GO Station, as well as the planned terminus of Phase I of the Eglinton LRT.

The plan for the site includes three towers, of 19, 20, and 36 storeys, containing a total of 807 units (269 will be made affordable). The Don Montgomery Community Centre was also relocated to the site as per the recommendation of the Kennedy Mobility Hub Master Plan.

In total, the project has a Floor Space Index of 7.5 and a residential GFA of just under 680,000 square feet.

It is clear Toronto has a long way to go if it intends to meet its 2030 affordable housing target.

Although the city has made some positive forward progress, we must still do far more to treat the affordable housing crisis with the urgency our politicians regularly say it deserves.