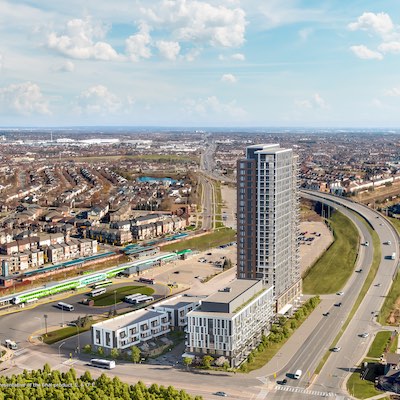 Choice Properties Real Estate Investment Trust and The Daniels Corporation plan a fall launch for Mount Pleasant Village, a master-planned community that will include one of the first new purpose-built rental apartment buildings in Brampton in the past 15 years.

“Daniels has an outstanding and recognizable city-building reputation and is so respected,” Choice vice-president of development, design and engineering Amy Chan told RENX. “They’re very much a soup-to-nuts type of developer and we love that they’re such an expert in from-start-to-finish development.”

Choice (CHP-UN-T) owned the greenfield site on Bovaird Drive, just east of Creditview Road and adjacent to the Mount Pleasant GO Transit station. Daniels was brought in as a partner in 2018.

Chan said the site is also close to retail, a community centre, a library, an elementary school, sports facilities and a public square. It’s surrounded by 4,000 acres of parkland with more than 90 kilometres of trails. It’s also a short drive from the 400 series of highways in the northwest Greater Toronto Area.

Daniels will be the development manager and construction manager for Mount Pleasant Village, which will have three major components encompassing around 300,000 square feet of gross leasable area.

A six-storey condominium will have 106 units, ranging in size from studios to two bedrooms. The one- and two-bedroom suites will be part of Daniels’ Accessibility Design Program, which Chan said goes over and above the barrier-free requirements in the Ontario Building Code.

There will also be two blocks of 36 stacked, back-to-back one- and two-bedroom townhomes. Chan said they’ll be “very generously sized” and “very much suitable for growing families with children.”

Pricing for the condo and townhomes will be released in the coming months and they’ll go on sale this fall.

Choice and Daniels are 50-50 partners on a 26-storey, 302-unit apartment where suites will range in size from studios to three bedrooms. Many of the suites will also be part of Daniels’ Accessibility Design Program.

The apartment building will utilize geothermal heating and cooling technology. Chan said Choice investigates the possibility of incorporating the technology into all of its new developments.

“It’s something that’s going to continue to be in our portfolio for a very long time, so the investment in geothermal is something we’re quite proud of.”

Rental residents will have access to: a theatre room; a gym facility; a co-working space; a party room; and a multi-purpose room that can be activated for community events and programming. There will be separate parcel rooms for rental and condo residents.

Exterior green space, which will be accessible to the community, will include a children’s play structure.

Construction has started at Mount Pleasant Village and occupancy is expected in mid-2023.

Choice and Daniels announced at the end of March they’ll also partner to redevelop the 19-acre Golden Mile Shopping Centre.

The first phase of the Golden Mile redevelopment will include 44- and 38-storey condo towers, a 44-storey purpose-built market rental apartment, street-level retail, institutional uses and office space. There will be approximately 1,450 residential units, about two-thirds of them condos.

Choice owns and manages a portfolio totalling more than 65 million square feet of retail, industrial, office and residential assets across Canada. It benefits from a strategic relationship with retailer Loblaw Companies Limited, which has more than 2,400 stores across Canada.

Daniels has built more than 30,000 new homes and apartments, master-planned mixed-use communities and commercial and retail spaces across the Greater Toronto Area.

It partnered with Toronto Community Housing to revitalize 53 of the 69 acres in Toronto’s Regent Park neighbourhood and is the developer of the TIFF Bell Lightbox/Festival Tower Condominiums project and the City of the Arts community on Toronto’s east waterfront.

RENX Staff Residential Transactions Ontario Jun. 8 2021
Steve McLean Business reporter
Steve is a veteran writer, reporter, editor and communications specialist whose work has appeared in a wide variety of print and online outlets. He’s the author of the book Hot Canadian Bands and has taught reporting to college students. He is based in Toronto.