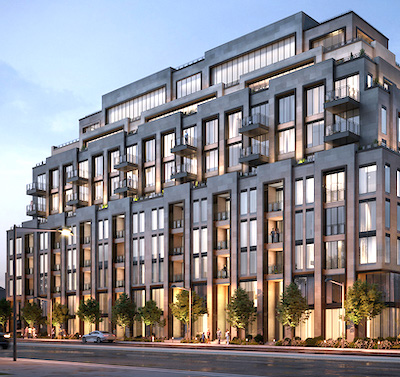 Early sales have been strong for Altree Developments’ Forest Hill Private Residences, a luxury condominium president and chief executive officer Zev Mandelbaum calls “my marquee project and the one I hold closest to me.”

The nine-storey building at 2 Forest Hill Rd. in Toronto is marketing a mix of townhomes and condo suites ranging in size from 750 to 2,400 square feet and priced from $1.8 million to more than $6 million. There were originally going to be 94 suites, but Mandelbaum said that number is now in the mid-80s as some purchasers are buying multiples and combining them.

Mandelbaum cited one purchaser who wants the low-maintenance condo lifestyle and all of the high-end amenities but doesn’t want to downsize in a major way. This buyer is combining three suites into one.

“More and more end-users are coming straight into pre-sale condominiums and coming in early, so they can customize their units and suites and get specifications,” said Mandelbaum. “In a building like Forest Hill, we’ll customize anything you want.”

Altree and the Forest Hill assembly

While Zev Mandelbaum still owns a portion of Marlin Spring’s projects, he left the company to launch Toronto-based Altree in late 2018.

Demolition is projected to start at the end of this year and construction is anticipated to begin in the spring. Late-2023 occupancy is being targeted.

With more people of substantial financial means spending more time at home and less time in their offices due to COVID-19, Mandelbaum said there’s a demand for luxury and hotel-like amenities from the demographic group that has largely been unaffected by the recession.

Graziani & Corazza Architects and interior design firm U31 are responsible for the look of the building.

Amenities include: 24-hour concierge and valet service; a main lobby lounge; a separate service lobby; three elevators; a temperature-controlled wine library with sommeliers; a private gym with services offered from personal trainers, massage therapists, nutritionists, and yoga and Pilates instructors; a dining area with a 20-seat table, caterers’ kitchen and lounge; a swimming pool; and wet and dry saunas.

“This building is so unique that it will remain unique forevermore and can’t be duplicated, because there’s not a lot of land in the Forest Hill community that can be developed into a condominium of this magnitude with this many amenities,” said Mandelbaum.

He described the building as an “art piece.”

Sales are being conducted by appointment only, which is only partially attributable to COVID-19 health concerns.

“Given the nature of the product, it needs that class and needs that individual one-on-one attention, because that’s what the building is about,” said Mandelbaum.

Altree has two other current condo projects, and others that are going through the application process, according to Mandelbaum.

Thirty Six Zorra will be a 35-storey tower anchored by a seven-storey podium in Toronto’s Etobicoke Queensway neighbourhood,

The underground parking component is under construction and, when completed, the building will include 340,000 square feet of gross residential floor area with a mix of more than 400 studio, one-, two- and three-bedroom units.

Mandelbaum said 20 per cent of the units are being held back to sell later, but the rest are sold.

Highland Creek covers 3.05 acres at 1625 Military Tr. and 6000 Kingston Rd., south of the University of Toronto Scarborough campus. It will consist of two buildings with approximately 500 units ranging in size from 425 to 875 square feet.

The site is going through the zoning process and a community consultation meeting is coming up. A sales pavilion is being built and site work is starting. Mandelbaum hopes to launch sales next year.

Mandelbaum said Canada’s reputation as a safe and stable country, its welcoming of immigrants and the importance it places on home ownership will ensure a bright future for his company and other local developers.

Steve McLean Residential Development Toronto / GTA Sep. 21 2020
Steve McLean Business reporter
Steve is a veteran writer, reporter, editor and communications specialist whose work has appeared in a wide variety of print and online outlets. He’s the author of the book Hot Canadian Bands and has taught reporting to college students. He is based in Toronto.