Gary Switzer co-founded MOD Developments in 2009 after 21 years at Great Gulf, where he started t... 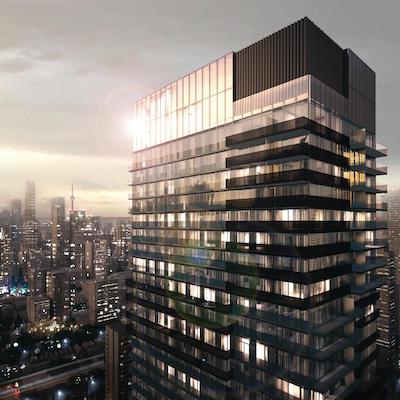 Artist’s rendering of the 55C residences being built by MOD in Toronto. (Courtesy MOD)

Gary Switzer co-founded MOD Developments in 2009 after 21 years at Great Gulf, where he started the company’s high-rise division before setting out on his own with partner Noorez Lalani.

So it’s no surprise their new company jumped right into high-rise construction, which continues today.

Subsequent Toronto developments have included The Massey Tower, Waterworks, collaborations with Tricon House on The Selby and The Taylor at 57 Spadina, and MOD’s latest condo project the 55C Residences.

Lalani had worked in the corporate finance and commercial real estate group of a prominent Canadian law firm, and as an account manager for the Toronto Dominion Bank real estate group prior to joining Switzer as president of MOD.

“Our interest and our expertise has always been in doing urban projects,” Switzer told RENX. “We have experience in high-rise, particularly with a focus on design and good architecture.”

“A number of our projects have involved heritage buildings, which we like doing and we think it adds to a project. We’re planning on continuing along the same vein in terms of more and more projects. As sites get more and more difficult and more challenging, we’ve got the expertise.”

The 48-storey, 551-unit 55C Residences at 55 Charles St. E. reached a sales threshold this summer where MOD was comfortable to begin demolition of the nine-storey, 76-unit and three-storey, 24-unit apartment buildings that occupied the site. Existing tenants have the right to return to 55C Residences when it’s completed, which is scheduled for the fall of 2023. 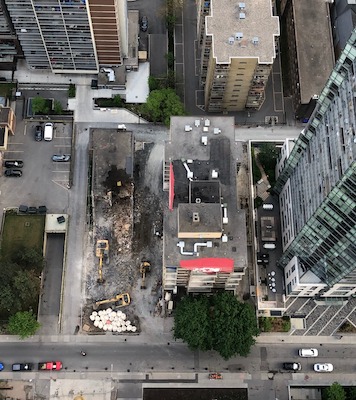 This aerial view shows the demolition site at 55 Charles St. E., where MOD is building the 55C condos. (Courtesy MOD)

Eighth floor amenities will include a variety of lounges, a kitchen, dining and study areas, barbecue areas, a gym, wellness facilities, steam rooms and change rooms. The roof will feature a 20,000-square-foot indoor-outdoor lounge with fire pits. The building will have 24-hour concierge service.

The condo was designed by architectsAlliance, Cecconi Simone is the interior designer and Janet Rosenberg & Studio is the landscape architect.

The building’s location near Bloor and Yonge streets is close to public transit. Shopping, restaurants, museums, hotels, universities and hospitals are all within easy walking distance.

“Charles (Street) has a proven track record of high-rise development, and this was really the last development site on Charles,” said Switzer.

The Massey Tower and Waterworks

The Massey Tower is a 60-storey, 697-unit condo at 197 Yonge St. across from the CF Toronto Eaton Centre which integrates a former Canadian Imperial Bank of Commerce building dating back to 1905.

“Massey Tower is already registered, turned over to the condo corporation and occupied,” said Switzer of the Hariri Pontarini Architects and Cecconi Simone-designed project that began in 2012.

The City of Toronto’s 1932-built Art Deco Waterworks Building at 505 Richmond St. W. is incorporated into Waterworks, which is being co-developed with Woodcliffe Landmark Properties.

The Diamond Schmitt Architects, ERA Architects, Cecconi Simone and Janet Rosenberg & Studio-designed Waterworks will include 288 residential units, a YMCA, restaurants and a food hall located in the original mechanical hall.

Switzer said there are a few unsold units left in the terraced, mid-rise condo. Waterworks is topped off and its windows are going in.

The Selby and The Taylor

MOD is a partner with lead developer Tricon on The Selby and The Taylor at 57 Spadina.

The Selby is a 50-storey, 441-unit rental complex under construction at 592 Sherbourne St. Designed by bKL Architecture and integrating the heritage Gooderham mansion, this project is now renting.

The Taylor is a 36-storey, 286-unit purpose-built rental at 57 Spadina Ave. near King Street West designed by Diamond Schmitt. Construction started in 2018 and is due to be completed next year.

MOD recently acquired a development site on Redpath Avenue — just north of Broadway Avenue, and not far from the future Eglinton Crosstown light rail transit line and within walking distance of shopping and restaurants.

“We’ve applied for rezoning for a 35-storey building on a site that has an existing rental building,” said Switzer. “We’d be using the same model as on Charles, where the units would be replaced and a new building would be built in its place.”

“We’ve always taken pride in being very transparent in delivering quality and exactly what the purchaser is expecting. That’s also given us a good reputation with the city.”

EDITOR’S NOTE: This article was updated to include additional information about the founding of MOD.

Steve McLean Residential Development Toronto / GTA Sep. 3 2020
Steve McLean Business reporter
Steve is a veteran writer, reporter, editor and communications specialist whose work has appeared in a wide variety of print and online outlets. He’s the author of the book Hot Canadian Bands and has taught reporting to college students. He is based in Toronto.