One of Canada’s most iconic apartment and mixed-use communities, the Cherryhill Village in London... 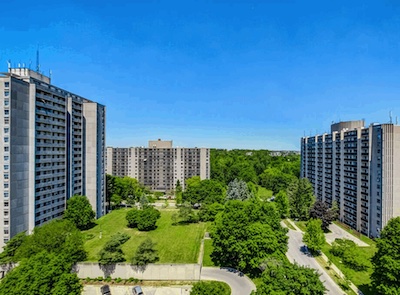 One of Canada’s most iconic apartment and mixed-use communities, the Cherryhill Village in London, Ont., has been sold in a record-setting $571-million transaction.

“Based on Altus Group sales records commencing in 1995, the sale of Cherryhill Village will be the largest reported single multiresidential asset transaction in Canada both in terms of number of suites (2,114) and dollar value,” said TD Securities managing director David Bloomstone in an exchange of emails with RENX.

Bloomstone and the TD Securities team brokered the transaction on behalf of Minto, which had owned/managed the properties for over a decade.

The purchaser, Park Property Management, is a Canadian-based entity owned by the Otto family of Germany. Founded in the 1960s by Werner Otto, who died about a decade ago, the firm is still operated by family members.

Park Property Management has about 300 employees.

This is the second major transaction involving Otto family holdings in Canada in recent days. The family’s industrial division, Sagitta Development and Management, closed on the sale of a $461-million Greater Toronto Area industrial portfolio to two KingSett Capital funds on Friday.

He said Sagitta is being wound down as a result of the industrial divestment and the business will now focus on Park Property’s multiresidential portfolio in Canada. He noted that it’s actually a return to the company’s roots.

“Werner Otto, the founder of the company, started buying real estate in Canada in the 1960s. First it was all residential rental buildings, but then they expanded into industrial. They developed and bought industrial buildings,” Wengler explained.

“The residential rental apartment part has grown much further and for at least 20 years we really haven’t bought any industrial.”

Wengler said this portfolio is attractive for several reasons, including a potential future value-add on excess land at the 40-acre property.

“It’s in pretty good shape, but since we’re long-time holders and a family business, we will make sure that everything’s in good shape and will stay that way for many decades to come,” Wengler said. “There’s also an opportunity to develop and build even more apartments, which is something we will look into in the future.”

Bloomstone said there is capacity to essentially double the amount of apartments in the community, with up to 2,050 new units in multi-phased developments.

The commercial aspects of the property are an add-on for Park Property. The shopping centre has 22 tenants and the office building is focused on health-related businesses. Together they comprise about 190,000 square feet of space.

“When we acquire apartment buildings there are sometimes small office or retail components that come with them, but they’re nothing that we’re really interested in (buying as standalone assets),” he explained.

Cherryhill Village has a history which stretches back almost 60 years.

“Cherryhill Village is a landmark, master-planned residential community which has been a part of London’s history since the 1960s,” Bloomstone noted. “It is a well-known and respected community both within London and Ontario.”

Derek Lobo, the CEO of SVN Rock Advisors in Burlington, said the community was built between 1965 and 1975 by European immigrants Sam Katz and Ewald Bierbaum.

His firm brokered the 2011 transaction to Minto (for $215 million, also a record for a single apartment property transaction at the time) and was an advisor to TD Securities for the latest sale.

“We initially sold the property in 2011, and it was the largest single apartment transaction in Canada at the time,” Lobo wrote in an email exchange. “It’ll likely be the largest again this year.”

“What makes Cherryhill unique (is) not just its size, but it’s a naturally occurring retirement community,” he added.

Such communities aren’t originally designed for seniors, but due to local conditions, the neighbourhood and amenities will attract these types of residents over a period of time.

Bloomstone said the timing for such a transaction in London is opportune.

“The opportunity to acquire scale in a singular transaction that has both upside in rents and densification opportunities was attractive to a wide range of investors both public and private,” Bloomstone wrote.

Long known as a city with a significant apartment market, London has plenty going for it, including a rising population and strong local economy.

Its population is expected to grow by almost 12 per cent during the next decade, which would push it to over 600,000 residents.

“Given the low vacancy rates, growth of new industries such as agri-food, digital media and technology, along with the stability of the health and education sectors, London is well-positioned to continue to support strong rental dynamics including the construction of purpose-built rentals,” Bloomstone wrote.

– With files from Steve McLean