NYX Capital Corp. and Bluebird Self Storage have expanded their partnership with an $81-million d... 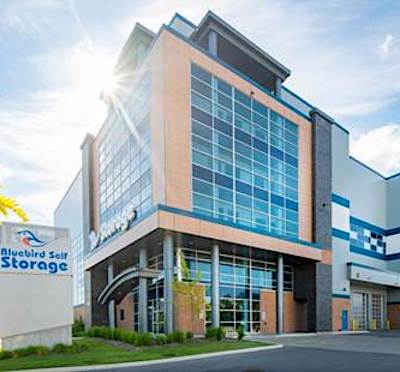 19 Esander Dr. in Toronto is one of three Bluebird Self Storage locations in the GTA acquired by NYX Capital. (Courtesy NYX)

NYX Capital Corp. and Bluebird Self Storage have expanded their partnership with an $81-million deal for three Greater Toronto Area (GTA) facilities.

“We’re planning to increase our portfolio across Canada, but particularly in the GTA, and this was a great opportunity to scoop up three assets at the same time once we found out that the current owners were interested in disposing of them,” NYX chief executive officer Yashar Fatehi told RENX.

The three Bluebird-branded self-storage facilities were sold by WP Carey Inc., which was founded in 1973 and owned 1,215 net lease properties of various types, comprising 142 million square feet in 25 countries, as of Sept. 30, 2020. The New York City-headquartered company became a real estate investment trust in 2012.

Fatehi said WP Carey wanted to dispose of Canadian assets as part of a new business strategy. Since the two companies had an existing relationship and WP Carey knew NYX would likely have an interest in the three properties, it approached the firm and a deal was quickly achieved.

“They could bypass all of the marketing and going through the headaches of taking the assets to market by doing a private deal directly with us,” said Fatehi.

They’re developing a five-storey, 169,000-square-foot facility consisting of 1,220 climate-controlled units and 26 drive-up units on 2.6 acres at 2068-2078 South Sheridan Way in Mississauga that’s expected to be completed this fall.

About the three new self-storage acquisitions

NYX was attracted to the locations and conditions of its three new self-storage acquisitions. The fact they are already Bluebird-branded will make for an easy transition.

“It was recently built and is not yet full, but we’re very hopeful that we can increase the occupancy,” said Fatehi.

The newly built facility at 411 Cityview Blvd. in Woodbridge, a suburb of Vaughan, has 112,000 net rentable square feet and is about 70 per cent occupied.

The third facility, at 1230 Lakeshore Rd. E. in Mississauga, is a retrofit of a former industrial building converted to self-storage use. It has 84,000 net rentable square feet and is 80 per cent full.

“They’re all nice-looking and brand new-looking,” said Fatehi. “All we have to do is manage them and increase occupancy and increase income.”

NYX is a private equity real estate investment firm with a portfolio of commercial, residential, industrial and self-storage development projects. It has $620 million in assets under management.

The Toronto-based company wants a mix of development and income-producing properties for a balanced portfolio. It’s actively looking for more self-storage development sites or existing facilities.

“These are good assets for investors to generate a healthy return,” said Fatehi. “We’re looking to expand our portfolio from coast to coast as part of a bigger strategy that we’re chasing after.”

Fatehi is hopeful of announcing new acquisitions this year.

Steve McLean Residential Redevelopment Toronto / GTA Dec. 18 2020
Steve McLean Business reporter
Steve is a veteran writer, reporter, editor and communications specialist whose work has appeared in a wide variety of print and online outlets. He’s the author of the book Hot Canadian Bands and has taught reporting to college students. He is based in Toronto.