Ken Silver has announced he will retire in the spring of 2022 from his role as CEO of CT Real Est... 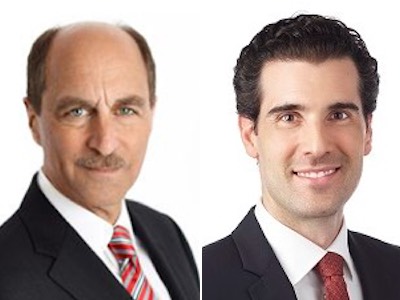 Ken Silver, left, will retire and be succeeded by Kevin Salsberg as CEO of CT REIT on May 1. (Courtesy CT REIT)

Ken Silver has announced he will retire in the spring of 2022 from his role as CEO of CT Real Estate Investment Trust (CRT-UN-T). He will be succeeded by Kevin Salsberg, currently the REIT’s president and chief operating officer.

In a separate announcement on Thursday, Melcor REIT (MR-UN-T) said former CEO Andrew Melton will return to the position on an interim basis to replace outgoing Darin Rayburn, who announced his pending retirement earlier this year.

Silver’s retirement will be effective May 31, but he will remain on board as a strategic advisor to CT REIT for an additional year.

“I have been extremely fortunate to work with great teams, especially the team at CT REIT, and look forward to transitioning the leadership of the REIT to Kevin’s exceptionally capable hands.”

He has led CT REIT since its 2013 IPO and was instrumental in its creation by Canadian Tire Corp., the REIT’s largest tenant and majority unitholder. He had joined CTC in 1995 and prior to his appointment as president and CEO at CT REIT, he served as CTC’s senior vice-president, corporate strategy and real estate.

“Ken’s contributions to CTC and then to CT REIT have been immense,” said Greg Hicks, the president and CEO of Canadian Tire Corp., in the announcement.

“He has been a highly valued and respected member of our leadership team for over 26 years and is responsible for leading the development of our store and distribution centre networks across the country, the prime locations of which play a significant role in our competitive advantage.

“We are grateful for his deep and strategic real estate knowledge and the sage counsel he has provided over the years.”

CT REIT currently holds a portfolio of over 350 properties, totalling about 29 million square feet of GLA. It consists primarily of net-lease, single-tenant retail properties across Canada with the majority containing or anchored by Canadian Tire stores and/or its family of retail banners.

“Since its creation, CT REIT has delivered what it set out to do – providing unitholders with reliable and growing distributions. Its outstanding track record in creating value for unitholders and its position as Canada’s premier net lease REIT are due to Ken’s vision and leadership for the past eight years,” said David Laidley, the chair of the CT REIT board, in the release.

“We have benefited greatly from his wisdom and experience and are grateful for his continued support throughout this transition.”

Salsberg steps in to CEO’s role

Salsberg joined CT REIT in 2016 and has nearly 20 years of commercial real estate experience. Prior to joining CT, he was the executive vice-president and chief investment officer at Plaza Retail REIT, and the chief operating officer at KEYreit.

“The board has every confidence in Kevin’s leadership. He has made major contributions to CT REIT since he joined the management team, particularly in significantly growing the portfolio and developing new organizational capabilities,” Laidley said in the release.

“We look forward to continuing to work with him in this new position as president and CEO of the REIT as he builds on its record of success.”

During his time with CT REIT, Salsberg has overseen all aspects of its real estate portfolio and has led the teams which manage investment, leasing, asset management and development and construction activities.

He has also played an active role in the creation and execution of the REIT’s long-term corporate strategy.

Meanwhile, Melton will return to a familiar role at Melcor on Jan. 1. He has more than three decades of commercial real estate experience and was previously CEO from 2017–’19 and has been a trustee of the REIT since inception.

He was instrumental in the formation of the REIT and served as its inaugural board chair until 2017. Melton is to serve as a transitional CEO for Melcor.

The REIT’s board also announced the appointment of Bernie Kollman, ICD.D to the board. Kollman retired from a senior executive position with IBM and brings extensive board experience at both corporate and community-focused organizations.

“We are grateful to Andrew for accepting this role once again,” said Ralph Young, Melcor’s board chair, in the announcement.

“Mr. Melton has always been part of the REIT story and his familiarity will contribute to a seamless transition while we look for a new executive for the REIT.”

Its portfolio is comprised of interests in 39 properties, representing approximately 3.2 million square feet of gross leasable area across Alberta and in Regina and Kelowna.

Darin Rayburn steps aside after 19 years with Melcor