BentallGreenOak has spent $170 million to acquire a six-building industrial portfolio with 767,56... 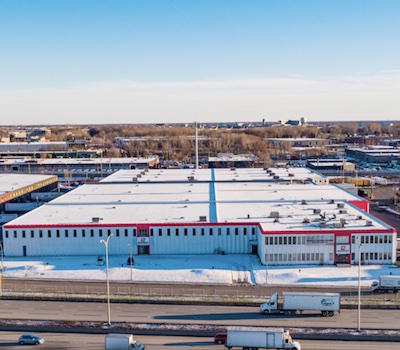 1600 Trans-Canada in Dorval in the Greater Montreal Area has been acquired by BentallGreenOak from Camco. (Courtesy CBRE)

BentallGreenOak has spent $170 million to acquire a six-building industrial portfolio with 767,564 square feet of gross leasable area on the Island of Montreal.

BentallGreenOak is expected to close on a seventh building in the so-called Camco industrial portfolio by the end of the year.

“We’re growing our position in Montreal. These are strategically located sites on the island,” said Michael Fraidakis, managing director, head of Canadian investments at BentallGreenOak, in an interview with RENX.

With the transaction, BentallGreenOak now has 4.5 million square feet of industrial properties on the Island of Montreal.

The buildings, of which five are on the West Island and one in the east end, are fully leased. They represent most of Camco’s industrial portfolio, said Scott Speirs, Montreal-based vice-chairman of CBRE, the broker who handled the transaction.

Buildings near-vacant when bought by Camco

Camco, which sells and distributes clothing to large national brands in Canada and the U.S., acquired most of the buildings within the last five years when they were vacant or nearly vacant. The company then renovated and re-leased the buildings, Speirs said.

Speirs said the buildings were built from the 1970s to the early 2000s, have ceiling heights of up to 28 feet and serve as high-quality logistics distribution properties.

Camco did a “significant” amount of capital expenditure work on the buildings, ranging from roof replacements to repaving, he said.

“The buildings have been very well-maintained by the vendor” and, despite being older, are of institutional quality, said Jeff Larcina, principal of investment at BentallGreenOak.

Only minor improvements are required and the buildings are well-positioned for last-mile distribution, logistics and other uses, Larcina said. In addition, there is room for minor expansions at some of the sites, said Fraidakis.

Larcina said the West Island properties are in “fantastic locations that will always be in demand.”

Two of the buildings will be close to REM stations, Montreal’s upcoming light-rail system, the CBRE brochure for the portfolio sale states.

The bidding process for the portfolio took place during the spring and the sale was completed this month, Speirs said. Interest in the properties was strong, primarily from Toronto-based institutions, and the competition was very tight, he said.

The rents were 33 per cent below market rates when the bidding process took place, Speirs said, “and even more below market today because the rental market continues to accelerate in the GMA (Greater Montreal Area).”

Although the weighted average lease term for the buildings is 7.7 years, there is a mix of long- and short-term leases, with the shortest term being less than four years. This will give BentallGreenOak “the ability to grow the rents incrementally,” he said.

Speirs said in the past year Montreal has experienced “amongst the strongest rental growth of any market in the world for industrial. That is attracting significant interest from a wide variety of investors, whether it be domestic institutions, domestic private capital or also some foreign groups.”

Average net industrial rents for the GMA have increased by 94 per cent since 2016, according to the CBRE sales brochure: “Rental growth rates have been stimulated by the limited availability of existing industrial space and the scarcity of new developments, caused by a reduced supply of serviced and/or zoned sites,” it notes.

With a vacancy rate of around one per cent in the GMA, “the space markets are very, very tight” for industrial in Montreal, Fraidakis said.

“There are limited options for tenants and users, especially on the island, which makes it a very attractive investment category right now.”

Danny Kucharsky Commercial Downtown Greater Montreal Sep. 14 2022
D
Danny Kucharsky Business reporter
Danny is a multiple award-winning journalist based in Montreal, who has written for about 75 magazines and newspapers in Canada and the U.S. His credits include The Globe and Mail, Montreal Gazette, Maclean's, Chicago Tribune and a wide variety of business, specialized trade and medical magazines. Danny was also the Montreal correspondent for Marketing Magazine for several years.