Calgary’s depressed downtown office market is forecast to hit the 30 per cent vacancy level by co... 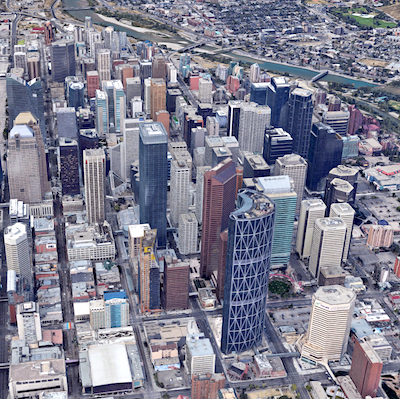 Calgary’s depressed downtown office market is forecast to hit the 30 per cent vacancy level by commercial real estate firm Avison Young. In its Q4 and year-end 2020 report, AY predicts the city’s downtown will cross into unseen territory for a major office market in Canada within the next 12 to 24 months.

Todd Throndson, managing director, principal, for Avison Young in Calgary, said the market is being hit by the triple whammy of the struggling oil and gas industry, the ongoing pandemic and the related work-from-home trend.

“Whatever direction they think they’re going, positive or negative, is going to dramatically change the market,” said Throndson of the oil and gas sector, a “massive player” in Alberta’s economy.

“I believe at this point and time we do not expect there to be any growth in that industry. So some of the engines that have created positive growth in the past are just not going to be there for the foreseeable future until that industry can find a way to either get more support politically, or find different ways to develop their business, expand their business and become growth engines for employment in our marketplace.

“I would say at best you’re looking at flat and at worst negative, and that’s a big question mark based on mergers and acquisitions, based on further layoffs. That industry has had to completely retrench and we do not see them as a driver of positive growth for the foreseeable future.”

Downtown Calgary vacancy at 26.9 per cent

The first quarter is likely to see a further impact as reports indicate energy giant Cenovus is cutting about 25 per cent of its workforce following the recently completed merger with Husky. That could translate into just over 2,100 layoffs.

“With average office density ranging between 150 to 250 square feet per employee, this would correlate to approximately 322,000 to 537,000 square feet of space that will no longer be required. Before entering the merger, Husky occupied approximately 600,000 square feet in the North tower of Western Canadian Place in the west end of downtown,” said Avison Young.

“These big companies they grew fast and they will shrink fast,” Throndson noted. “They have to be lean, they have to be profitable. A lot of them are publicly traded companies that have a lot of pressure on them to drive results.”

There are 16 availabilities in downtown Calgary with over 100,000 square feet as one contiguous block. These blocks of space represent 25 per cent of the total availability in the downtown market, with 66 per cent of this space available on a headlease basis, said the report.

Throndson said the west end of downtown – which contains most of the buildings below class-A – could soon experience a vacancy rate in the neighbourhood of 50 per cent.

Another key factor is the attitude toward office space in the marketplace. Many companies have experienced a different way to do business through remote work as a result of the pandemic.

“How companies deal with those issues over the next 12 to 24 months are going to have an impact on the office market. No question there’s going to be a lot of experimentation. I don’t think anybody right now has the right answer of what’s going to work for them going forward,” said Throndson.

“You’re going to see a lot of companies experiment with portions of their staff working from home.

“I do, however, think as we roll out of COVID that there will be a lot of pent-up demand for companies and businesses to find a way to get their staff re-energized, re-focused and a lot of that attention is going to be bringing them back to the office, because you have the socialization of people which everybody is craving.

“And you have communication which has worked not too badly because of Zoom and Teams . . . but you can’t communicate in the same way over a computer screen as you can have (with) people sitting around a boardroom table or a cafeteria or open seating and just having general open dialogue about the business.”

“Consequently, investment sales activity will continue to underwhelm. Properties with financially secure tenants in long-term leases generate interest. However, few vendors will choose to sell assets in a down market,” says the Morguard report.

Keith Reading, director of research at Morguard, said the owners of downtown Calgary property need to take a long-term view.

“They don’t have much of a choice at this point because the short term is as we know pretty rough. In terms of significant office building sales in downtown Calgary, I think you could very safely count them on one hand over the last probably year or so,” Reading explained.

“If you look at demand, and let’s say for argument’s sake things were to turn around really quickly with a vaccine, with the economy and with the oil sector, you’re still probably two-three years at least before you start to see some real movement in the market. There’s so much space and more to come.

“It’s not going to get better any time soon. This has got to be the worst bear market we’ve seen in Calgary ever. Calgary’s used to the boom-bust cycle, but this is a pretty big bust. But like all things, it will come back eventually. But, it really is a long-term view at this stage.

“I think you’ll probably see over the next little while a couple of buildings probably taken out of circulation and those are probably buildings that are not really up to modern standards and taking the long-term view they’ll be converted to other uses. That will certainly help pull the vacancy rate down.”

Multiple factors need for an upturn

With rental rates down and landlords offering leasing incentives, there’s no better time than now for businesses to grab office space in the core if a company has had its eye on the market.

In another just-released report on the Calgary office market, JLL Canada speculates the downtown might benefit from ongoing lower headlease rates than are currently available in the suburban markets. But unless that suburban space could be backfilled, it would just redistribute the empty office space.

Throndson said multiple things need to happen for the downtown office market to evolve, grow and change. The first is a renaissance in the oil and gas sector. The tech industry needs to continue its growth and evolution in Calgary. Educational use of office space by post-secondary institutions can help take up space.

There is also the possibility of conversions to residential or hotel space – although the hospitality industry has also been hard hit by the pandemic.

“Lastly, we’re going to need an answer to a lot of the space in the marketplace now that is going to be largely inadequate to meet the needs of tenants moving forward,” said Throndson. “Whether that’s conversion to hotel, conversion to residential, being knocked down, I don’t have the answer to that, but we have a capacity problem.

“We have too much space and that’s not likely going to change for a very long time.”

Mario Toneguzzi Commercial Downtown Calgary Jan. 26 2021
M
Mario Toneguzzi Business reporter
Mario Toneguzzi, based in Calgary has 37 years of experience as a daily newspaper writer, columnist and editor. He worked for 35 years at the Calgary Herald covering sports, crime, politics, health, city and breaking news, and business. For 12 years as a business writer, his main beats were commercial and residential real estate, retail, small business and general economic news. He nows works on his own as a freelance writer and consultant in communications and media relations/training.