Hazelview Investments and Fitzrovia Real Estate will be the co-development managers of a mixed-us... 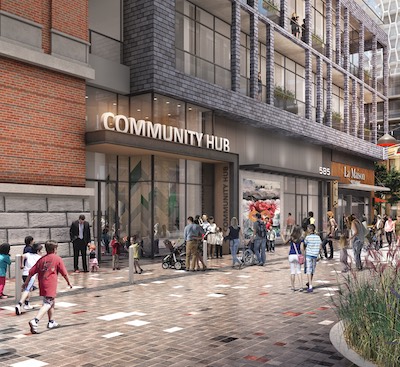 Hazelview, Fitzrovia and AIMCo will be involved in the various aspects of a mixed-use development at Bloor and Dufferin Streets in Toronto. (Courtesy Hazelview)

Hazelview Investments and Fitzrovia Real Estate will be the co-development managers of a mixed-use project at the corner of Bloor and Dufferin Streets in Toronto after the departure of Capital Developments and Metropia.

The site’s visioning and subsequent rezoning were originally led by Capital and Metropia, which were selected to develop the site in December 2016 after a competitive process, with Hazelview as lead investor.

Alberta Investment Management Corporation (AIMCo) is investing in the project on behalf of its clients and as co-owner of the site’s east parcel alongside Fitzrovia. Hazelview and its institutional partner own the property’s west parcel.

Hazelview, Fitzrovia and AIMCo bought out the previous partners to create the new ownership structure. The price of the transaction hasn’t been disclosed.

Williams said Hazelview’s relationships with Capital and Metropia remain solid, but their focus is on condominiums and Hazelview wanted to concentrate on rental apartments, so Fitzrovia and AIMCo were a better fit.

“In looking at this community, we started to realize that there’s more and more of a demand for rental housing in the City of Toronto,” said Williams.

“We know Fitzrovia is a great rental manager, so we like to partner with them. That facilitated the conversation between the groups and really kicked off the deal.”

“We all believe that Capital and Metropia did a phenomenal job of master-planning this community and we couldn’t be more excited to take it over and bring it to life,” said Rocca.

“Hazelview has been investing in, building and managing rental multi-rise for more than 20 years, and Fitzrovia has just as much experience,” said Krempulec.

“It just made sense strategically for our two firms to be leading and being the stewards of this project, given the significant amount of rental housing that will come out of this project.”

Components of the Bloor and Dufferin project

The master-planned community will include approximately 2,100 residential suites, with a mix of at least 75 per cent purpose-built rental and 25 per cent condo units.

There will also be an eight-storey building with 56 purpose-built units to be conveyed to the City of Toronto exclusively for public affordable rental housing.

– and a $17-million affordable housing trust.

Rocca said the east block will have larger suites focusing on two- and three-bedroom units aimed at young families and downsizers.

There could also potentially be an “Artists Commons” where local artists will have an opportunity to make contributions to animate the laneways within the community.

“The shared value that we have is that community is important to any project, especially one of this scale and size,” said Krempulec.

The development will benefit from direct access to the Toronto Transit Commission’s Dufferin subway station through a newly constructed below-grade pedestrian tunnel.

Block F, the affordable housing component of the project, should begin construction by August 2022 and will be among the first things built on the site.

It’s hoped that work on infrastructure and roads to enable connectivity with the surrounding neighbourhood, the park and below-grade construction on other sections will begin around the same time.

Bloor Collegiate Institute and Kent School currently occupy the property. Students have been relocated and a new school will be built nearby to the southwest of the development site.

Some Bloor Collegiate facades will be retained for heritage preservation. The entire shell of Kent School will be retained and enhanced and the community hub and daycare centre will be located there.

The Bloor and Dufferin project team

Hariri Pontarini, Terraplan Landscape Architects and ERA Architects Inc. are the architects for the Bloor and Dufferin project.

Hazelview Investments is an active investor, owner and manager of global real estate investments. It had $9.9 billion worth of assets under management on May 31, including more than 22,000 residential units in Canada.

Fitzrovia is a vertically integrated developer and asset manager of rental communities across the Greater Toronto Area, with approximately $4 billion of assets under management.

EDITOR’S NOTE: This article was updated after being published to clarify the original involvement of Capital Developments and Metropia in the partnership.

Don Wilcox Residential Transactions Oct. 1 2021
Steve McLean Business reporter
Steve is a veteran writer, reporter, editor and communications specialist whose work has appeared in a wide variety of print and online outlets. He’s the author of the book Hot Canadian Bands and has taught reporting to college students. He is based in Toronto.